The Hydrocynus Goliath, more commonly known as the goliath tigerfish, or giant tigerfish, is a vicious predatory fish found lurking in the waters of large rivers and lakes in central Africa.

They are found predominantly in the Congo River basin and Lake Tanganyika. This giant predator is one of the largest of the order of characids, which also include tetras, and piranhas.

They are thought to be one of, if not the most dangerous freshwater fish in the world. 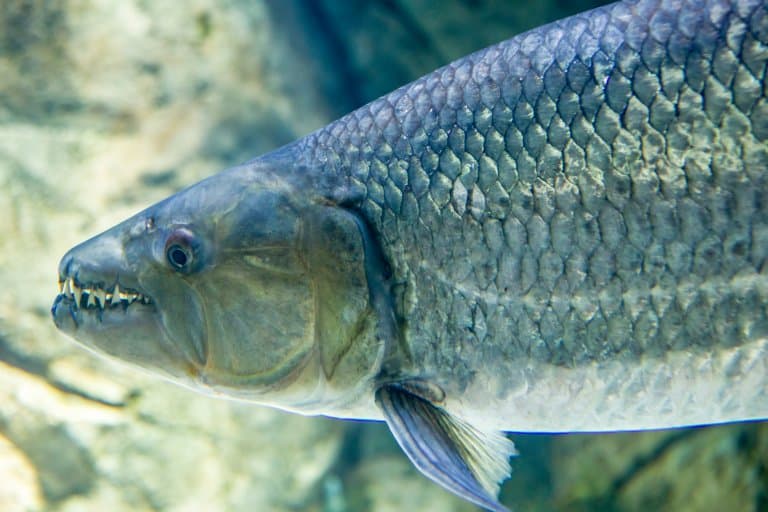 Goliath tigerfish belong to the genus Hydrocynus, which is native to sub-Saharan Africa. There are five recognised species of the Hydrocynus, including the Hydrocynus Vittatus and Hydrocynus Brevis. 1 The Latin word hydrocynus means ‘water dog’, and the term ‘goliath’ speaks to the size of this monster – referring to the biblical giant of the same name.

Adult goliath tigerfish can reach up to 5 feet in length and can weigh up to 110lbs. They have a mouth full of vicious, razor sharp teeth. The teeth interlock when the jaw is closed and protrude outward slightly from the jaw, giving a fearsome appearance. Goliath tigerfish are feared for a reason: they are the only freshwater fish in Africa with documented attacks on humans.

They are usually an olive brown moving to a pale grey in color; with red or orange fins and a black dorsal fin. The name tigerfish refers to the black stripes that are often found running the length of the creature’s sides, as well as to its ferocious nature.

Hydrocynus Goliath depend heavily on highly oxygenated and fast-flowing waters. They therefore inhabit deep river channels and open lakes. They are not found in headwaters or marshy areas.

They are extremely strong swimmers due to their preference for fast moving waters, and are therefore able to snatch their prey even in the most turbulent of water. They are piscivores, and known to prey on fish up to 40% of their body length in size.

They have few known predators, due to their size and ferocity. Their only real threat is the crocodile. However, they are a widely-prized game fish and are therefore hunted by humans.

1. They get their name from their appearance, demeanor and size

The name tigerfish is a reference to the black stripes that are often found running down the flanks of these huge fish, as well as their fierce, sharp teeth and rapacious nature; while the word ‘goliath’ refers to their giant size.

However, the nickname tigerfish is used to refer to a number of vicious, predatory African river fish.

2. Goliath tigerfish have up to 32 razor-sharp teeth

The upper jaw contains 12-20 teeth, while the lower jaw 8-14. The teeth interlock into matching indents onto the opposite jawline, and protrude slightly from the mouth.

The teeth are slightly conical in shape and can be up to 2.5cm (1 inch) in length. To put this into perspective, they are a similar size to a great white shark.

Goliath tigerfish have been known to snap their prey in half with a single bite. 2

3. They have replaceable teeth

Although relatively little study has been carried out on these elusive creatures, a study by Gagiano et al (1996) observed that captive tigerfish would replace all their teeth simultaneously within a period of 5 days, with no replacement having been observed previously!

4. They have a double hinged jaw

This means they are able to open their jaws a lot wider than other fish, and as a result its teeth point further forward when it strikes prey, allowing it to take chunks from their flesh.

5. They can grow to the size of a small adult

Although they grow slowly, the juvenile goliath tigerfish will only grow on average four to six inches per year. It can therefore take up to 10 years for the fish to reach its full size.

Tigerfish are solitary and have generally been observed alone, rather than hunting in schools or groups like their smaller cousin the piranha.

However, the females will migrate together to breed.

Female goliath tigerfish choose riverbanks or lakeshores to lay their eggs. Eggs are laid in underwater vegetation to protect them from predators as the young are not cared for by the parent fish.

The females lay a large number of eggs in order to increase the chances that some will survive to adulthood. Females can lay literally thousands of eggs – sometimes up to as many as 750,000. The fact that the nests of eggs are hidden in vegetation suggests a vulnerability in the juvenile goliath tigerfish.

8. Goliath tigerfish are predators from birth

These fish are piscivores, meaning that they feed only on fish. The infant goliath tigerfish go through a larval stage during which they feed on animal plankton.

They gradually migrate to larger fish as they grow in size and strength. They have been known to attack large animals.

9. Goliath tigerfish can turn to cannibalism

Goliath tigerfish are willing to ‘take chunks out’ of other large fish, large animals, and even each other in order to survive, although generally they only turn to cannibalism if food sources are scarce. 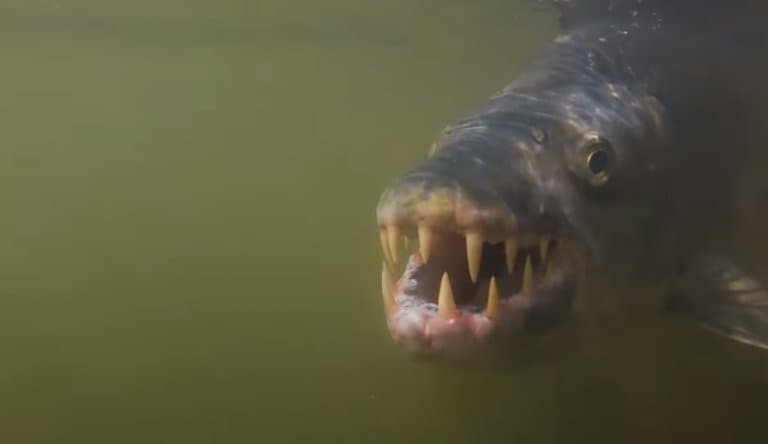 The Hydrocynus species have a dependence on well-oxygenated and/or warm, fast-flowing freshwater, confining them to large rivers and open lakes.

This is in contrast to many other species, which can tolerate a wider range of ecological conditions.

The goliath tigerfish is an elusive creature, and there is a lack of scientific knowledge about this beast.

However, it has long been a feature of myth and legend in its native Africa; earning itself the nickname ‘M’Benga’, which means ‘dangerous fish’ in Swahili dialect.

M’Benga is believed to be an evil spirit, and it has been said that it is very bad luck to spot one at the start of your journey. However, they are prized if ever caught.

12. They are the “greatest freshwater gamefish in the world”

At least, according to Bill Hansford-Steele in his ‘African Fly-Fishing Handbook’, as well as extreme angler Andy Coetzee.

Due to its size – and fearsome reputation – the goliath tigerfish has lured many a fisherman to attempt to catch the elusive beast.

A successful catch could feed many hungry mouths, especially in the rural parts of Africa where they live. The flesh of a tigerfish is said to be somewhat similar to Tilapia. 3

13. They have been reported to attack crocodiles, and humans

It is the only freshwater fish in Africa that is claimed to take lumps out of crocodiles that consider pursuing them, and even humans.

Although they are elusive, and attacks on humans are therefore rare, there are reports of natives on the Congo being bitten by these mysterious fish, and even a limited number of deaths reported.

A person on the show River Monsters reported that a goliath tigerfish was responsible for jumping out of the water and biting a man on his neck, killing him instantly.