Along a few fast-flowing rainforest streams in Equatorial Guinea and Cameroon lives a truly enormous frog.

Larger than many domestic cats, the goliath frog is unique not only in its bulk, but also in its ecology, exhibiting many adaptations and behaviours seen nowhere else among frog-kind.

The goliath frog shares the genus Conraua with six other species, collectively known as the slippery frogs, or giant frogs. They are sometimes referred to as the giant slippery frog, or goliath bullfrog.

The actual taxonomic placement of the genus is a subject of debate, with some sources placing Conraua as the only extant genus within the family Conrauidae while others place it within Petropedetidae along with three other genera.

The goliath frog is a nocturnal hunter, emerging from its riverine habitat at night to find a spot from which to ambush unsuspecting prey.

While they are omnivorous, they prefer meat and eat a wide range of animals, from spiders, insects, crustaceans, gasteropods, and reptiles.

Sadly, their numbers are in decline due to habitat destruction, hunting, parasites and disease, and they are currently classified as endangered by the IUCN redlist.

1.They are the largest living frog in the world

Even their eyes can grow as large as 2.5cm in size!

2. The goliath frog is a giant among other frogs

The largest goliath frogs are able to achieve a staggering 3.25 kilograms in weight, which is about the same as a house cat.

The really mind-blowing comparison, however, is the size difference between the goliath frog and the world’s smallest frog, Paedophryne amauensis, which weighs a miniscule 0.01 grams, making the goliath frog 325,000 times heavier than its smallest living relative. 1

3. They are not born as giants

One would imagine that the tadpole of the goliath frog must be monstrously huge compared to other tadpoles, but surprisingly this is not the case.

Goliath frog tadpoles are comparable in size to the tadpoles of medium-sized frogs- the difference is that once they reach adulthood they just keep growing. 2

Sadly they are hunted by locals for meat, where it’s considered a food source.

Natives will go out at night with nets to try and catch the goliath frogs.

Fortunately, nets are not always very effective in capturing these frogs, as they can just between 1-3 metres high and evade them!

5. They are opportunistic eating machines

If an animal fits inside a goliath frog’s mouth, it is liable to become a meal.

Goliath frogs have been observed preying upon hundreds of different species, including other amphibians, and there is anecdotal evidence that one researcher even found a bat inside the stomach of a hunted goliath frog!

The tadpoles of the goliath frog begin their life eating nothing but decaying leaves of just one species of plant that only grows along the banks of fast flowing rainforest rivers.

This is thought to be a major contributing factor to the extremely restricted range of the species.

7. Goliath frogs diversify their palate as they grow

The larger they get, however, the more they target other animals, and they have been found to develop a preference for millipedes once they reach adult size. 3 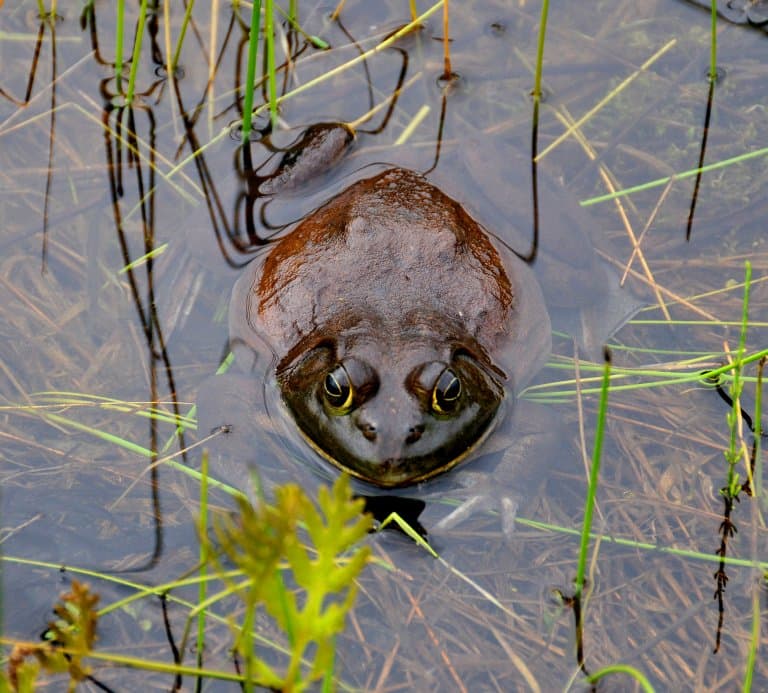 Many frogs move around to actively seek their prey, but goliath frogs take a more relaxed approach- they are specialist sit-and-wait ambush predators, only moving once prey comes within striking distance.

It is thought that this behaviour evolved because their huge size means that active foraging would consume a great deal of energy.

9. They have a novel breeding strategy

Unusually among frogs, goliath frogs construct a large nest in which they lay their eggs, sometimes thousands at a time.

The nest is dug out from the banks of fast-flowing rivers and provides the tadpoles with protection from both the current and many potential predators. 4

10. They are surprisingly athletic

Despite their sluggish appearance, goliath frogs are powerful animals.

They are capable of swimming against strong currents, shifting large stones while building their nests, and when danger threatens they are able to leap around three metres in a single jump.

11. Their unusual breeding behaviour may explain their gigantism

Female goliath frogs judge the fitness of a potential mate by the quality and size of his nest, and males also fiercely guard their nests from competitors who might want to take credit for their hard work.

It is thought that these factors have played an important role in the impressive size of goliath frogs, creating selective pressure for them to grow ever larger.

12. Goliath frogs are all bite and no bark

The vast majority of frog species around the world advertise their fitness to potential mates using sound, and different species have developed an astounding range of unique calls to advertise their presence to conspecifics.

Strangely, goliath frogs don’t have a vocal sac, and are completely mute as a result.

13. They suffer from parasites

One particular parasite that can be caught from standing water is called microfilaria. It can be found within the blood and lymphatic system of goliath frogs and sadly cause lethargy and mortality.

They can also suffer from worm-like parasites which target the gastro-intestinal tract.

14. They are under threat from an insidious disease

Many amphibian species around the world are currently under dire threat of extinction from a fungal skin disease called chytridiomycosis.

Thought to have spread via international trade routes, it is threatening a shocking number of amphibians around the world with extinction, and without intensive conservation efforts it is likely that many species will be lost within the next few decades because of it.

15. Their ridiculously specific habitat requirements make them particularly vulnerable to other threats

Goliath frogs have been hunted for food by local people for hundreds of years.

However, with the increasing pressure from chytridiomycosis and the rapid loss of their already restricted habitat, hunting is quickly becoming the dominant threat to the survival of the species.