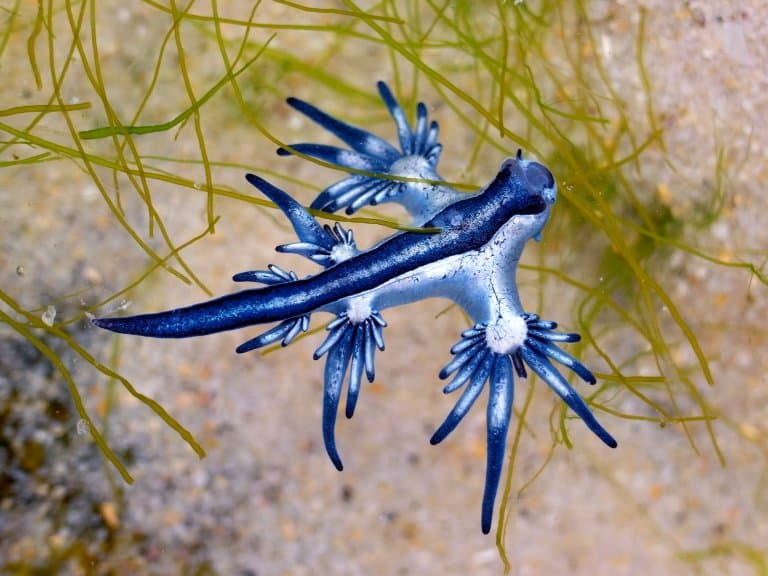 Blue sea dragons are stunning little molluscs that hang out upside-down in many of the world’s open oceans. These are shell-less gastropods, like your common garden slug, but with a lot more going on.

They spend their life floating around, partially kept afloat by a gas filled sac in their stomach to aid buoyancy.  Blue dragons are also known as the blue sea slug, blue angel, dragon slug, and even sea swallow.

They’re vivid blue, which may help protect these water surface-dwellers from UV light and provide important camouflage. They also sport six feathered appendages from their body, and hunt down some of the more venomous animals in the ocean for lunch.

They grow up to around 3cm (1.2 inches) in length, although some larger specimens have been discovered and can be found in groups.

They are one of the few carnivorous slugs, and their weirdness doesn’t stop there; they can also give a nasty sting if handled or stepped on.

1. They live inversely to most animals

Of course, there are valid reasons to adjust this setup temporarily, and we don’t need to go into those here. The point is, up is up, down is down, and that’s the way we like it.

Most ocean animals are like this, too, and as such, many make use of a cool adaptation called countershading. This is where their top side is dark and their bottom side is light. This is a form of camouflage, in that when you’re looking up at one of these animals, you see a colour similar to that of the sky above, and if you’re looking down, it’s less contrasted against the deep blue sea.

Blue sea dragons, on the other hand, have it all backwards.

Their top side is lighter than their foot, which is blue. That’s because their floor is the sea surface, and they rest on it from underneath! Like other slugs, they suction onto their substrate to get around, only in this case maybe you could call it a superstrate. The surface tension carries them from location to location through wind and ocean currents. 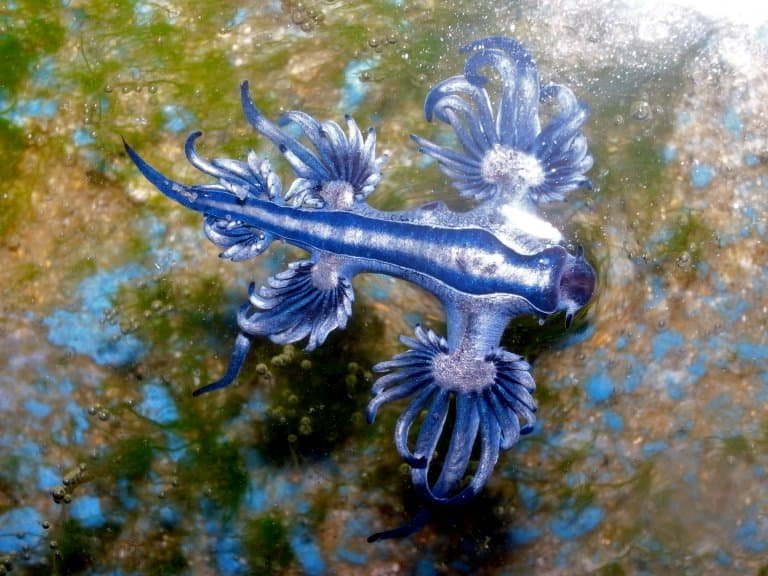 All right, we may have been exaggerating a little in both the ‘deadly’ and the ‘jellyfish’ part of that sentence, but a Portuguese Man o’ War is nothing to be trifled with. Still, these little dragons make short work of them and will choose them over lettuce any day of the week.

But that’s not its only food; this animal has a taste for danger. A similarly jellyfish-like hydrozoan called the By-the-Wind Sailor is also on top of its menu, as well as the floaty violet sea snail and yet another stinging colony animal, the blue button.

Like terrestrial slugs, they have radular teeth. These are the same rasping, scraping teeth that are used to scratch at the flesh of your delicate vegetable on land, and in blue sea slugs, the bodies of their victims. 1

This dragon can’t breathe fire exactly, but it can cast spells.

In the tips of its extremities lies a defensive venom that it gathers from the toxins it acquires through its stinging prey.

This slug isn’t venomous by itself, it swallows and stores the stinging nematocysts from Portuguese man o’ war and then uses them itself. 2

4. They have long genitals

When you’re trying to mate with something that has stinging fingers everywhere, this is a good strategy. The mating ritual of these slugs, like many slugs, is as elegant as it is creepy.

These slugs are hermaphrodites, and the dance they make during mating involves a delicate embrace, followed by a coiling of each other’s penises, after which each slug is inseminated.

Unlike in their cousins, the banana slugs, both parties leave with their genitals intact. When they come to lay their eggs, they attach the stinging tentacles of their uneaten prey to the egg strings.

Blue dragons like to float together as close as possible to their prey and being carried by currents and winds, creating groups known as ‘blue fleets’.

This can be useful for both breeding, and eating! 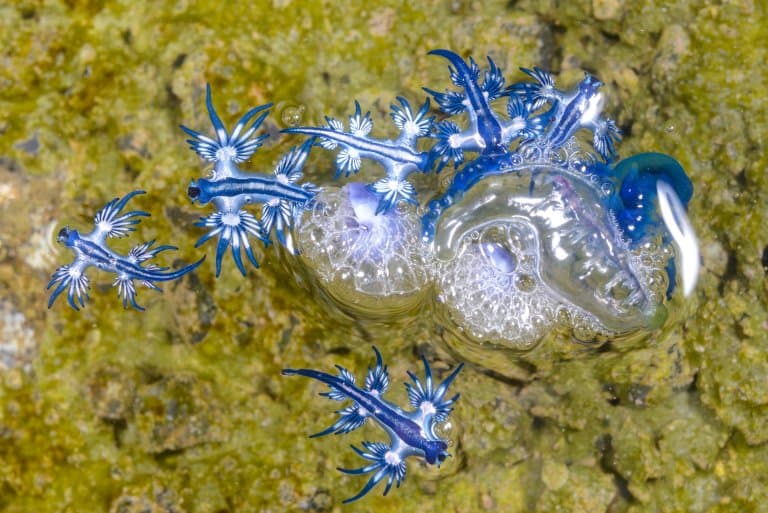 Being at the mercy of the ocean and wind currents has its drawbacks. On occasion, large numbers of these tiny dragons wash up on beaches. This is a problem for beachgoers, on account of the stings, but it’s much more of a problem for the dragons, who can only breathe underwater.

These strandings coincide with those of its favourite food, so if you’re ever in a place where you might see lots of Man o’ War washed up on the beach, that’s a good time to look for blue sea dragons, too.
3

7. Their venom is active even after death

Picking up a blue sea dragon can result in a painful sting.

Even after death, their venom remains and stepping on one, or picking one up can result in a fiery sting that can result in symptoms such as nausea, pain, vomiting and more.

8. They’re part of a species complex

This is more of a complex for the taxonomists than for the slugs themselves, who seem perfectly happy with who they are and whom they mate with.

Researchers, on the other hand, have a hard time telling species in the Glaucus genus. It doesn’t help that the hero of this story, G. atlanticus is also found in the Pacific and other oceans, with distinct genetic differences between populations.

In fact, in the 1800s there were at least five other species names that would ultimately be reassigned to G. atlanticus. 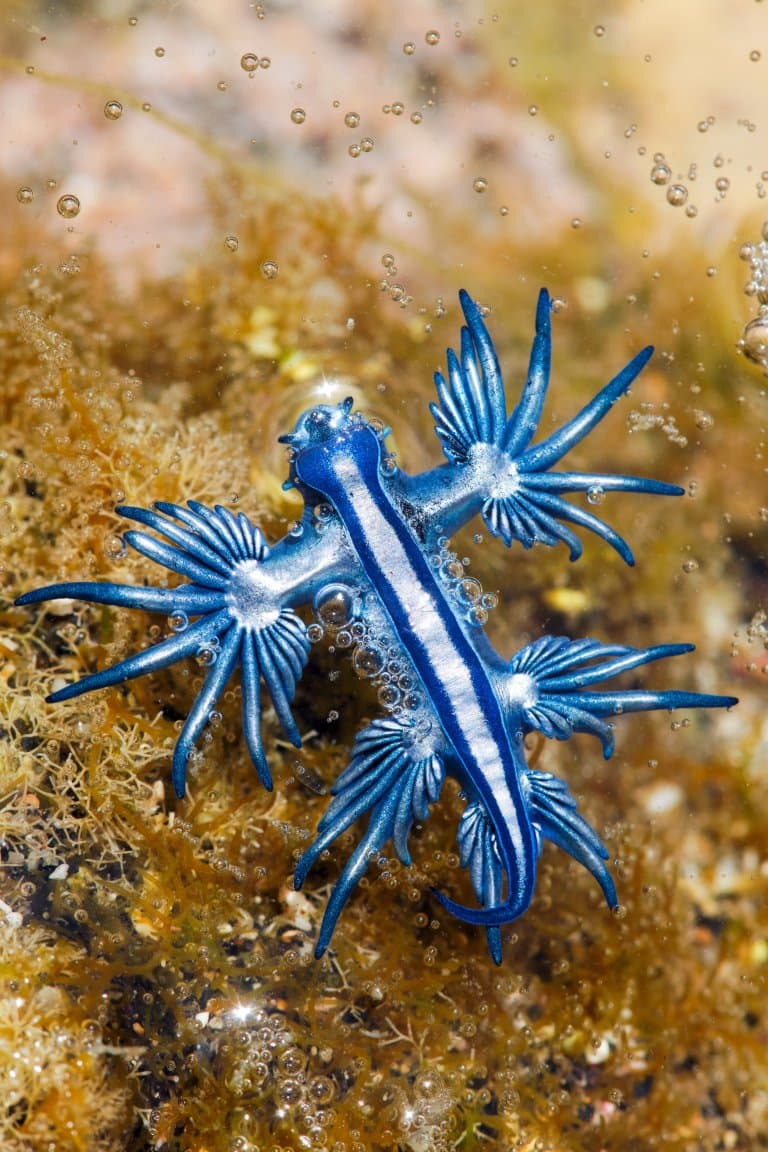 9. They’re showing up in areas they aren’t supposed to

Researchers are finding these little animals in new locations as of late. Both Taiwan and Texas are some of the locations in which blue sea dragons seem to be appearing more often than usual.

You may think this is a good thing, and a sign that the species is doing well – and they may well be – but population blooms in new locations often spell turmoil for the ecosystem.

Climate change likely plays a role in the dispersal of these animals, and as such, they could be a bad omen for further ecosystem troubles down the line. Unfortunately, we know so little about them that it’s impossible to be sure, perhaps until it’s too late.