Glass frogs, or to use their scientific name – centrolenidae, are tiny and quite magical little creatures that inhabit warm and humid montane forests in Central and South America.

The nickname ‘glass frog’ is born from these amphibians’ translucent appearance, which aids them hiding from predators when asleep in trees. 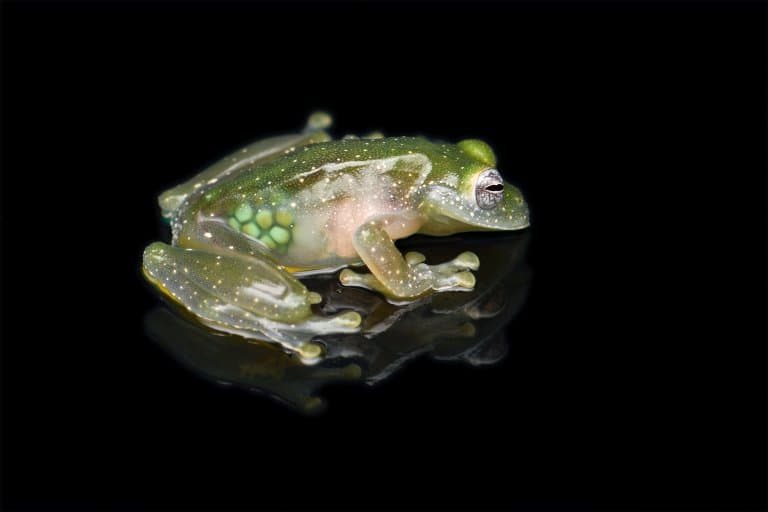 There are around 160 species of glass frog in 12 genera. These tiny and elusive creatures range from 20-30mm in length, although a few species can reach lengths of up to 80mm.

Glass frogs are nocturnal, riparian (living along streams) and arboreal, meaning that they sleep during the day, hiding in the leaves high up in the trees lining streams and waterways.

To protect themselves from predators during this vulnerable time, glass frogs have translucent undersides which blur the edges of their bodies when they sleep clinging to the undersides of leaves.

This remarkable feature means that from above, the frog has a very indistinct silhouette and all that can be clearly seen are the small blobs of the creature’s heart and intestinal organs, which are not immediately eye-catching to potential predators. Through the abdomen of a glass frog, therefore, one can clearly see its internal organs, and its tiny heart beating. It is also possible to see all of a female’s eggs before she lays them.

Glass frogs are a pale green color elsewhere on their bodies and on their backs, often speckled with pale white or yellow spots which also acts as a form of camouflage. They generally have short snouts, golden irises and yellow suction pads on their fingers and toes.

Living on a diet of small invertebrates, flies and spiders, glass frogs use their long digits for climbing high into the trees during dry season, to escape predators on the forest floor such as lizards, snakes and small mammals. During the wet season the males move close to streams of rivers for mating.

Glass frogs have the ability to jump forward and laterally from a sprawled position using their powerful lateral bender legs. Rather than a croak, male glass frogs emit a high-pitched whistling call which can increase in volume with age or maturity.

1. Glass frogs have the ability to make themselves 60 percent more transparent while they sleep

In a fascinating study, scientists watched with awe as glass frogs were observed to drain almost all their red blood cells into sacs within their liver when they slumber.

These sacs are coated with light-reflecting crystals, which can enable the frog to be almost completely invisible. As red blood cells absorb a lot of light and are so brightly coloured, the incredible ability of glass frogs to hide them within their own liver has been a source of amazement for scientists.

To accommodate this increase in blood, the liver can enlarge by up to 40 percent. When the frog awakes, the blood is redispersed and the liver decreases in size.

It is very rare to see translucent creatures on land, although it is slightly more common in sea creatures, such as krill. Vertebrates’ skeletons and organs are full of opaque substances that light can’t penetrate, and much of this is vital for life.

The glass frog’s ability to become so translucent is therefore quite amazing, and helps these tiny creatures to avoid predation during their vulnerable periods of daytime slumber. 1 2 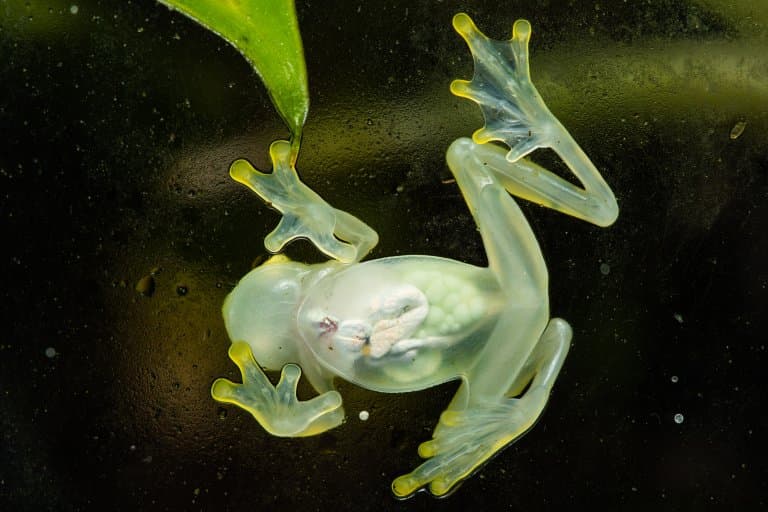 2. Glass frogs mate on leaves, not in the water

When a male glass frog is ready to mate, he will find a suitable large leaf overhanging a stream, river or lake edge. From there, he will begin his mating calls until a female joins him on his leaf. They mate on the leaf, with the male resting on the female’s back and wrapping his arms around her waist.

The female will deposit a clutch of 18-20 eggs onto the underside of the leaf, securing them with a sticky jelly-like substance.

Once the eggs hatch into tadpoles, they fall from the leaf into the water below and remain to feed and grow amongst the leafy detritus at the water’s edge until they metamorphose into froglets. In optimal conditions, glass frogs can live for more than 10 years, even up to 14. 3

3. The male glass frog takes on the role of protector for their spawn

Once the eggs have been laid by the female after mating, the female frog will depart, leaving the male frog to act as protector for their clutch of eggs. The male will remain on the leaf watching over the eggs until they hatch into tadpoles and fall into the water below.

Sometimes the male will copulate with several different females and keep watch over several clutches of eggs in different stages of development.

The frogs are fierce protectors and will keep a constant watch over their eggs until they hatch. Males have been known to kick out at potential predators, such as wasps in order to keep them away from their precious eggs.

4. Male glass frogs can get territorial over their leafy hangouts

Mostly inhabiting leafy vegetation along streams, the male glass frogs can create loud squeaking sounds in order to warn other male frogs to keep away from their chosen spot.

If necessary, the frog may resort to a wrestling match to remove unwanted intruders from his leaf.

5. The spotted patterns on the frogs’ backs can resemble a clutch of eggs

This helps the male frog to protect his spawn by confusing potential predators. 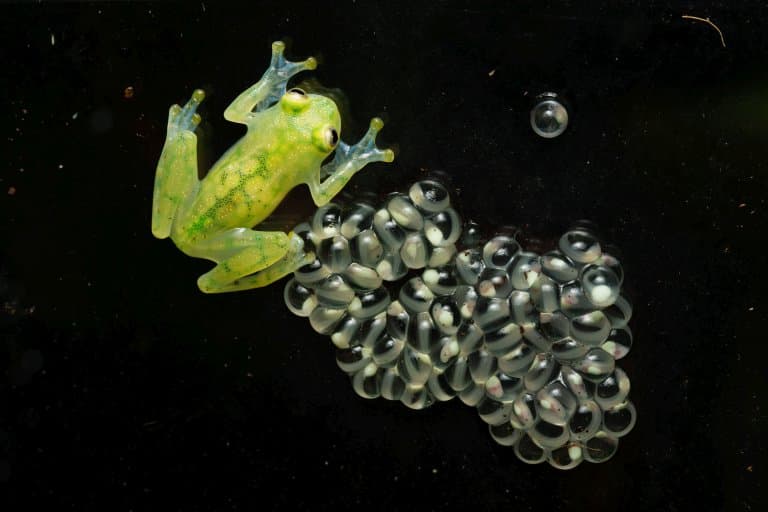 6. ‘Frog flies’ are a major threat to unhatched spawn

Frog flies will lay their eggs on the top of the glass frog eggs. The fly eggs hatch very quickly into maggots, which then feed on the vulnerable frog embryos.

Their long digits help them to be efficient climbers, and enable them to be tree-dwelling. 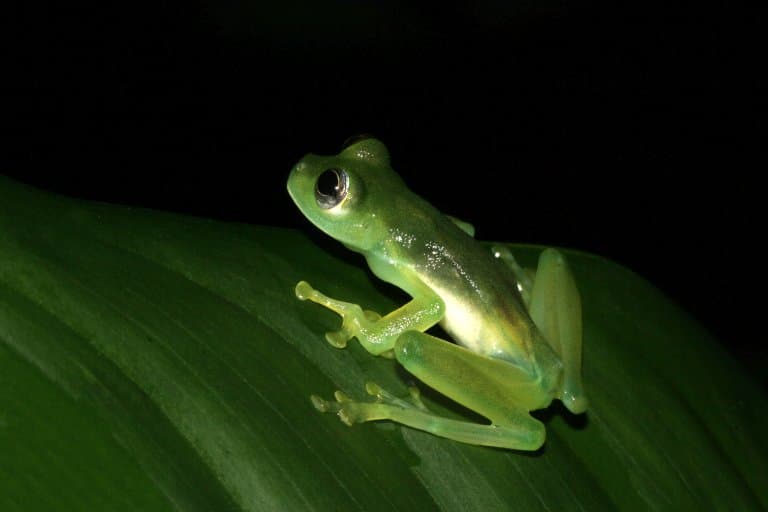 They have been known to travel distances of more than 3 metres (10 feet) in one jump if necessary. 4

This can aid them in evading predators such as the eyelash viper, which use infrared light to seek their prey.

The glass frogs’ ability to reflect this infrared light offers them excellent protection from detection.

This is quite a unique feature as, generally speaking, prey will have side-facing eyes, while predator’s eyes are forward facing. 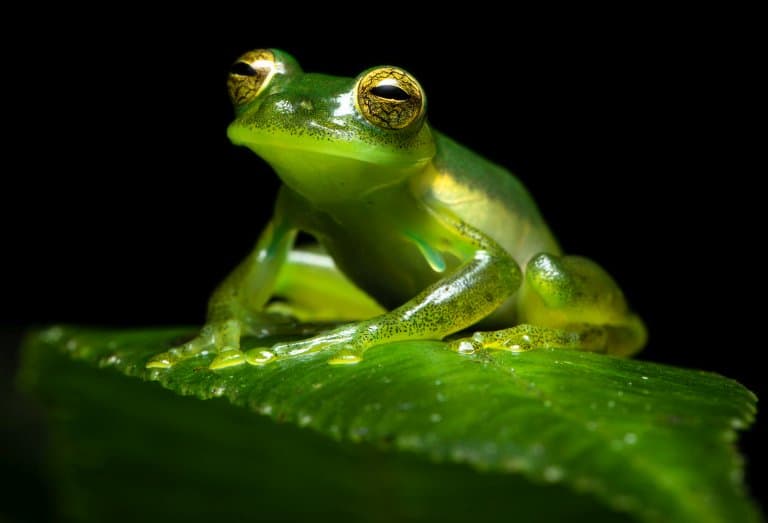 11. They have short tongues

In contrast to many other amphibians, glass frogs have relatively short tongues, which means the catching of their prey requires more care and patience then for some.

They wait patiently until their prey comes close enough before pouncing on it with an open mouth to snatch it up.

12. They could assist with major advances in medicine

For decades, scientists and medical researchers in hematology have been searching for a biological mechanism to control excessive bleeding while still preventing excessive clotting, and the glass frog’s fantastic ability to control their red blood cells could offer what has been called the ‘Holy Grail of hematology’.

The fact that glass frogs seem to be able to cram their red blood cells together in a small space with no ill-effects could help scientists to gain a deeper understanding of the way these blood cells work and possibly help to prevent dangerous blood clots in other animals and even humans. 5 6 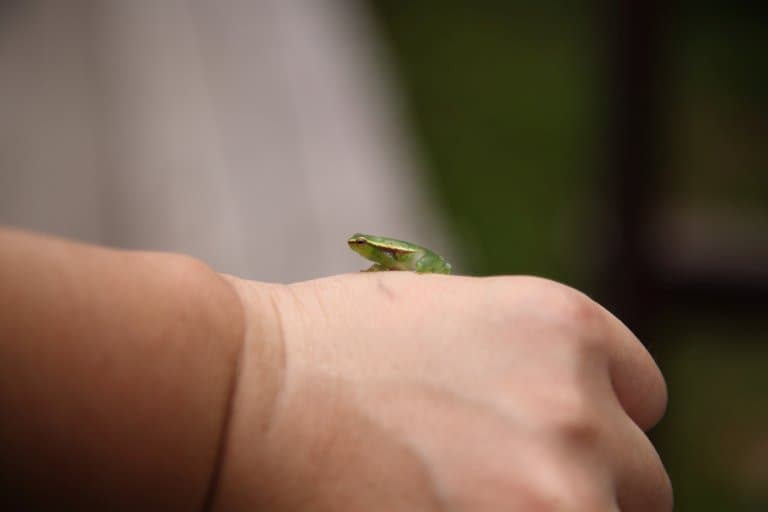