This frightening sounding creature is not only the largest lizard native to the USA, but its bite packs a venomous punch, that’s more than worthy of a monstrous reputation.

Yet while its name and reputation strike fear in the minds of people around the world, the gila monster (pronounced HEE-luh) possesses a placid nature and much prefers an easy meal over chasing down its prey.

Weighing in at over 2 kilograms and with a length of over half a metre, the Gila Monster is the largest lizard native to the United States.

Gila Monsters are rarely seen due to their nocturnal lifestyle but are easy to identify if you are lucky enough to spot one. They have striking patterns of either orange, yellow or pink scattered throughout their jet-black bodies and possess a plump tail which they use to store fat and water.

They are well known for their venomous bite, which is mainly used as a defence against predators. It is a neurotoxin (a poison that acts on the nervous system) that moves through small grooves in their teeth and into the victims open wound.

Gila Monsters are nest predators; this means that they mostly feed on the contents of other animals’ nests and do not actively hunt live prey.

They are sluggish, so mainly eat helpless creatures, like young rabbits, rodents, or birds as well as eggs from nests. Because most animals tend to nest just once a year in the spring, the Gila Monster has adapted a slow metabolism to help them survive for long periods of time without consuming any food.

Even with their powerful defence against predation, there are still a few factors that even a Gila Monster can’t protect itself from. The main threats facing Gilas are human activities and climate change, both of which are causing a decline in numbers and earning themselves a ‘near threatened’ status on the IUCN red list of threatened species.

1. The Gila Monster is one of only two poisonous lizards found in the world

The Gila Monster and its close cousin, the Mexican Beaded Lizard (Heloderma horridum) not only belong to the same family (Helodermatidae) but are the only lizards in the world known to have evolved their own venom delivery system. 1 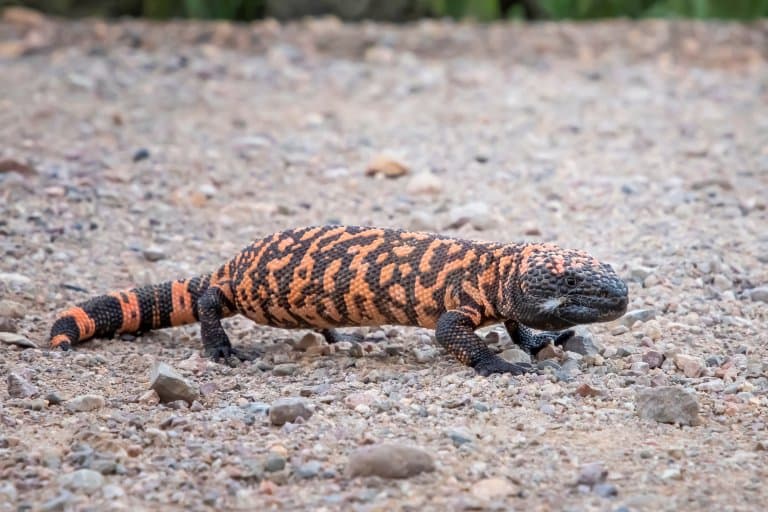 2. A Gila Monster bite can cause a near death experience

While there haven’t been any recorded cases of death by Gila Monster, side effects of their bites include swelling under the skin; breathing difficulties; diarrhoea; vomiting; excessive sweating and reduced blood flow to the heart. 2

3. There isn’t an antivenom for a Gila Monster bite

Even with such a horrific list of painful side effects, the creation of an antivenom has been deemed unnecessary by most healthcare professionals since there are no recorded human deaths and cases of people getting bitten are relatively rare.

4. It was named after the Gila River Basin

The Gila Monster was first discovered in Arizona’s Gila River Basin in the late 1800s by a palaeontologist named Edward Drinker.

5. Its skin is covered in armour

These small, bony deposits that cover the lizard from head to tail are called osteoderms, and they act as a light armour to protect the Gila Monster from whatever life throws at it. 3 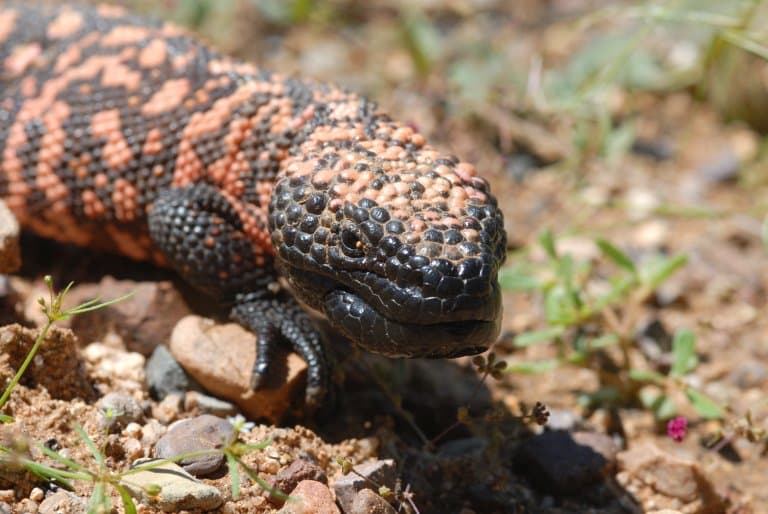 6. Gila Monsters can store an impressive amount of energy compared to other lizards

Due to their large size and fatty tails, Gila Monsters can store a lot of energy in their bodies, which they can access during long periods without food and water.

7. They have an extremely low metabolic rate

This adaptation allows the Gila Monster to search for food less frequently, as they don’t use up as much energy as other reptiles of their size.

Some herpetologists (someone who studies reptiles and amphibians) have suggested that an adult Gila Monster can eat a year’s worth of calories in just three or four sittings!

8. They could help in the fight against diabetes

Scientists have managed to extract a protein in the Gila Monster’s poisonous venom that aids in the production of insulin, which is a hormone in the human body that controls the amount of glucose (a form of sugar) in the bloodstream. 4

Instead of injecting venom through fangs like snakes do, Gila Monsters chew the neurotoxin into their victims through the enlarged, grooved teeth in their lower jaw. 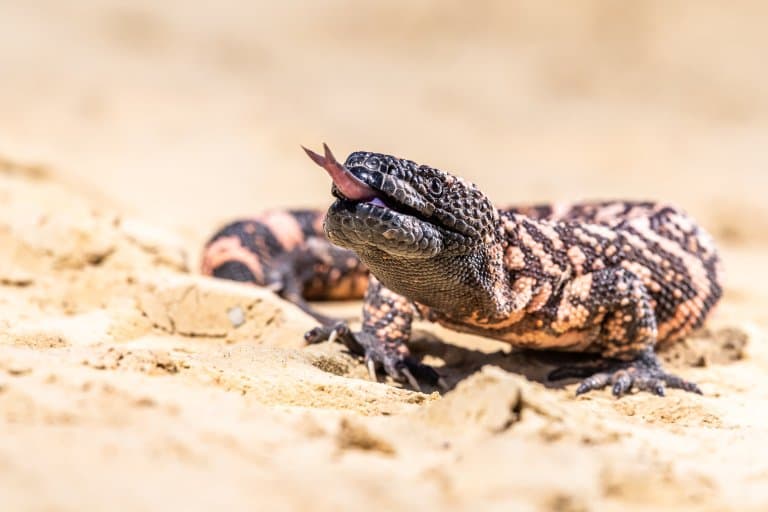 Some scientists used to believe that Gila Monsters shouldn’t be able to survive in their dry desert habitat, but studies have found that the secret to the Gila Monster’s survival is that it uses its bladder as a water storage tank!

11. They are surprisingly ill-adapted to their environment

The Gila Monster relies on humidity to retain enough water in its body to survive, since they don’t take on much water through their food. These are not particularly helpful traits when you spend much of your summer in a desert.

Thankfully, the summer monsoon season is reliable and predictable, and Gila Monsters have been known to last up to 81 days on a full bladder of water. 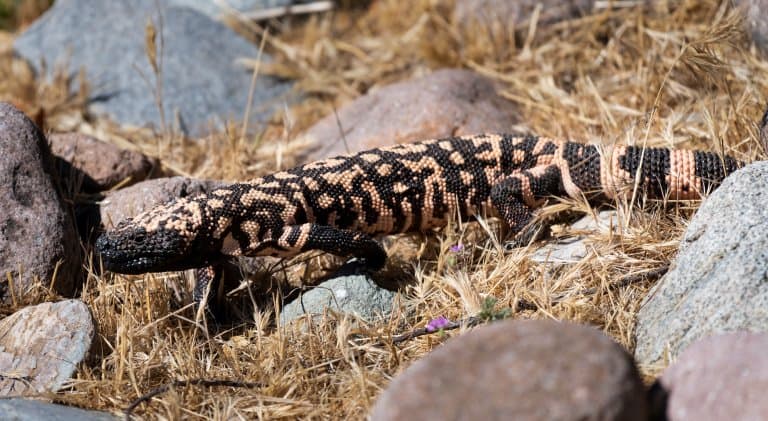 They spend most of their days under rocks and boulders, only coming out in the early morning sun to bask before retreating back into their den to avoid predators and the unforgiving summer heat.

13. They are not restricted to the ground

While they are sluggish and not super agile, Gila Monsters can still climb trees and cacti in the search for food, such as finding eggs in nests.

14. It’s illegal to kill a Gila Monster in the United States

Due to their conservation status, declining numbers, and predictions that there are only a few thousand Gila Monsters left roaming in the wild, killing a Gila monster has been made illegal in the United States.

15. They have an excellent sense of smell

By flicking its tongue in and out of its mouth, the Gila Monster collects scent particles in the air and delivers them to the Jacobson’s organ (a scent detecting organ present in many other reptiles).

This helps the Gila Monster to detect and dig up nests up to 15cm under the ground, and they have even been known to detect a scent trail left by eggs that have rolled away from their nests!

Between April and June each year males will wrestle over female mates.

They will fight, by climbing on each other and performing barrel-roles while biting, similar to how a crocodile will bite and spin to sheer off meat.

However, while they have sharp teeth, they usually come out unscathed due to their incredible armour. The dominant lizard wins by pinning the other to the ground, before it’s set free.

17. Gila Monsters should brush their teeth once in a while

The Gila Monster’s breath is believed to be so bad that an early study of the lizard suggested that it could use its breath to help capture food. The article from 1906 reads: 5

“The breath is very fetid, and its odor can be detected at some little distance from the lizard. It is supposed that this is one way in which the monster catches the insects and small animals which form a part of its food supply – the foul gas overcoming them”.

18. The Gila Monster is a movie star… sort of

But any keen Zoologist would quickly notice that it isn’t the Gila Monster that is the star of the show, but its apparently attention-starved cousin, the Mexican Beaded Lizard.

Human activity such as urbanisation, agricultural development and building busy highways are quickly shrinking the Gila Monster’s geographical range and forcing it out of its preferred habitat.

With less places to hide and with global warming affecting the weather patterns that the Gila Monster relies on, the future is looking uncertain for this not-so-scary little monster. 6