It’s well known that adapting to the deep ocean makes animals weird, and Chimaera, widely known as ghost sharks are no exception. For one thing, they are not actually sharks!

They do belong to the same taxonomic class, but their most recent shared ancestor is thought to have existed in the mind-bogglingly ancient Devonian period- around 200 million years before the evolution of flowering plants!

Chimaeras are commely referred to as ghost sharks, but they are also sometimes called spookfish, rat fish, rabbit fish and even elephant fish due to their rather odd-looking appearances throughout their different species.

‘Chimaera’ is a common name given for cartilaginous fish belonging to the subclass Holocephali of the class Chondrichthyes, which includes the sharks, skates and rays – who are ghost sharks closest living relatives today.

Once a highly diverse subclass, extant species within Holocephali now only exist within a single order, Chimaeriformes, which itself is separated into three families: Callorhinchidae (plough-nosed chimaeras), Rhinochimaeridae (long-nosed chimaeras) and Chimaeridae (short-nosed chimaeras, the type family of the order). There are currently around 50 extant chimaeras, accounting for around 4% of chondrichthyan species, but more are still occasionally being discovered.

Ghost sharks are specialist deep water dwellers spending most of their time between 400 – 2,000 meters, gliding slowly over the seabed in search of invertebrate prey.

They like to diet on crabs, shellfish and sea urchins.

They resemble sharks in some ways including internal fertilization of females and electroreception to find prey. However, they also differ with retractable sexual appendages on the forehead, gill covers akin to bony fish, and they are without a sharks razor sharp rows of replaceable teeth.

Most chimaeras as listed as ‘least concern’ by the IUCN, however, Silver chimaera and Rabbitfish are listed as Vulnerable and in general they are all largely understudied.

1. They are the among the oldest fish in the ocean

They have the slowest evolving genome of all known invertebrates. That’s why many of their characteristics seem out of place against other oceanic species.

In fact, ghost sharks belong to the only group of fish with true nostrils! 1 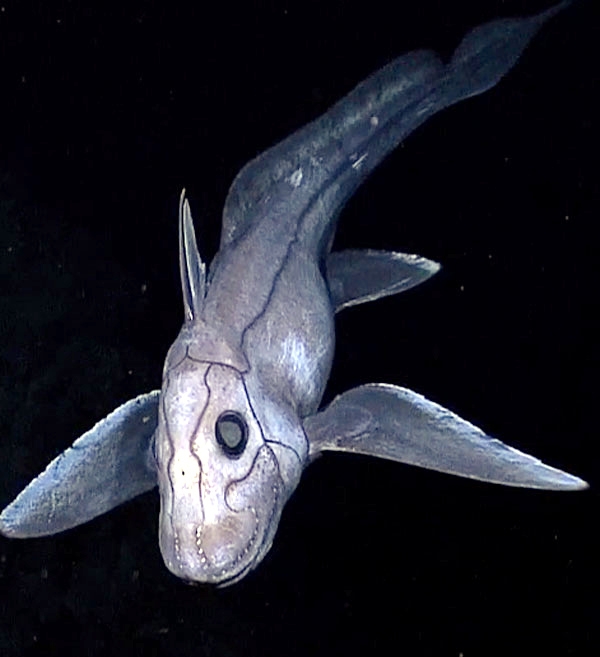 2. Some ghost fish are known as ‘rat fish’ and ‘elephant fish’ 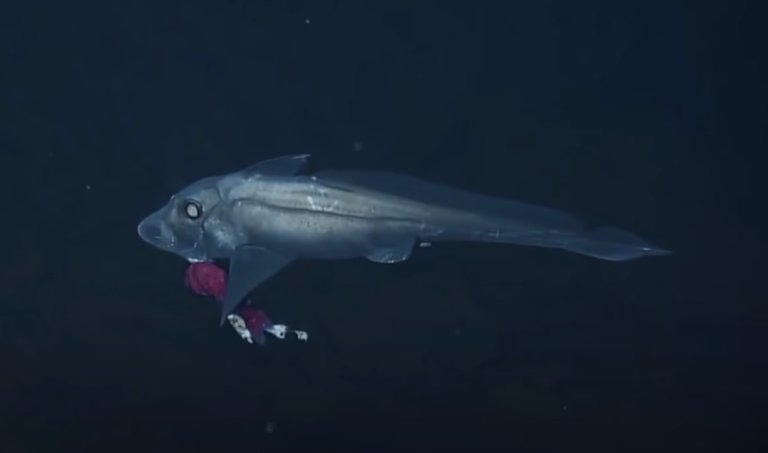 While elephant fish has a snout that looks like a bit like a trunk (if you squint). 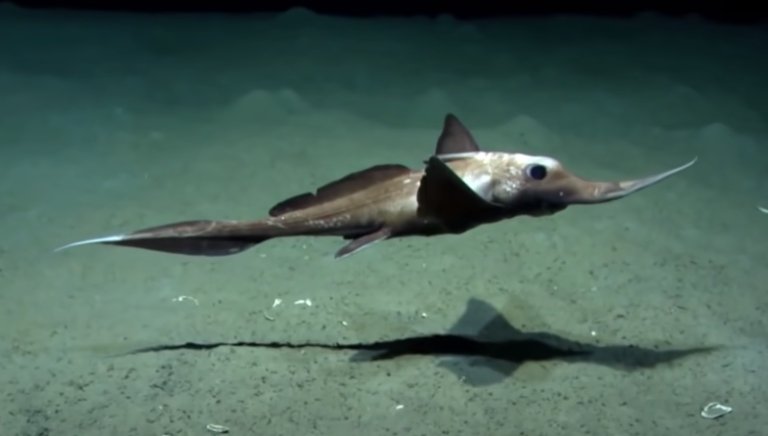 Chimaeras are equipped with specialised teeth to suit their diet of benthic invertebrates.

Instead of pointed cutting teeth like those found in sharks, chimaeras have three pairs of continually growing tooth plates on the roof of the mouth and lower jaw that allow them to chow down on tough shells and carapaces with ease. 2

4. Their teeth have a unique mineral composition

Chimaera teeth are made up of a hyper-mineralised tissue called pleromin that, uniquely among vertebrates, contains the mineral whitlocke.

It is thought that this unique mineralisation contributes to the extraordinary hardness of their grinding tooth plates.

5. They have no scales

Unlike other chondrichthyans, whose bodies are covered in tiny, drag-reducing tooth-like scales, chimaeras entirely lack scales over the majority of their bodies.

Only males have any scales to speak of, and only on their reproductive organs.

6. Their eyes are backed with a reflective tissue layer

This makes them seem to glow in the dark and adds to their ghost-like appearance, but their reflective tissue and large eyes helps them absorb more light in the very dark deep sea. 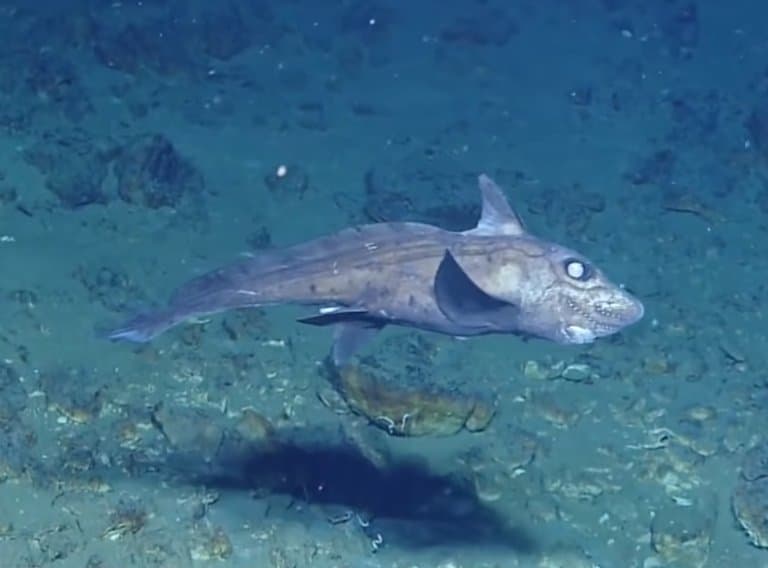 7. Ghost sharks have an unusual method of propulsion

Chimaeras have enlarged pectoral fins that they ‘flap’ to propel themselves through the water.

Their tails mainly function as rudders, but they can be used to produce a burst of speed when the chimaera needs to escape predators.

8. They have a venomous defensive weapon

Positioned just in front of the dorsal fin of most chimaeras is a vicious spine with a groove running down its centre and a venom gland seated at its base.

These spines are designed to pierce the mouths of hungry predators, and are reported to cause excruciating pain by unfortunate humans who have had a close encounter on the business end. 3

9. They have no stomachs

Chimaeras have a simplified digestive system which does not include a well defined stomach.

Their oesophagus connects to a unique digestive tube that is not separated into a discreet stomach and intestine, and this tube has an unusual helicoidal internal structure that directs ingested food in a spiral to maximise surface contact as it is digested. 4

10. Their evolutionary origins are mysterious

Chimaera fossils are very rare, and this makes puzzling out their phylogeny very difficult.

There’s a rather large timeline to fill in, too- they are thought to have diverged from other chondrichthyans around 400 million years ago! 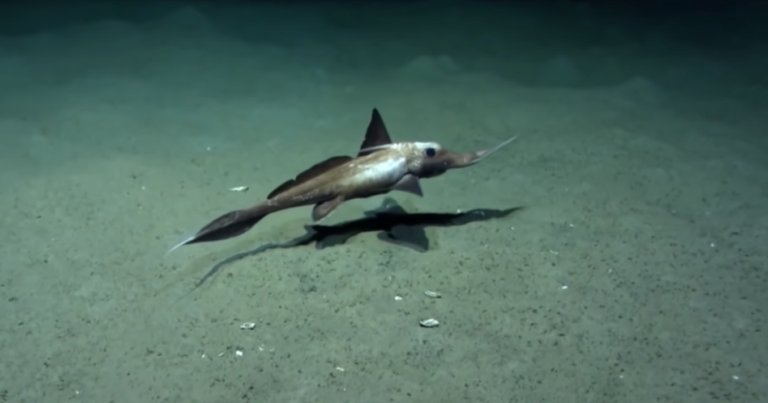 11. Vision plays a large part in their survival

Despite living in near total darkness for most or all of their lives, chimaeras have highly sensitive eyes that are heavily specialised towards picking up movement.

Achieving this in such dark environments has required a trade off; chimaeras have a low visual resolution and lack colour vision. 5

Like other chondrichthyans, chimaeras possess specialised sense organs called electroreceptors which allow them to sense the tiny electric currents produced by the muscles of other organisms.

These electroreceptors are seated in tiny pores which are clustered around the underside of the head, and they allow the chimaera to accurately aim its jaws at its prey. 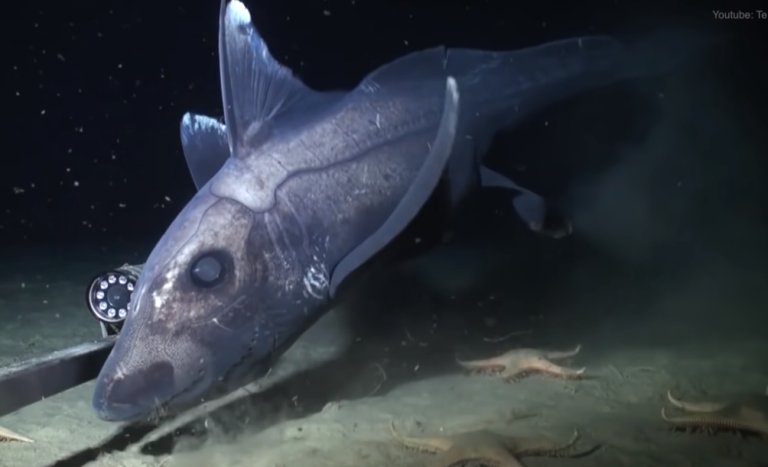 13. Trawling is the main threat faced by ghost sharks

Chimaeras are commonly brought up in deep ocean trawl nets as bycatch.

Some vessels keep them for their liver oil, which is used in some cosmetics, but even chimaeras which are thrown back rarely survive the rapid changes in pressure from the ordeal.

14. Their reproductive strategy puts them at risk from humans

Chimaeras have a “k-selected” reproductive strategy, meaning that they invest heavily in producing small numbers of well developed young rather than millions of tiny, larval offspring.

This results in higher individual survival of young chimaeras in their challenging deep-sea environment, but it renders their populations vulnerable since they cannot recover quickly from rapid reduction in their numbers.