Fried egg jellyfish are free-swimming ocean animals with bright yellow domes and trailing tentacles. Also known as the egg-yolk jellyfish, they come from the Phylum cnidaria, which encompasses over 11,000 animals that have bodies made from a jelly-like substance and have a single orifice and body cavity.

Fried egg jellyfish can be found throughout the open ocean, at depths of up to 165 feet.  Some prefer the warm waters of the Atlantic Ocean and the Mediterranean Sea, while others are typically found over deep basins in the Pacific Ocean. 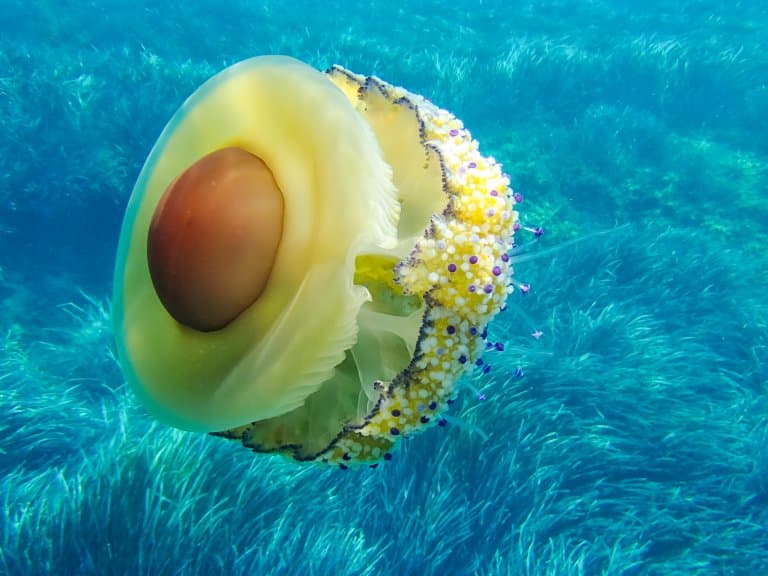 There are two different species of jellyfish that are often referred to as a fried egg jellyfish, from different families – Phacellophora camtschatica and Cotylorhiza tuberculata.

Fried egg jellyfish are easily spotted by their smooth, yellow dome that is surrounded by a white or transparent cilia. Like all jellyfish, they have trailing tentacles that can range from short to nearly 20 ft long.

The body of a jellyfish is made up of two cell layers: the external epidermis and the internal gastrodermis. Between these layers is the mesoglea. This is the jellylike material that makes up most of their bodies and creates a sort of internal skeleton.

These invertebrates drift through the ocean catching prey in their tentacles. Their tentacles are adapted to sting prey and potential predators such as turtles and sea birds.

Throughout their lifecycle, jellyfish transition between two body forms: medusa and polyps.

The polyp form looks somewhat like a jellyfish turned upside down. This is the stage of the lifecycle that comes after the egg and before adulthood. After an egg is fertilized, it develops into a planula (a free-swimming larva).

After a few days, it will attach itself to a firm surface and transform into a polyp. The form that we are all familiar with and typically associate with jellyfish is the medusa. This is a jellyfish in its adult stage.

Though they have the word “fish” in their name, jellyfish aren’t really fish at all. In fact, they couldn’t be more different. Jellyfish don’t have fins, gills, or scales.

They come from a completely different phylum. Really, the only thing they have in common is that they both live in marine habitats. 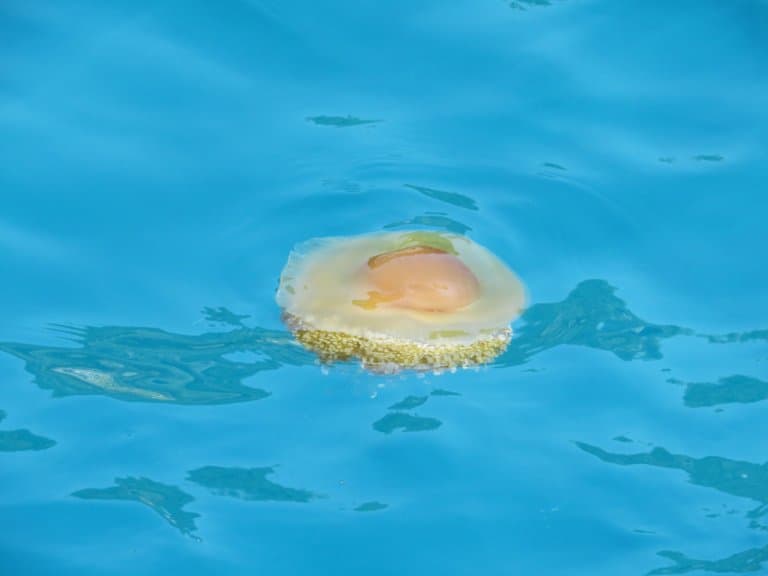 They also lack a heart, stomach, and many of the other organs we are familiar with.

While they do have a nervous system, jellyfish don’t possess a brain in the way that we typically think of them.

Instead, they have a network of neurons that allows them to sense different aspects of their environment, like changes in water chemistry or which direction they are facing. 1

The jellylike material that makes up most of what we consider a jellyfish is called mesoglea.

This material is mainly made up of water, with the exception of a few structural proteins. The other 5% of jellyfish is their muscle and nerve cells. 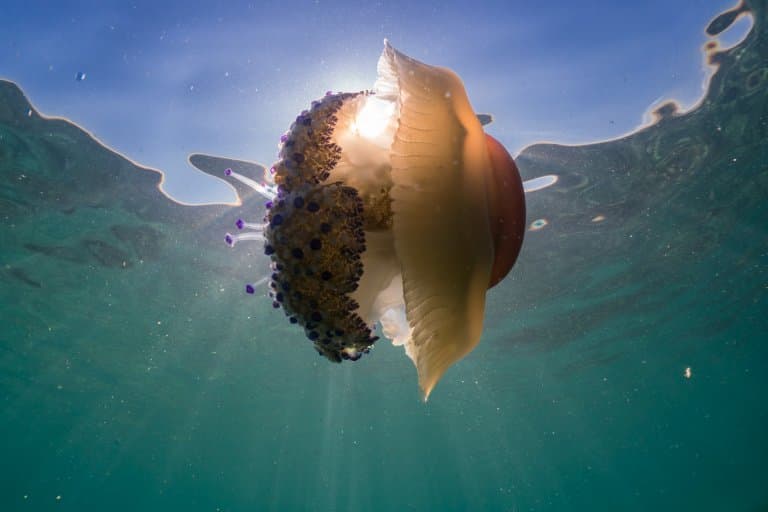 4.    Jellyfish are the oldest animals on Earth

Fossils dating back to the Cambrian period suggest that jellyfish are at least 500 million years old. This makes them about three times as old as dinosaurs, if not more. 2

Phacellophora camtschatica and Cotylorhiza tuberculate are both referred to as fried egg jellyfish. This name comes from the bright yellow dome surrounded by a white or transparent membrane around the edges, making it look like a fried egg floating in the water. However, there are some major differences between these two jellies.

Phacellophora camtschaticas are large jellyfish that can be found in oceans worldwide. The bell can grow to a diameter of about 2 feet long. They have 16 clusters of tentacles that can stretch as long as 20 feet. They typically sit motionless in the ocean, acting as an underwater spider web to capture their prey.

Cotylorhiza tuberculates have short appendages that are a deep purple color. These are much smaller than the other species and are most commonly found in the Mediterranean Sea. This jellyfish is also more apt to move through the ocean by slowly pulsing its bell.

6.    They seem to be adapting well to climate change

Unlike most creatures, jellyfish don’t seem to be having a hard time with climate change. In fact, they may even be thriving in it.

According to experts, jellyfish populations are expected to rise. This is because they can survive on less oxygen than most marine creatures, even plankton. As oxygen levels lower in ocean waters, jellyfish are expected to outlive most of the species. 3

7.    They catch prey in their tentacles

Their tentacles are adapted to sting prey and potential predators such as fish, turtles and sea birds. 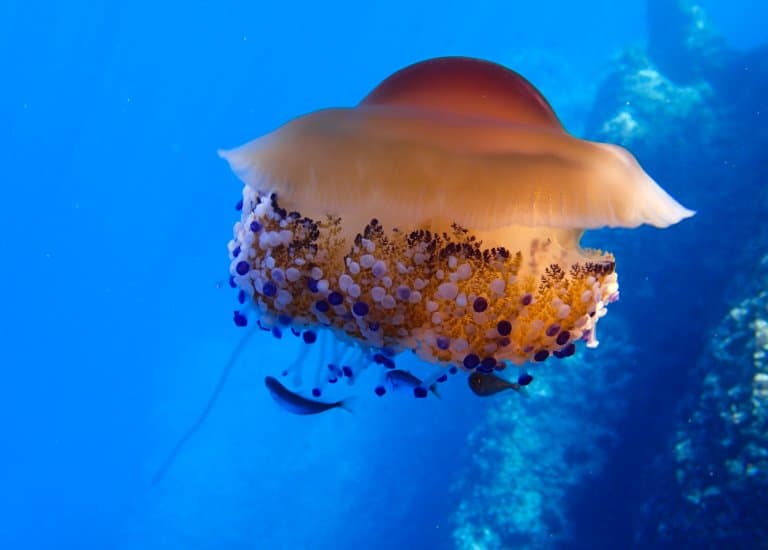 You can see the fried egg jellyfish (Cotylorhiza tuberculata) swimming with small fish caught in its tentacles.

Though we often see pictures of a large group of jellies floating through the ocean, these creatures are fairly solitary animals. They typically only get clumped together when they are following the same water current or food source.

However, when they are found in a group, they tend to go by some fun names, including smack, swarm, and bloom. 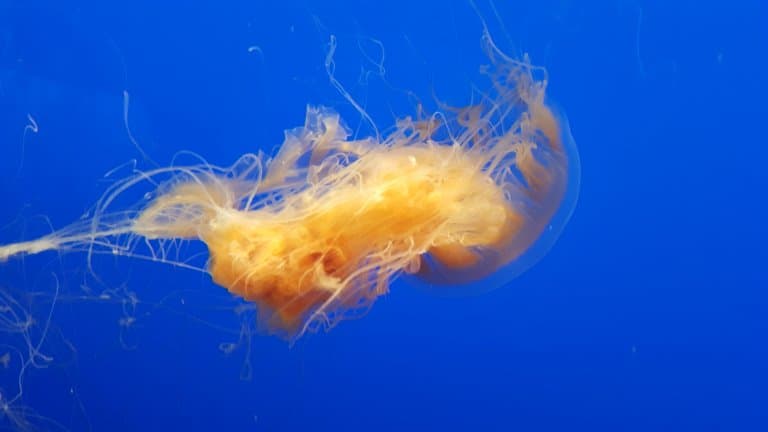 A single jellyfish will reproduce both sexually and asexually in its lifetime.

During the medusa form, jellyfish produce sexually by spawning eggs or sperm into the ocean and fertilization takes place in the open water.

However, jellyfish reproduce in their polyp form as well. This is a process called budding, in which a polyp divides in half to create a genetically identical polyp.

Like many jellyfish, fried egg jellyfish are short-lived. They only live for about half a year, usually from summer to winter. Research suggests that this has to do with the variations in water temperature throughout the seasons. 4

People living off the coast of China have been eating jellyfish for at least the past 1700 years.

In fact, it is estimated that more and more people will turn to jellyfish as we overfish more desirable fish species. 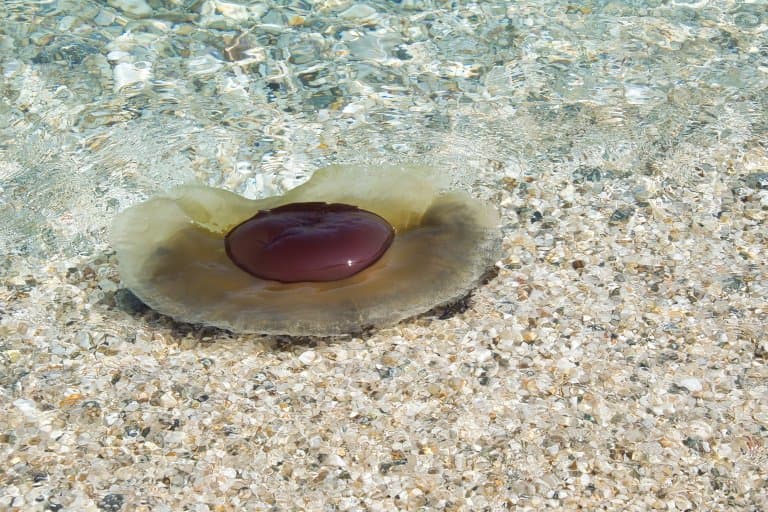 How do you like your eggs? Sunny-side up, or with a little sand?!

12. Crabs are known to hitch a ride on these jellies