Flying squirrels make up a tribe of almost 50 species in the family Sciuridae. They are known for gliding from tree to tree at heights of up to 500 feet with the help of their patagia—a furry membrane that runs from their wrists down to their ankles.

Found throughout North America, Central America, Europe, and Asia flying squirrels come in many colors and sizes, some being up to two feet long. They make their homes in the trees of forests, finding their way into tree cavities and abandoned bird nests.

Flying squirrels look very similar to their more grounded cousins, except for their patagia (the flaps of skin between their wrists and ankles) and large round eyes.

The fur color and markings vary by species, ranging from light gray and brown to deep red and even black. They have small faces with large ears and a fluffy tails that can match the length of their body.

Their mating cycles vary as much as their color. Some flying squirrels have one mating cycle per year, while others have two. They also tend to have multiple partners instead of just choosing one. The gestation period is roughly 40 days, with an average of three to four young being born.

Flying squirrels are considered omnivorous, though what they eat really depends on where they live.

Because so many different species inhabit different parts of the globe, the conservation status varies. In many places flying squirrels are considered to be common rodents. However, some species are suffering from the effects of climate change and habitat loss.

The Namdapha flying squirrel, for example, is listed as Critically Endangered by the IUCN due to logging, hunting, severe weather, and geological events. 1

1.    Flying Squirrels have been around for about 160 million years

Flying squirrel relatives have been present throughout Asia for around 160 million years. Asia has also played an important role in the history of flying squirrels, with vast forests providing both a sanctuary and a center of diversity. 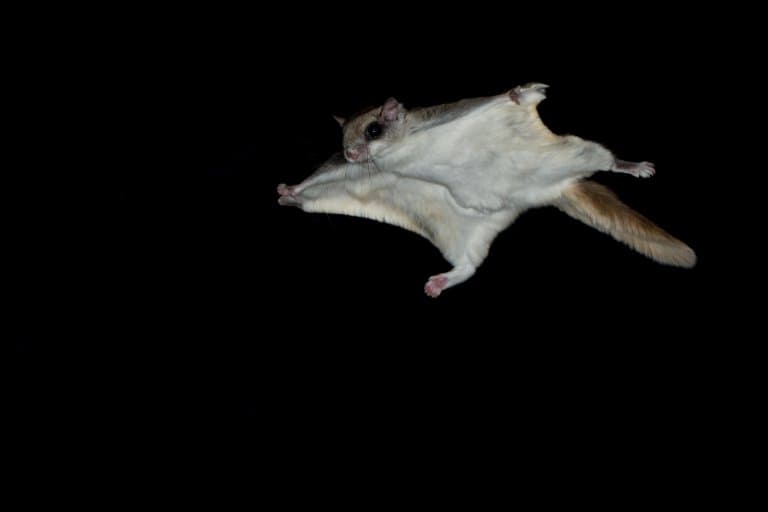 Flying squirrels can be found on three continents, however, their distribution is uneven. Forty of the known species are endemic to Asia, which means they can only be found there.

Only three species are known to inhabit the Americas and only one is found in Europe. 3

3.    Instead of wings, flying squirrels have patagia

When a flying squirrel wants to reach a tree that is out of reach, it just jumps out into the night. It then stretches its limbs to spread its patagia and begin gliding.

The patagia are the furry, parachute-like membrane that connects a flying squirrel’s front and rear limbs. These flaps capture air when the squirrel falls, allowing it to push itself ahead rather than fall.

Cartilage spurs at each wrist may be stretched out, expanding the patagia further than the squirrel’s small arms could on their own and ensuring that the patagia catch adequate air. 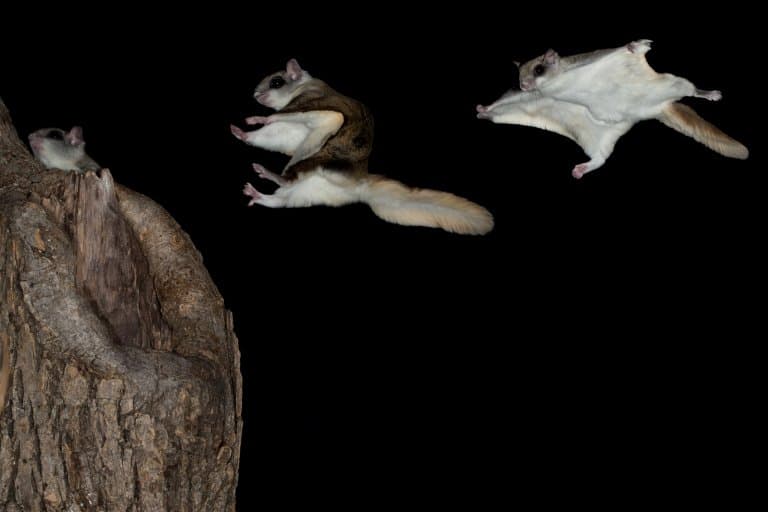 Flying squirrels may go long distances in the air. According to the University of Michigan Museum of Zoology, the average glide of a northern flying squirrel (Glaucomys sabrinusis) is roughly 65 feet (20 meters).

However, it can go considerably further, if necessary, with glides of up to 295 feet reported. It’s also incredibly nimble, making quick twists with its limbs, a feathered tail that acts like a rudder, and patagia muscles, enabling it to complete entire an 180 turn in a single glide.

5.    All species of flying squirrels are nocturnal

Though we are used to seeing squirrels running around during the day, flying squirrels are the complete opposite.

These nocturnal creatures spend their days asleep in hollowed-out tree holes, coming out at night to hunt and forage in the trees.

While it is unclear why they do this, it might be for a variety of reasons, including evading predators at night, communication, or the ability to navigate icy terrain. 4

One of the reasons flying squirrels appear so cute to humans is because of their large, round eyes.

Those eyes are a survival adaptation. Because flying squirrels are nocturnal, they developed large eyes to capture more light for improved night vision.

9.    They were the inspiration for base jumpers

Originally developed in the 1930s, the wingsuits used by base jumpers are structured with a similar look and shape to the patagia of flying squirrels.

However, with the use of modern technology, wingsuits are able to travel for miles instead of mere feet. 6

They’re also known to huddle together in hard winter conditions, occasionally sharing a nest with other squirrels. Huddling for warmth is so crucial that flying squirrels are known to share their nests with other forms of animals such as bats and owls.

11. They communicate with each other at a pitch humans can’t usually hear

They normally produce these noises in the first few hours after dusk to indicate their position and maybe the optimal sites for food. The frequency of these cries is greater than 20 kHz, the highest frequency limit of human hearing. 7

In the event that their primary nest is threatened, female flying squirrels will keep numerous backup nests.

If there is a predator attack or a forest fire, the mother will gather her young and transport them to the alternative nest for safety.

Because flying squirrels are active all year, they can accumulate up to 15,000 nuts in a single season. They store food in den trees or underground during the winter.

When eating tree nuts, they typically make one opening in the shell to obtain the flesh. Other squirrels and chipmunks, on the other hand, shatter the nuts into several pieces to get the flesh.

14. Flying squirrels have been kept as pets since the Colonial era

Flying squirrels became popular as pets in Colonial America and were often shown in portraits of children of the time.

People would rob squirrel nests of their young, domesticate them, and sell them as house pets.  These house squirrels were collared, leashed, and walked in the same way that dogs were.  Flying squirrels were especially popular among young boys, who taught them to sit on their shoulders as they traveled around town. 8