The flamingo (Phoenicopterus) is easily one of the most recognized birds on the planet. With s-curved necks, vibrant colors, slender legs, and wide wingspans, these beautiful birds are found in tropical areas in Africa, Asia, Europe, and South America.

As omnivores, flamingos feast on a host of organisms. They will often use their bills to filter food from the water and consume small prey such as shrimps and insect larvae. 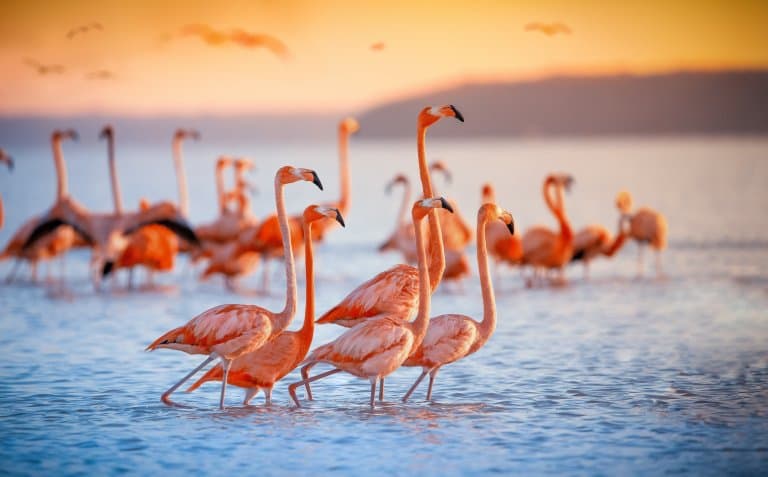 Flamingos are a wading bird, which means they are found along shorelines and on mudflats foraging for food in the shallow water. They build nests out of mud near coastlines and water, with enough room to incubate one large egg.

There are 6 flamingo species in total, with 4 in the Amercias, and 2 present in Africa, Asia and Europe. The tallest, the greater flamingo, can reach nearly 5 feet in height, while the lesser flamingo is only around 2.5 feet tall.

Currently, there are no flamingo species that are classified as endangered. However, there has recently been a decline in their numbers and the Andean flamingo is classified as vulnerable by the ICUN. The lesser flamingo, Chilean flamingo and James’s flamingo are all near threatened.

Global warming, habitat destruction, and food deficiencies are impacting populations around the globe. Some populations migrate throughout the year, making the study of certain groups more difficult.

1. The color and brightness of their feathers depend on what they eat

The pink coloring of a flamingo comes from beta-carotene pigments found in foods such as shrimp. The more pigment a bird consumes, the more saturated in color their feathers will be.

Caribbean flamingos are believed to have the brightest bodies. 1 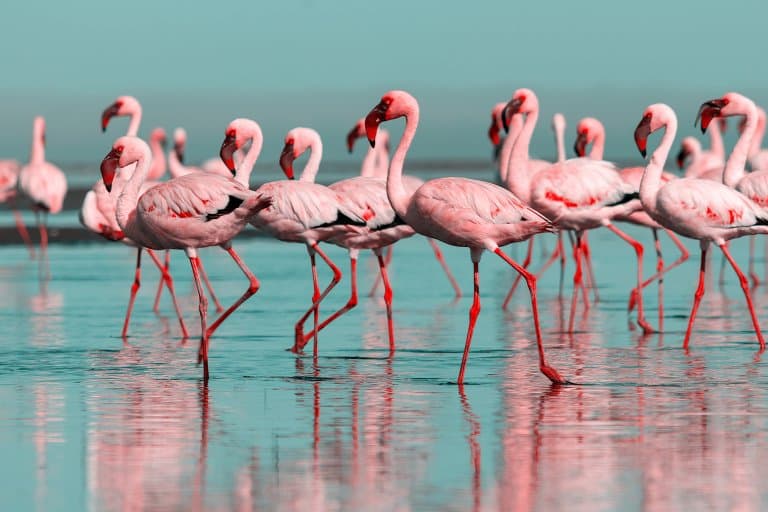 2. It is not entirely clear as to why flamingos stand on one leg

You may have seen flamingos standing on one leg in the water. Researchers are not fully certain as to why they do so.

Some have suggested that having one leg close to the body helps to conserve body heat while others propose the behavior is aimed at preventing fatigue and conserving energy.

3. A group of flamingoes is called a ‘flamboyance’

Flamingos live in extremely large groups called colonies which can contain 50 to several thousands of birds.

Together, members hunt, protect young, and keep an eye out for nearby predators. 2

This comes from Spanish or Portuguese and is in reference to their pink-reddish feathers.

5. Flamingos eat with their bill upside-down

Their bills are specially adapted to separate mud and sand from the food they eat, so they eat with their head upside down in the water.

This might seem backwards, but their bills are more effective this way with tiny openings at the top, which help filter the water, while their tongue helps pump water in and out to trap food. 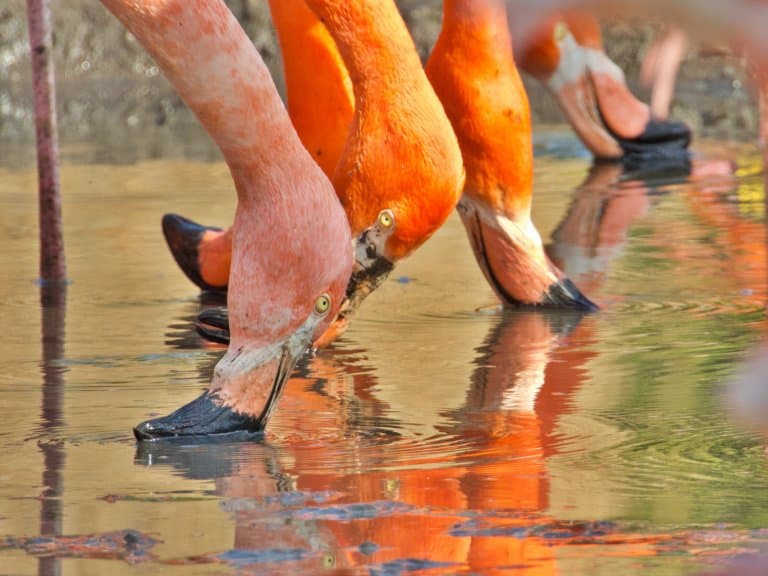 Flamingos kept in zoo’s have often had their wings clipped. In the wild, flamingos can fly, and they use their wings to migrate to warmer areas for winter and to search new bodies of water for food.

7. Once they find their mate, they will stay with them for the entire season

Flamingos are thought to be monogamous, meaning they will stay with a singular mate for the entirety of a mating season.

Together, mates will cooperatively make mud nests to incubate their eggs and raise their young. The following year, flamingos may find a different mate to pair up with. 8. Females will only lay one egg at a time

After mating, females will most often lay one egg.

Eggs can range in size depending on the species. Females and males will take turns incubating the egg. After approximately a month, the egg will hatch.

When they are born, flamingo chicks are gray or white. They will gradually develop color in the first couple of years. 3 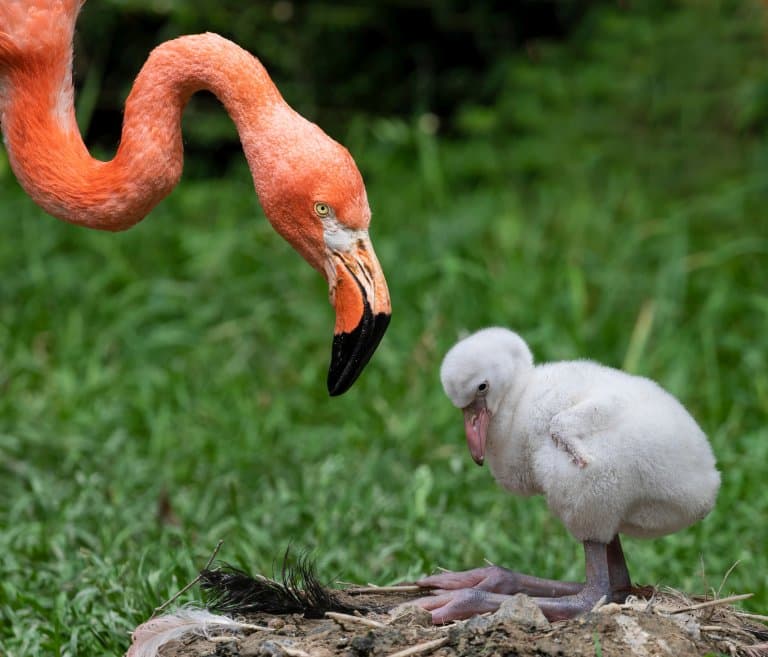 10. Males and females will engage in elaborate displays to attract potential mates

There are several dances that both males and females do to communicate their interest in a mate. To start, flamingos will carry out a “head-flag” that involves loud calls and a waving of their heads.

They will also spread and flap their wings in coordinated movements to express their vigor. 4

Crop milk is a substance produced by parents using their own digestive systems, it is regurgitated to feed chicks. In flamingos, crop milk is a blood-red color and contains high levels of protein and fat.

Near the end of the breeding season, parents often lose enough pigment from creating crop milk that their feathers are noticeably paler. 5

Out of the six species, the Greater Flamingo is known to be the most frequent flier to take to the skies.

When they take off, they will “run” on the water to pick up speed. Once they reach an adequate pace, they will lift off and soar to greater heights.

13. Flamingos spend a generous portion of their days preening

Like many other birds, flamingos will preen to clean and tidy up their feathers.

During this process, they will spread oils secreted by a gland located at the base of their tail. This oil works to protect against infections as well as to give the bird’s feathers waterproof qualities. 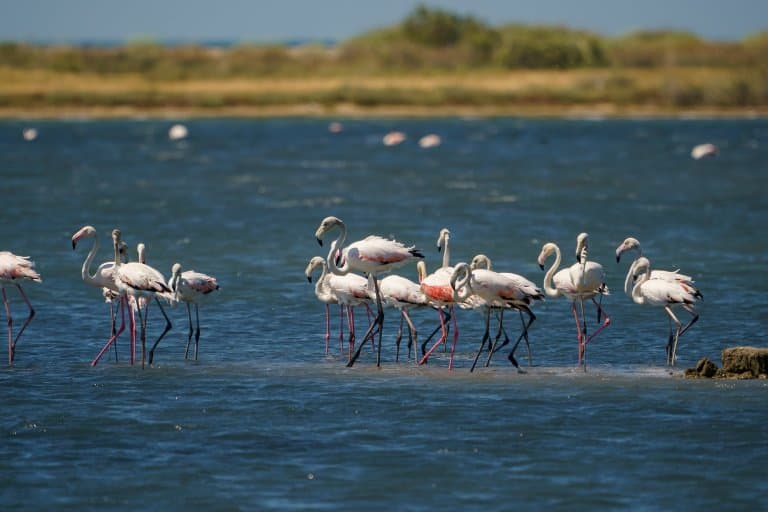 14. Chicks and parents recognize each other through distinct vocalizations

To distinguish their chick from the others, parents will remember and recognize their own young through special calls and noises.

15. They have hollow bones

For their height and size, flamingos are quite light—often weighing less than 10 pounds. They have hollow bones in some parts of their body that help them fly.

16. The flamingo is the national bird of The Bahamas

The Bahamas has one of the largest populations of flamingos in the world.

It is also one of the world’s breeding sites for the bird.