If you were to brave the icy depths of the abyssal plane and turn on a torch, you’d likely be treated to a vast expanse of mostly nothing. This is one of the most hostile environments on the planet and with such food scarcity and low oxygen levels, only the most horrifyingly resilient can survive. 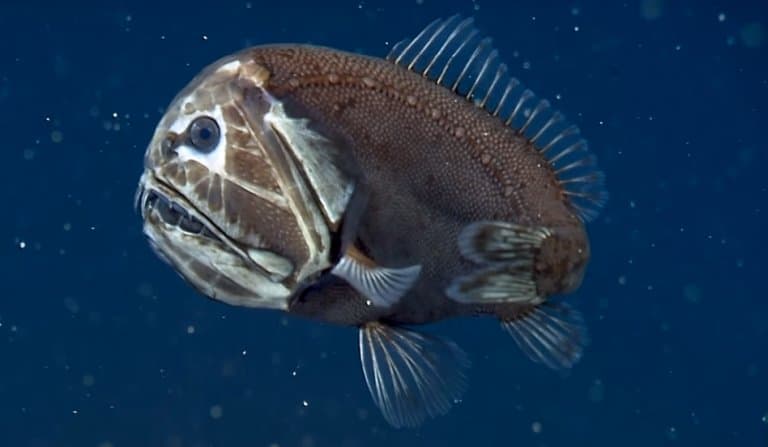 They are among the deepest-living fish in the ocean and can be found as far as 5,000m (16,000-feet) under the sea. They are thought to diet on other fish, shrimp and other crustaceans it can find.

We know more about their young than the adults, as they descend when they mature and are hard to find and study. However, from multiple specimens, alive and dead, we can infer numerous pieces of information about how they live, what they eat, and how they function with those cumbersome teeth.

What remains to be known is just as exciting as what we already know, and it’s almost certain that this fish hasn’t given up all its secrets to us yet.

1. We don’t know how big they can get

Adults of the Anoplogaster cornuta species have been recorded reaching up to 18cm long. However, they’re mostly found in very deep sea, and most studies are conducted above 2,000m due to logistics.

The shorthorn Fangtooth, Anoplogaster brachycera has only been witnessed in young and juvenile forms. While it’s thought that this is the smaller of the two species, it’s impossible to tell without ever having witnessed a mature specimen.

As you’ll come to learn from this article, there’s quite a lot more we don’t know about the Fangtooth.

These fish live as deep as 5,000 meters, making them one of the deepest-living fishes we know of. As such, we can only really infer what they do from their adaptations. 1 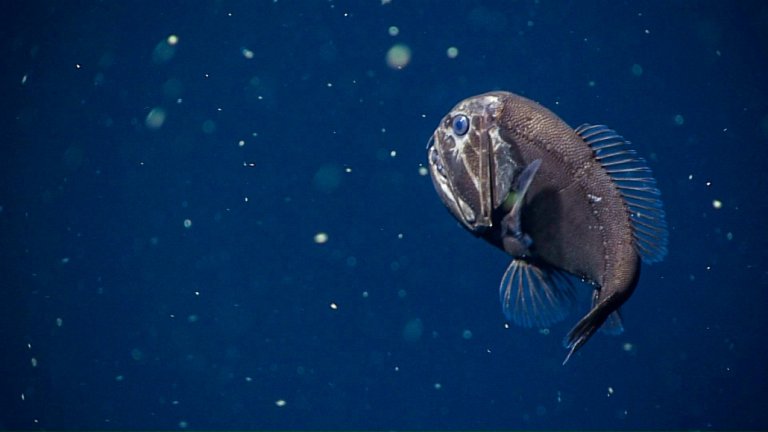 2. They have powerful musculature

The muscles on a Fangtooth suggest a powerful bite and the ability to move quickly and with power.

As close to proof as we’ve got, this has been somewhat demonstrated in some intriguing documentary footage.

Despite the Fangtooth footage in BBC’s Blue Planet 2 being shot in a container on board a ship, its ferocious attack on a hapless shrimp does go some way to demonstrating the explosive power of this fish.

Still, no such attack has ever been caught in the depths, so a lot has to be left up to the imagination. 2

3. They have the largest teeth in the ocean

Well, proportionally, at least. Relative to their body size, fangtooths are record-holders for their enormous teeth.

The largest two fangs of the lower jaw are so long, they have evolved specialized sockets either side of their brain to help close their mouths – although they are unable to close them fully!

Although the 14 enormous fangs are a third of the size of the fish itself, for its prey, they are only the beginning. Inside this scary mouth sit rows of small teeth around the gill arches, helping to hold onto smaller prey items.

All of these teeth seem to be laterally flexible, suggesting they can be used to manipulate food items of various sizes, and facilitate its movement deeper into the mouth. 3

4. The young have filters

These “gill rakers” are present in juvenile fangtooth fishes, and suggest that for a while, at least, they are filter feeders. This may change as they mature, but in the case of the shorthorn fangtooth, as mentioned, no adults have been discovered.

Fish have an incredible capacity to morph their bodies as they mature, so the adult could look distinctly different than what we may expect!

Many deep-sea creatures totally lose all form and function when brought to the surface. If you’ve ever seen pictures of a blobfish, you’re witnessing what becomes of a relatively normal-looking fish when the pressure is reduced from 1,200 atmospheres to almost zero.

In contrast, fangtooths have been successfully kept alive for at least brief periods of time at surface pressure, demonstrating that they’re well built for diurnal vertical migrations: trips up and down the water column during strategic periods of the day.

In a lab setting, it was found that pressure on the fish had no impact on its ability to breathe.

6. They have a sixth sense

The lateral line organ (LLO) is an organ found in many fishes used to detect motion and pressure changes. It’s essentially a row of cellular hairs, much like microscopic whiskers that run down the side of the fish and send signals in response to changes in motion.

In fangtooth fish, this is extremely well-developed, which compensates somewhat for their lack of eyesight. This development also suggests that these fish school, as social, schooling fishes tend to have a more developed LLO than those who don’t. 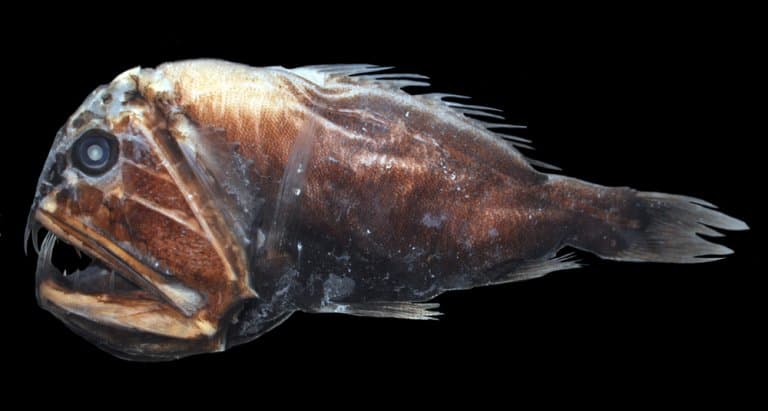 7. The juveniles have swim bladders

In many deep sea creatures, the young begin life in the nutrient-rich shallower waters and migrate downward as they mature. This is thought to be the case in fangtooth fishes, whose young look very different from the adults. The young have larger eyes, smaller teeth, and are much more presentable than their final form.

The swim bladders allow them to adjust their depths within these shallower waters where necessary and disappear when the fish morphs, at which point, presumably, it’s too ugly to be allowed to stick around and is bullied into the depths. 4

Like many deep-sea fishes, the fangtooths are a bit of a mystery.

The sheer hostility of the environment to human presence makes it next to impossible to investigate on any large scale, and so most of what we know about these animals comes from what washes up on the shore during tsunamis, or the very rare and limited deep-sea expedition.