Fainting Goats are a goat breed that keel over and ‘faint’ when startled, excited or surprised.

This hereditary condition in fainting goats is called Myotonia Congenita (muscle stiffening), which causes muscles to become rigid instead of relaxing when a goat is alarmed. 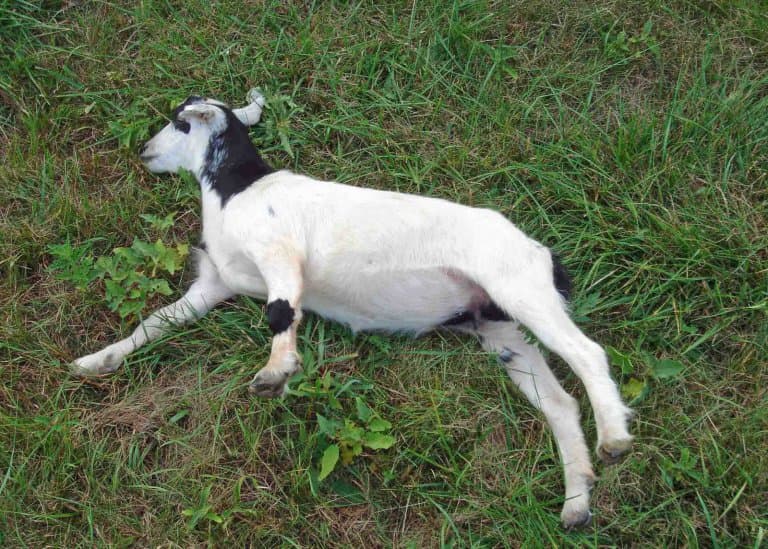 They belong to the Bovidae family (hooved animal). A travelling farmer first brought this American breed to the country at the end of the 19th century.

At the time, there were only a handful of specimens back in 1880. Still, their peculiar behaviour made them a popular breed, and they quickly populated throughout Tennessee and across the American south.

Fainting goats don’t lose consciousness when they faint. They lay on the ground, unable to move due to the stiffness in their muscles – especially the legs and neck.

The fainting episode doesn’t last very long, and they are soon up and running around again – until the next time they are spooked!

1. Their origin story stems from a travelling farmworker

John Tinsley brought four fainting goats to Tennessee in the 1880s – as far as it is known. After a year on Dr Mayberry’s Farm, John moved on and left behind the four goats (one buck and three does). 1

2. The fainting goat was a new breed of goat

Dr Mayberry decided to breed the goats and noticed that the kids also got stiff and would fall too, so Dr Mayberry concluded that this was a new breed of goat. Hence the name ‘Tennessee fainting goat‘ was born.

3. They suffer from a disorder called ‘Myotonia Congenita’

Myotonia (a condition which affects both animals and humans) is a muscle stiffness disorder that causes the goat to tense its muscles when startled or excited. As the animal’s muscles don’t immediately relax after the fright, it will stiffen and fall.

4. Fainting Goats take up to 20 seconds to stand again after fainting

It takes around 5 to 20 seconds for the imbalance of positively charged sodium ions and negatively charged chloride ions to equal out in Myotonic goats. Thus, the time it takes for fainting goats to relax and be back on their hooves. 2

5. The level of fright will determine the level of stiffness they feel

The degree of stiffness in their Myotonia Congenita can vary from goat to goat and depends widely on several factors, including age, species purity and level of fright.

“If these goats are suddenly surprised or frightened, they become perfectly rigid. While in this condition, they can be pushed or turned over as if they were carved out of a single piece of wood.”

6. They are aptly called the Tennessee Fainting Goat

However, they have many nicknames. They’re also known as, Stiff-Legged, Wooden-Leg, Myotonic, Nervous Goats, or Scare Goats

7. Whilst adorable in doing so, they don’t faint all of the time

They are a unique breed because not all goat species do faint. This adorable, quirky trait makes them a popular farm animal to have for the novelty factor. However, it is also noted that any given goat can go without a fainting episode for weeks at a time.

8. They are loving, affectionate and slightly mischievous animals

Fainting Goats are the perfect animal to have as a pet because they tend to be very loving with affectionate personalities. They are very sociable and flourish well with children and can make excellent playmates for other farm animals.

9. If they’re making a noise – go and investigate

They are generally a quiet breed of a goat, so it’s most likely for a good reason if they are bleating.

10. They are herbivores and love to eat edible plant matter

They have always lived in man-made habitats, farmland and paddocks with plenty of grasses, hay and shrubbery to graze on.

Unlike their Pygmy Goat cousins, Fainting Goats cannot jump too high (over 1.6 feet) as when they do; they can get excited and faint. This makes them easy to care for as they’re not little escape artists like most other goat breeds.

While most fainting goats have short hair, long-haired goats are not unusual, and some animals produce cashmere. Different colour combinations pop up every kidding season.

13. A group of goats is called a trip or tribe

These groups consist of young goats (kids) and adult male goats (bucks or billies), and females (does or nannies), and a group of goats is called a trip or tribe.

Fainting Goats generally produce twins or triplets and make excellent mothers, even hiding and protecting the new born kids for a few days, so for farmers searching for multicoloured kids in the hours after their birth can be exciting.

14. They are a novelty animal also breed for meat

Towards the late 1980s, a re-emergence of the breed was discovered, with both Tennessee and Texas breeders finding a newfound interest in two very different efforts. One group stuck to tradition and bred for meat qualities and reproduction. The other group selected their goats for small size and extreme stiffness and promoted the breed as novelty animals.

15. They’re famous in their own right, starring in memes and GIFs

Fainting Goats have been the star of the show within modern pop culture and the arising meme and GIF creation. 4 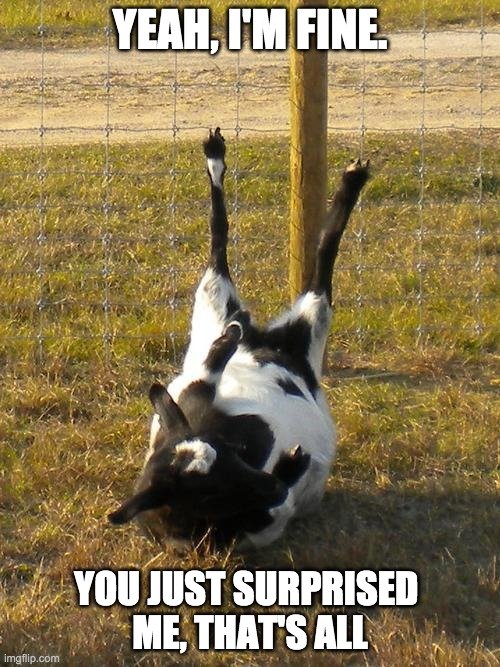 16. Historically they were used as a sacrificial lamb

They have a fascinating historical purpose where farmers would keep fainting goats to be the ‘sacrificial lamb’ to predators who would otherwise eat expensive livestock. For example, when a wolf attacks, the goat faints and becomes the easy prey, allowing the livestock to escape unscathed. Mercifully, fainting goats are no longer used in this way. 5

17. When cross-bred with other goats, they don’t pass on the Myotonia Congenita condition

The recessive gene that causes Myotonia Congenita needs two copies – one from the mother and one from the father – to pass on the disorder. So, when fainting goats are cross-bred with other goat breeds, they generally don’t pass on their hereditary condition. 6