The Dumbo octopus has been labelled by many as the cutest octopus out there. They are so named because of the Dumbo the elephant ear-like fins that protrude from the sides of their heads.

These fins help them move through the water and navigate through ocean currents. They also allow the cephalopod to hover as it searches for prey.

Found in waters throughout the world, these adorable creatures are bell-shaped, pale in color, and possess short stubby arms. 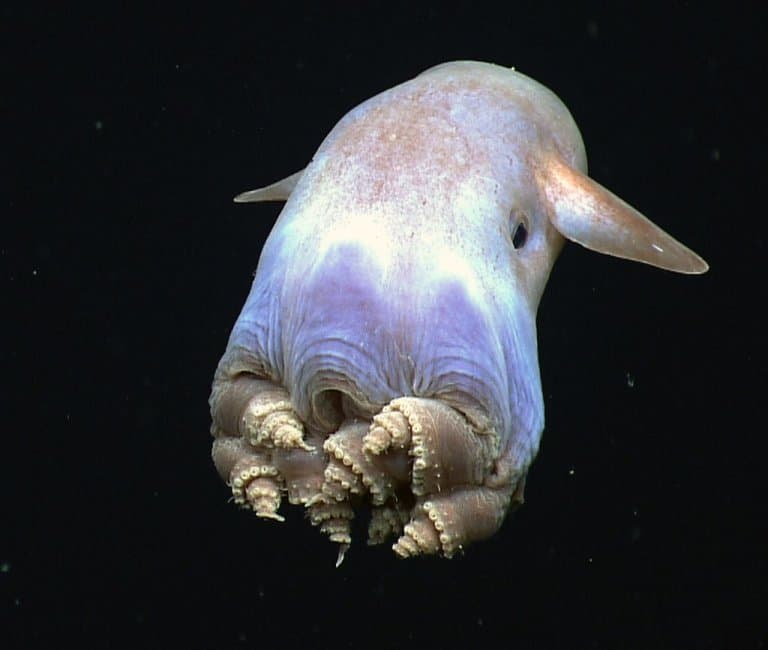 Dumbo octopuses have been found in Australia, California, Philippines and New Guinea. They live in extremely deep waters, where it’s very cold and there is an absence of light.

The Dumbo octopus is actually an entire genus of 17 different species of octopus.

Belonging to the Opisthoteuthidae family, they are a type of umbrella octopus. This means that they have webs of skin connecting their tentacles. It is what gives the octopus its round bell shape. Their soft and jelly-like structure helps them manage the high pressures of their deep ocean habitats.

They are carnivores, and diet on crustaceans, bivalves, worms and copepods. Both prey and predators are quite sparse at the unfathomable depths dumbo octopuses live, so there remains much we do not know about this elusive animal.

1. They live at extreme depths

Dumbo octopuses are the deepest-living octopuses known to man. They can be found at up to 13,000 feet below the ocean surface. 1 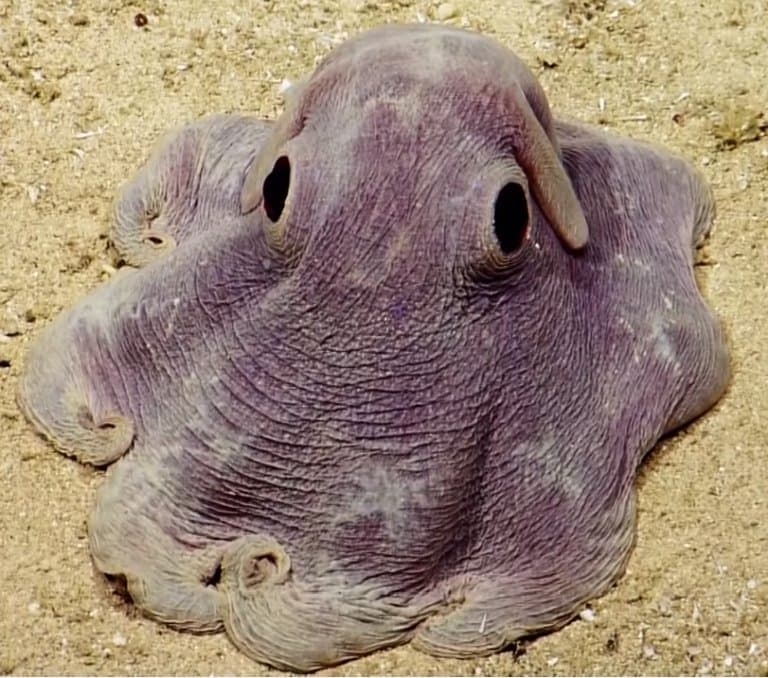 2. Unlike others, they cannot move by jet-propulsion

Many squid and octopus species can engage in jet propulsion—the process of expelling water at high velocities to mediate movement.

Dumbo octopuses use their fins and arms to steer themselves around.

The iron in human blood is what makes our blood appear red when exposed to open air. Dumbo octopus blood is blue in colour because of its high copper content.

Copper is a more efficient at circulating oxygen through the body when temperatures are very low. 2

4. They have three hearts

Octopuses have three hearts that all help circulate blood through the body and back to get reoxygenated again. One of the hearts is responsible for pumping blood to the body while two propel blood past the octopus’s gills.

5. Their huge eyes help them see in the dark

As a deep-sea animal, dumbo octopuses have huge eyes that can, at times, measure a third of the width of their head. These aid in capturing the tiny amounts of light that reach them from the surface. 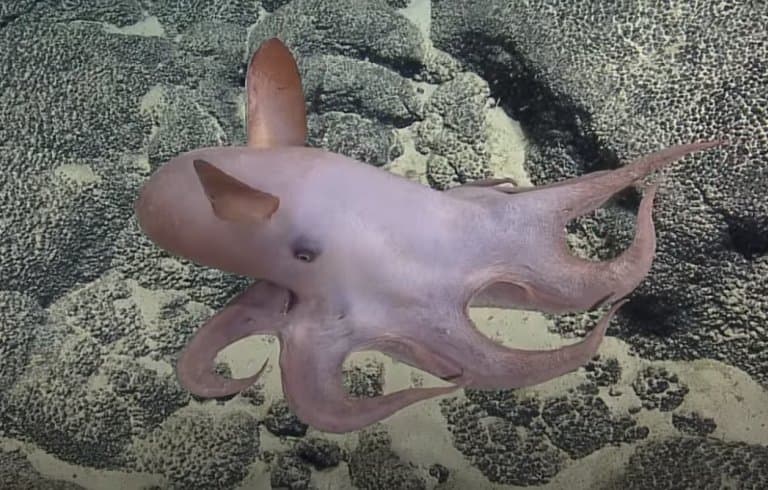 6. Dumbo octopuses do not have ink sacs

You might be familiar with the ink sac, a common defense mechanism that many octopuses use to deflect predators.

Since dumbo octopuses live at such deep depths, they do not employ this method of escaping from close encounters.

7. A new species was recently discovered

In 2016, a new species of dumbo octopus was found. Nicknamed the “Emperor Dumbo”, this particular species was determined to be unique from known species using magnetic resonance imaging (MRI) and micro-computer tomography (micro-CT) techniques. 3

8. They swallow their prey in one big gulp

When dumbo octopuses find tasty prey, they pounce and eat their victims whole.

They are foragers that search for small invertebrates. There is still much to learn regarding their diets due to how isolated they are above the seafloor.

10. They do not have a breeding season

Male dumbo octopuses transfer sperm to females who then use them to fertilize eggs that she has laid on shells or rocks. Females have been found to fertilize eggs at different time points throughout the year, so it is believed that there is no specific season during which they are more sexually active.

11. They can color change

Masters of camouflage, many species of octopus can change the color of their skin. Dumbo octopuses are no exception.

Hue shifts are facilitated by chromatophores—miniscule color-changing organs, found just beneath the skin’s surface, filled with pigment. They can also, stand out! 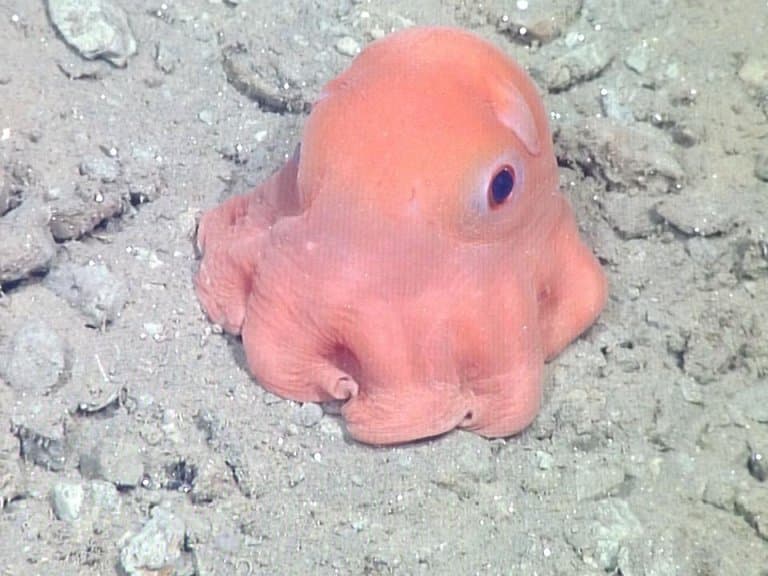 12. Females can store sperm until their eggs are ready to be fertilized

Males transfer sperm packets to females via a hectocotylus, an arm-like structure that extends into the female’s mantle. The female can then store these packets until fertilization conditions are optimal.

13. Hatchlings are fully formed at birth

Once released from the egg, dumbo octopuses are competent and able to care for themselves. Their yolk sacs contain nutrients that nourish the young hatchling after birth. This gives it time to learn hunting techniques in its first few days. 5

14. You will never find one in captivity

Accustomed to highly pressurized environments, these octopuses would not survive in manmade tanks.

Removing them from their natural environment would kill them so, as cute as they are, they cannot be kept as pets or in aquariums! 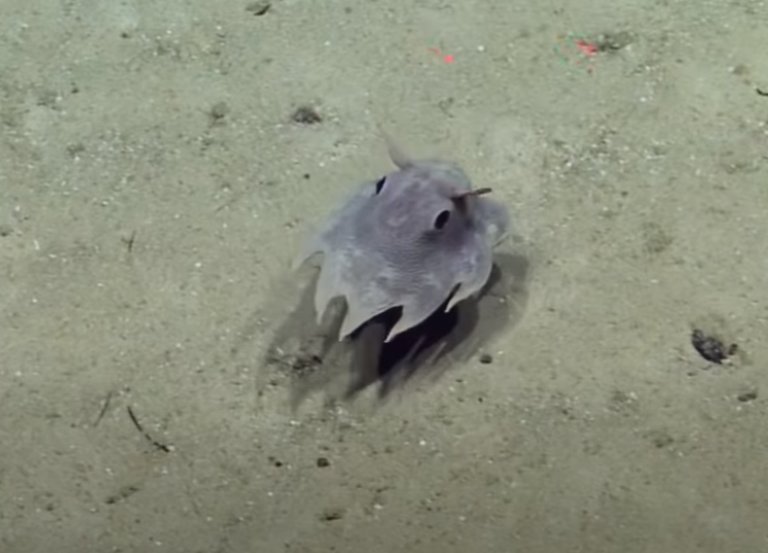