De Brazza’s monkeys are Old World monkeys that live in the riverine and swamps forests of eastern and central Africa.

The monkeys’ bodies are covered in black, brown, and grey fur with a white stripe running along each thigh. On their foreheads are their most recognizable feature—a striking patch of orange hair right above the browbone.

They are the largest monkey species within the guenon family of Old World Monkeys. 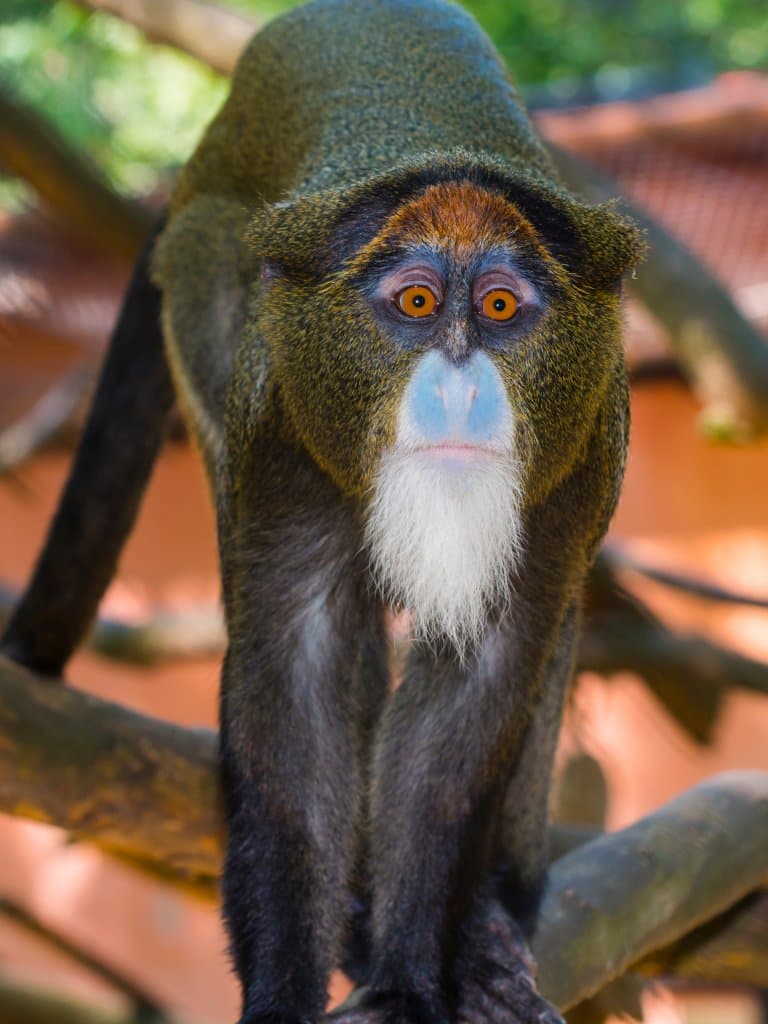 Like other Old World monkeys, De Brazza’s monkeys are spread across a large geographic area. They can be found in Cameroon, Gabon, Congo, Kenya, Nigeria, Ethiopia, Angola as well as parts of Uganda. They prefer areas with dense vegetation, but they also prefer habitats closer to water.

Unlike other guenons (a family of monkeys characterized by bold markings), they tend to live more on the forest floor and spend less time in trees. They typically live in groups known as ‘troops’ of between 4-10 mixed individuals, although occassionally males can be solitary.

De Brazza’s monkeys diet on herbaceous plants and fruit mainly, but will also eat seeds and insects from the forest floor.

Due to the mysterious nature of these animals, there is still much more to be learned about De Brazza’s monkeys.

1. They are extremely territorial

De Brazza’s monkeys are social animals that live in small groups of 4-10 animals. However, they are highly territorial and do not tend to interact with other monkey species.

Males can be heard early in the morning making ‘booming’ calls, to establish their territory. 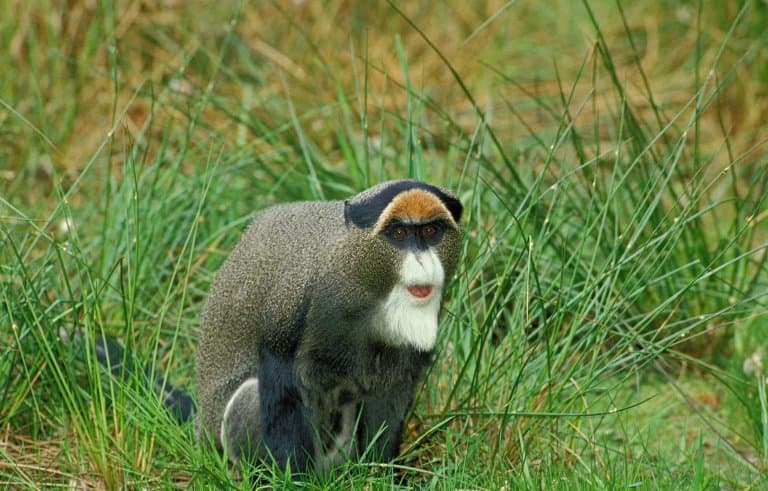 2. Males and females differ greatly in their appearance

This monkey species is sexually dimorphic. Males are almost twice as heavy as females and are marked by a distinct blue scrotum. 1

3. They are fantastic swimmers

Adults are commonly found around water and are known to be very capable swimmers.

Their scientific name ‘neglectus’ means to ‘pay no attention to’ –  in reference to their ability to hide from both humans and predators.

5. Depending on their location, De Brazza’s are either monogamous or polygamous

In certain populations, dominant males will breed with multiple females.

In other areas, males and females will develop lasting bonds, form families, and work together to rear young. 2 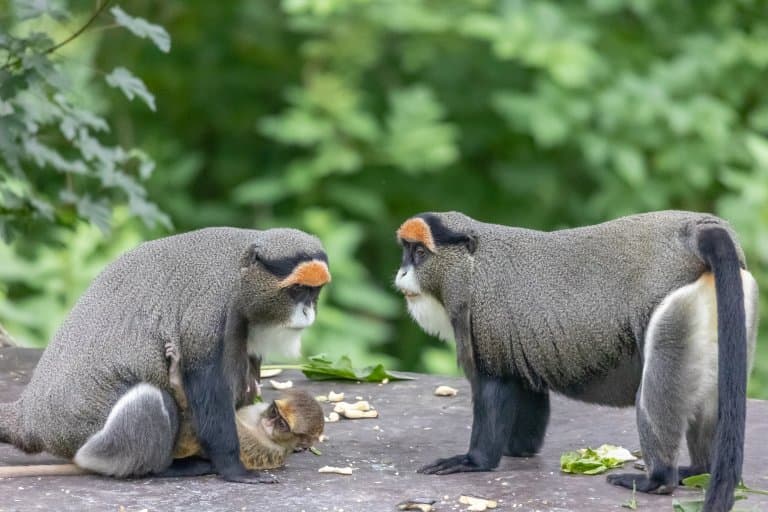 6. They can store food in their cheeks

Like squirrels and chipmunks, De Brazza’s monkeys have cheek pouches that they can store food in.

During gestation, pregnant mothers will eat more protein-rich foods for the development of their fetuses.

They eat mostly fruit but supplement their diets with insects, vegetables, and small reptiles. After birth, babies rely on the milk of their mothers, but will be fully weaned after a year’s time. 3 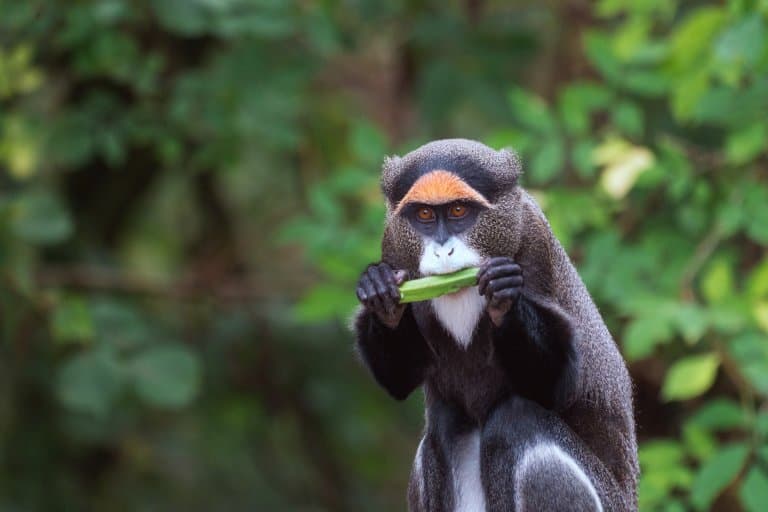 9. They freeze up when faced with a predator

When a predator is detected nearby, De Brazza’s will freeze up, staying still for up to eight hours until they no longer feel threatened.

10. Unlike other monkeys, they are not the most vocal

They rarely use their voices but will emit calls and cries when predators are nearby or by a young monkey looking for its mother.

11. It takes a couple of weeks for young monkeys to gain their adult coloring

At birth, infants are golden. After about six weeks, their white beards will begin to appear and by five months, they will have grown the characteristic patch of orange hair over their eyes.

12. These monkeys need a few years before reaching adulthood 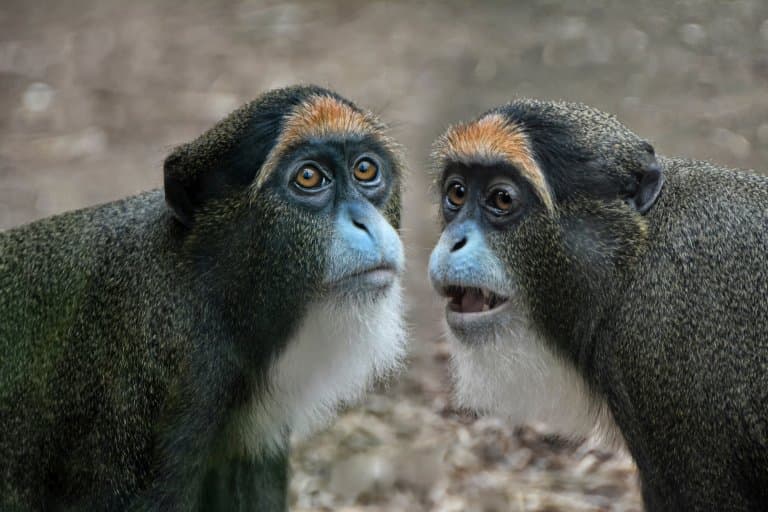 13. They are a protected species in some parts of the world

In Ethiopia, De Brazza’s monkeys have been protected since the mid-1970s. There are regulations prohibiting the hunting and trapping of these animals.

While the IUCN classifies De Brazza’s monkeys as a species of least concern, there are populations affected by habitat loss due to forest clearance for timber and agriculture.

It is estimated that, currently, there are over 100,000 De Brazza’s monkeys left.