When you think of bees, you think of the happy little pollinators in the lavender gardens, or the clumsy-looking fluff balls that bumble between your favourite flowers.

What you might not know is that there are so many species of bee that experts have more or less given up trying to identify them all. And among these countless species are some who have taken a darker path.

One such lineage are known as cuckoo bees, who have evolved to lay their eggs in the nests of other bees, reminiscent of cuckoo birds. 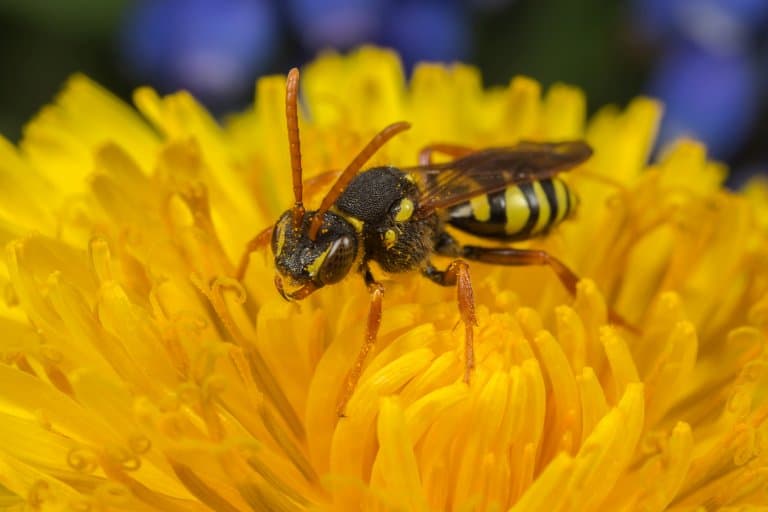 Cuckoo bees, while they may be as busy as other bees, certainly aren’t spending that time looking after their young.

Instead, they find other bees to do that for them and have special adaptations that make them very good at it.

They represent at least 15% of all bee species, and more are being discovered all the time.

Cuckoo bees are defined by their behaviour of infiltrating the nests of other bees. They do this to lay their eggs inside the nest so that they can outsource the whole job of protecting and feeding their young to the hapless host bee.

Similarly to cuckoo birds, when the parasitic bee’s evil spawn erupts, it’s likely to kill and possibly eat the host’s larvae, as well as any food stores the mother left behind.

This form of parasitism is called kleptoparasitism, except in the case where the host directly feeds the parasite, in which case it’s an example of brood parasitism. 1 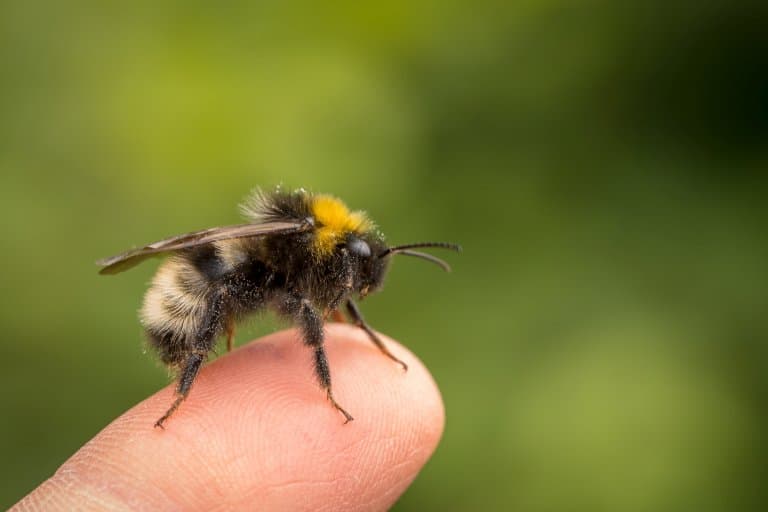 2. There are loads of them!

This parasitic behaviour has evolved independently in a remarkable number of bee lineages.

Sixteen of these are described as parasitizing social bee colonies, and a whopping 31 lineages, and several thousand species prey upon solitary bee species.

The nature of the cuckoo bee is one of relative irresponsibility when it comes to brood care.

Many solitary bee species leave their young to fend for themselves, but at least they tend to leave a plug of honey and pollen behind for them to eat when they hatch.

Cuckoo bees can’t do this, because they don’t have the hardware. No pollen baskets like honey bees, and no hairy belly like the solitary Megachillid bees.

So they have to find another way to take care of their babies, and for this, they have some other adaptations too. 2

4. They have reduced body hair

When you see a parasitic bee, there’s a chance you’ll mistake it for a wasp. Parasitic bees, like wasps, have reduced hair on their bodies, giving them a more shiny appearance.

They are specially adapted in this way for the same reason that wasps are. 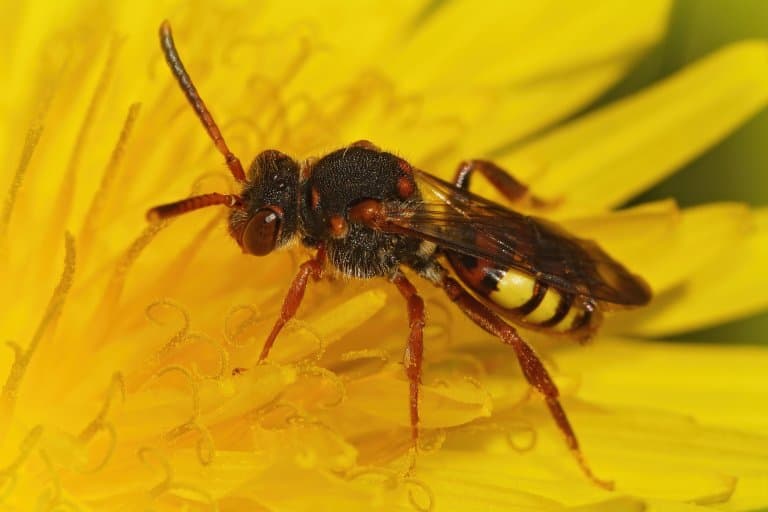 Most bee species aren’t really built for battle. They’re generally peaceful creatures, and would rather be lightweight and agile to save space for pollen and nectar. Of course, they can sting when they need to, but non-parasite species very rarely need to.

Cuckoo bees, on the other hand, are built for battle. They don’t need to carry pollen and nectar, since their hosts will be doing all that for them.

Instead, and particularly in parasites of social bees, there is a need to be ready to fight.

If a guard bee from the host colony hears the foreign accent of the interloper, all bets are off, and further, in species that kill the host queen, the parasite needs to come off best.

For this reason, they’re built a lot thicker and have a more dangerous and powerful sting.

Some of the most strikingly beautiful cuckoo bees are in the Thyreus genus.

Thyreus species make up at least 25 cuckoo bee species, and they’re in the same family as the bees you know best: Apidae. This family contains bumblebees and honeybees, as well as the carpenter bees and stingless bees.

These are a genus of bright blue-striped bees that live primarily in Africa and Australia.

Their hosts are mostly a cute little genus of digging bees called Amegilla, who also sport some nifty little blue bands on their abdomens. And this may not be a coincidence! 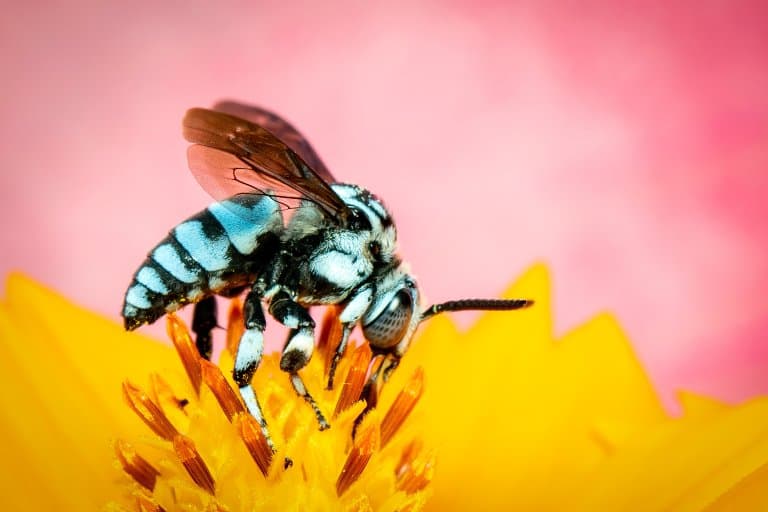 In parasitism, there’s a pattern that’s recognised across the animal kingdom and even into other kingdoms like fungi and plants. The pattern goes that social parasites are very often closely related to their hosts, and will often have physical similarities to them.

This rule was proposed by and later named after, Carlo Emery.

Clearly, the striking lack of resemblance between a pig and its tapeworm suggests that this pattern may not extend outside of social parasites – that is, those parasites who exploit the parental care of another organism – and even within social parasites, many people are pointing out plenty of exceptions, so this isn’t a hill to die on, by any means, but it could be a hit as to why both Thyreus and Amegilla share some common traits.

Cuckoo bees are so prevalent that even some of our beloved bumble bees have chosen the dark side.

Cuckoo bumblebees are brood parasites of common, more good-natured bumblebees, and although we’re being kind of mean to the parasite, they don’t have much of a choice in the matter either.

Cuckoo bees commonly are entirely unable to collect pollen so are physically unequipped to look after their young themselves, as is the case here.

The cuckoo bees somehow get past the defences of their hosts and disguise themselves as family. This is done with varying degrees of success, and the use of clever pheromone mimicry.

How their larvae persuade the nurse bees to feed them, however, remains a mystery! 3

9. At least half the species on Earth are parasites

In case you were thinking that these behaviours are those of a few bad apples, think again.

Parasites make up a significant chunk of all life and are as deserving of protection as any other animals because of that. 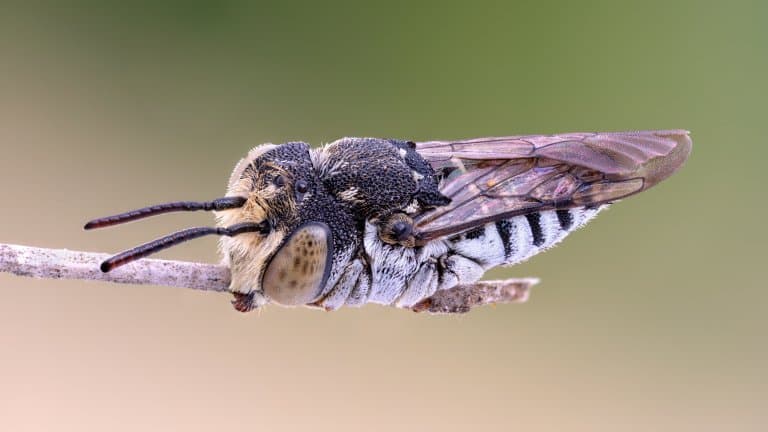 Just to drive this point home, there’s a distinct sense of disgust when thinking about parasites, and often for good reason.

They’re commonly painful, damaging, and often lethal to both us and the animals we like. But much like the lion needs to kill the antelope, parasites are often obligated by their nature to do what they do, and in many cases, they’re actually beneficial to the ecosystem as a whole.

Parasites and their hosts have coexisted since almost the dawn of life. As a result, they’ve developed an incredible array of attacks and defences, genetic complexity, and even total symbiosis. Parasites provide both selective pressure and a prey source for other animals, and in many cases are keystone species themselves.

It’s thought that there are more parasites than predators and that parasitism may be the most widespread life-history strategy in nature. Also, many, like cuckoo bees, are cute! So, cut them some slack. 4