The flying lemur, or colugo, is a tree-dwelling gliding mammal found in South East Asia. While they are known as flying lemurs, they are not actually lemurs, and they also can’t fly, but instead glide.

There are two species of them, the Sunda flying lemur (Galeopterus variegatus) and the Philippine flying lemur (Cynocephalus volans). 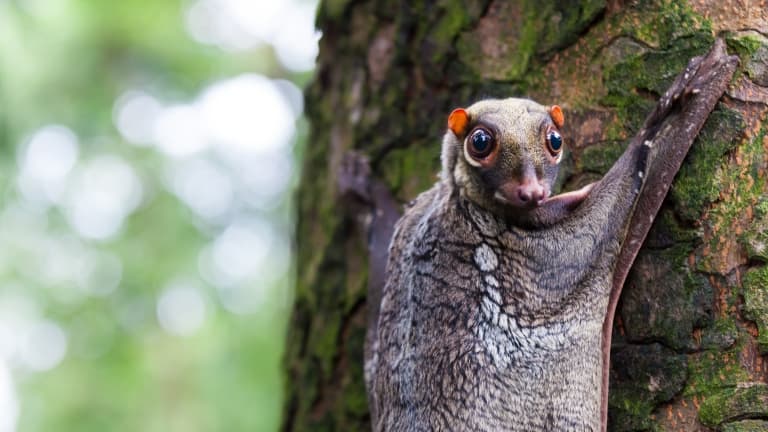 They are well known for being one of the best gliders, with a large membrane connecting all four limbs and their tail which allows them to “fly” for up to 200 meters between trees.

They are nocturnal, meaning they only come out at night. They are herbivores, consuming leaves, flowers, shoots, and fruit. They are solitary and shy, meaning not much is known about their behaviour.

1. They are not lemurs

While they may look like Lemurs, they are not. However, they are closely related to both primates and tree shrews. 1

The only mammal which can independently fly is the bat. Instead, colugas glide which works in the same way as a wingsuit.

3. They are the best adapted of all the gliders

There are several gliding mammals, but of all of these, the Colugo is the best at gliding. They achieve this via the fury membrane connecting their limbs and their tail, making one big sail-like shape. 2

While they don’t actually have wings, the membrane (called the patagium) they use to glide spans 30 to 40cm when extended. This is one of the biggest amongst gliding mammals.

5. They have webbed feet

This is the same as bats and helps them fly. 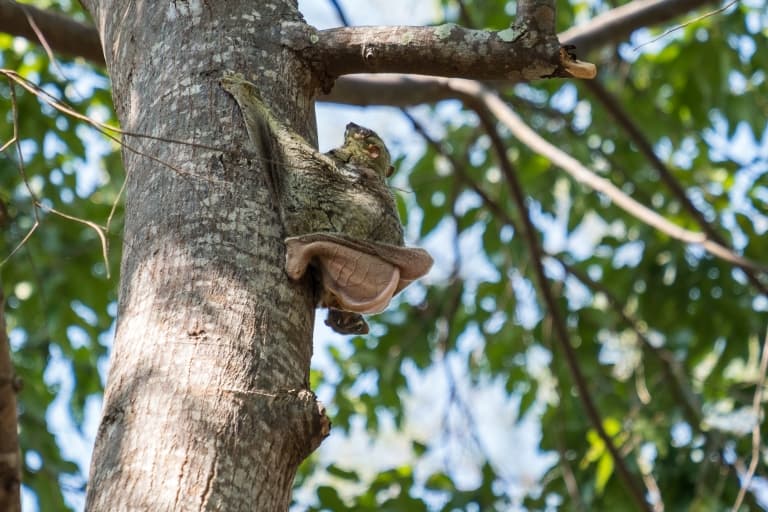 6. They have a very light skeleton

Their skeleton is lighter than that of a squirrel, which helps them to glide for long distances.

7. No one is quite sure why they evolved to glide

Scientists thought that they evolved to glide as it saved energy, this however doesn’t seem to be the case. This suggests that there must be another reason. 3

8. They have comb-like teeth

Their teeth look like a tiny comb. These are excellent at slicing through leaves for food.

While they are mammals, they look after their young in a pouch like marsupials do. Their mother creates a pouch using her flying membranes which the baby stays in for the first 6 months.

10. Baby Colugos are just 35g when they are born 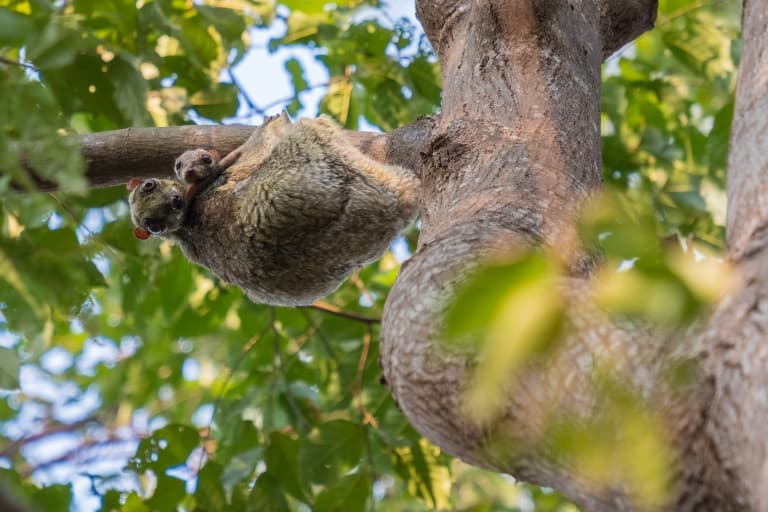 11. They have excellent eyesight

As they are nocturnal, they have to be able to see well at night. This is what gives them their large, adorable eyes.

This eagle is focused specifically on hunting the Philippine colugo, which makes up 90% of its diet. This eagle is at risk of extinction, making the colugo important for its continued survival.

13. They can be found in coconut, banana, and rubber plantations

As agriculture has moved into their habitat, they have started to move away from intact rainforests and into plantations.

14. Both are at risk from habitat destruction

The Philippine Colugo was taken off the endangered species list in 2008, however both species still struggle with habitat loss.