The largest crab is over three meters across and covered in spines. Thankfully, it’s confined to the depths of the ocean. However, it has a distant cousin who is much less restricted.

This monster arthropod breathes the same air we do and sneaks into your garden at night to disappear with some of your possessions.

Sometimes called the robber crab or palm thief, coconut crabs are enormous, terrestrial hermit crabs that can grow up to 1m (3 feet) in width. 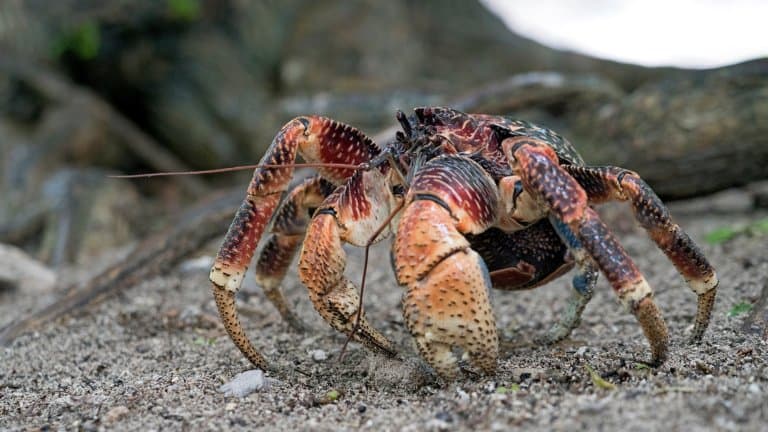 Coconut crabs are the largest terrestrial invertebrate and come with incredible strength behind them too. They’re different from their marine relatives in several significant ways, not least of which is their ability to breathe air and function in three dimensions.

They inhabit islands across the Indian Ocean and parts of the Pacific, but are locally extinct on mainland Australia and Madagascar where they used to roam amongst the the coconut palm. The densest population of cocunut crabs is on Christmas Island in the Indian Ocean.

Coconut crabs are solitary and live in burrows and rock crevices, where they stay hidden during the day to escape from the heat.

They will diet upon fruits, nuts, seeds primarily – but will investigate anything lying on the floor as a potential food source, and have been known to eat carrion and other animals opportunistically.

They’re tough as nails, but they have a sensitive side, but if you’re unlucky enough to fall sick on their turf, they just might be your worst nightmare…

While most hermit crabs spend the majority of their time in the water and love to swim, coconut crabs have adapted to life on land in various ways. In their early stages, the larvae are planktonic and float about wherever the ocean takes them, as they age, much like other hermit crabs, they adopt second-hand gastropod shells and migrate to land after a few weeks. But unlike other hermits, between 15 and 26 months, they abandon these shells.

From there, they find other protection like seaweed, coconut husks, and sometimes saucepans, and eventually harden their exoskeleton to spend the rest of their lives on land. They can do this due to a special branchiostegal lung that allows them to breathe air. This adaptation is one of the most significant differences between coconut crabs and their marine brothers and sisters. 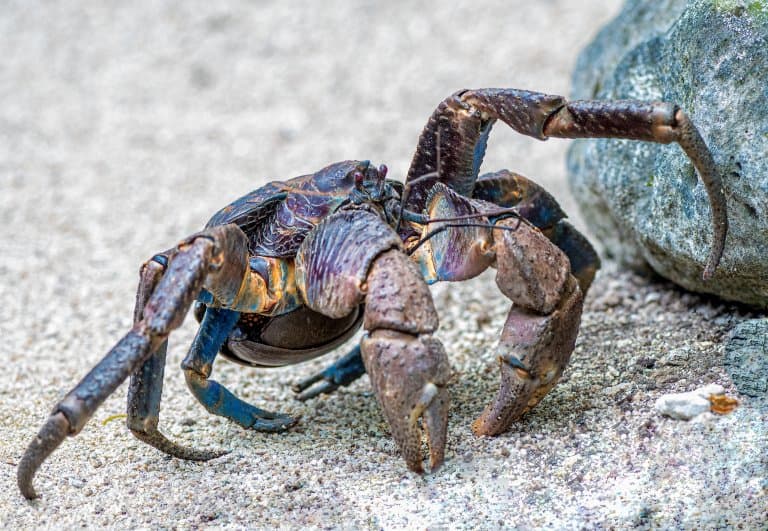 They do still have gills, but they’re more or less redundant. This means they are unable to stay in water for more than an hour or so and will drown if they’re unable to leave.

As such, reproduction is risky, as the female coconut crab needs to access the water to deposit her eggs. 1

3. They have a keen sense of smell

Another neat adaptation to being on land is their insect-like olfactory system. While crustaceans dominate the ocean, insects have taken up their domain on land, and the two groups have different responses to different environments. Smelling in water isn’t the same as smelling in air, and so the olfactory systems of crustaceans and insects tend to differ significantly.

But, a common quirk of evolution shows us that two separate lineages of animals will often come up with similar solutions to their ecological pressures. This is the case in coconut crabs: when evolving to the pressures of terrestrial life, their adaptions became very similar to the ones of insects.

The shape, the chemical mechanisms and the way the animal uses its olfactory system have all independently evolved to resemble those of insects. This is called convergent evolution and it’s one of the coolest examples of natural selection there is! 2

4. They can climb trees

This is another adaptation not typically found in marine animals. Coconut crabs have specialised limbs that are curved and clawed, with an inward grip that not only allows them to hold onto coconuts but is strong enough to scale tall palm trees to get at them. 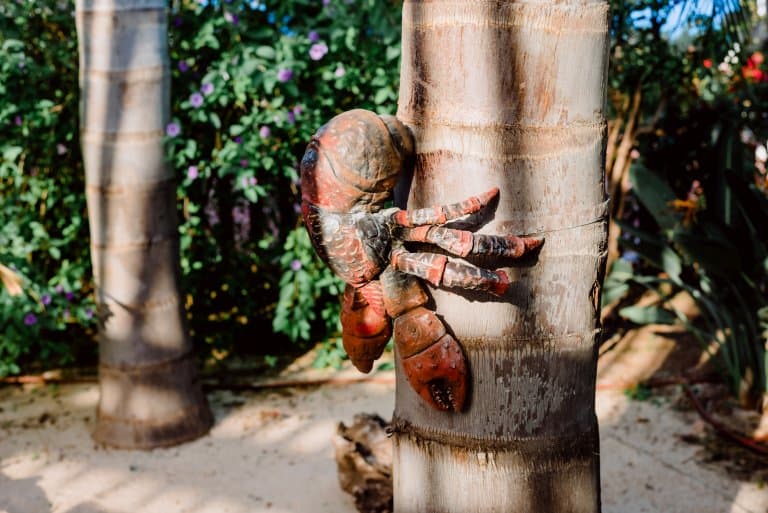 While they’re up the tree, they’re known for dropping coconuts from a height. They then drop down themselves, strong enough to survive a 5-meter fall, and set to work cracking open the coconuts with their powerful claws to get to the flesh.

They don’t just use the flesh, either. The shells are sometimes used as protection and the fibres of the husk as bedding in their burrows.

While known for their penchant for coconuts, these crabs aren’t averse to shopping around. Other common food sources include rats and birds, both of which have been seen succumbing to the stealthy lethality of a nocturnal crab attack.

Many of these animals are taken from their nests, or ambushed from the burrow of the crab as it sits in wait. 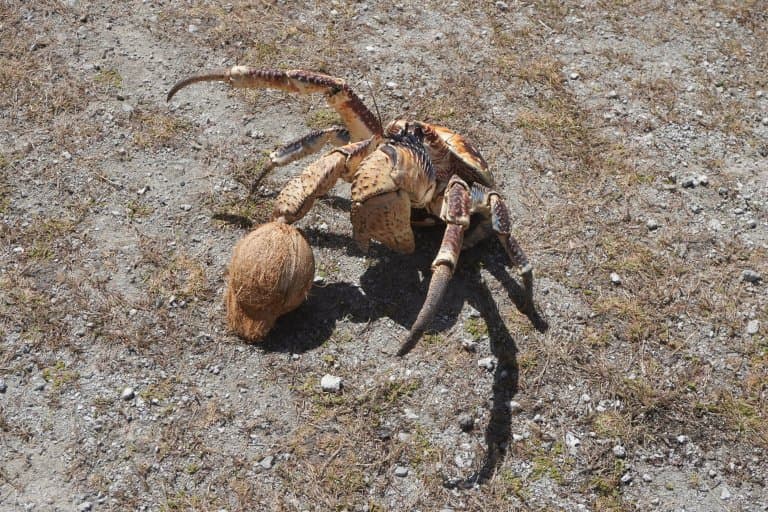 It’s been said that robber crabs will often hold onto a person and not let go. And not in the ‘90s boy band sense; rather, in the sense that all of a sudden you’ve got a 5kg crustacean with a bench press of 30kg and a grip strength powerful enough to crack coconuts hanging off your thumb for hours.

They say the best way to escape this vice-like grip is to tickle the soft underside of the crab, which apparently inspires it to let go. 3

Coconut crabs are strong, hard, and capable of growing to impressive proportions. Some local islanders believe these characteristics to be transmissible, and have consequently set to work hunting them to dangerous levels.

Coconut crab global populations are on the decline, and it’s difficult to stop. Telling an impoverished nation to stop harvesting one of their staple food sources is a bit of a hard job, so it seems that a better solution would be to start up some breeding programs to ensure that there are enough crabs to go around. 4

These cheeky crustaceans have a habit of collecting things that don’t belong to them. They’ve been found lumbering off with saucepans, whiskey bottles, shoes, watches, and plenty of other items, leading to their nickname “robber crabs”.

They probably do this because they don’t know if something is edible before they taste it, and due to local competition for food, they want to scurry off with an item to identify it in secret to avoid having to fight off other crabs. 5 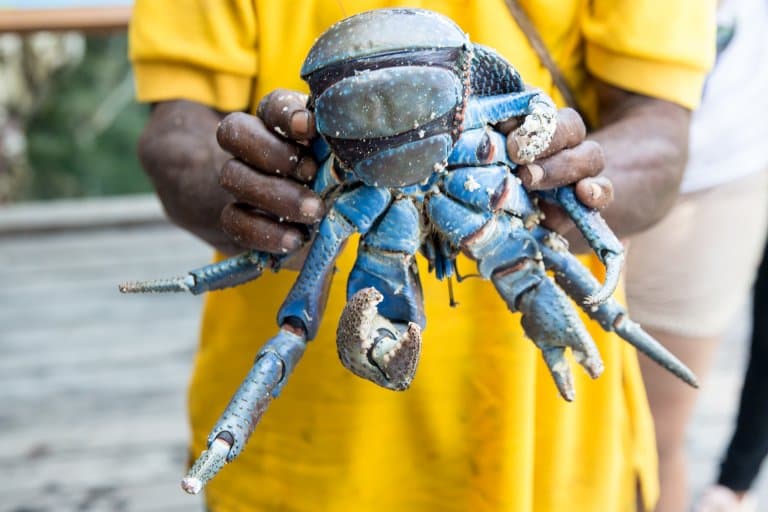 The mystery of what happened to Amelia Earhart, the famed pilot who disappeared when trying to span the globe in her plane, has brought up the theory that she survived the crash only to be stranded on a remote island in the Pacific.

From there, it’s a bit of a mystery, but the discovery of a handful of bones and some women’s personal items on the island this has led to some people painting a gruesome picture of a lost woman being devoured by coconut crabs. There are plenty of credible critics of the theory, and as yet, there’s not enough to go on, but it does work as a campfire story, at least.