The caracal is a medium-sized, slender member of the cat family found across Africa and Central and Southwestern Asia. These strongly built felines have tan to brick red coats, distinctive tufted ears and long legs, especially their hindquarters.

They have relatively short, flat faces with dark markings above their eyes and cheeks. Their large, dark tipped and tufted ears give caracals a rather regal appearance.

Caracals are found in many different habitats, but usually prefer areas that have both tree cover and open savannah. They are adaptable cats however and can tolerate ragged mountains ranges as well as open, arid bushland. 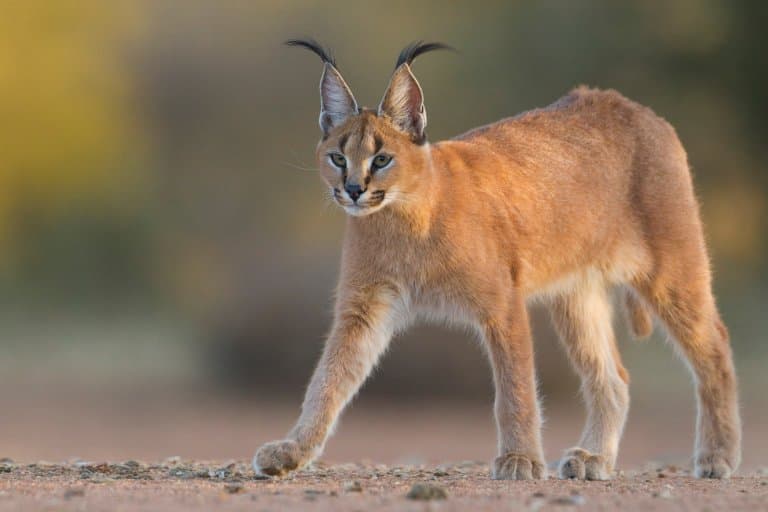 Caracals are tremendously agile and strong hunters and similarly to most cats, are purely carnivorous, feeding on mammals, birds and reptiles.

They have well developed hindquarters which gives them excellent acceleration when chasing prey as well as being able to jump large distances either vertically or horizontally. They are also fearless predators and are able to catch prey much larger than themselves and have even been observed chasing larger predators away from their kills.

Caracals are mostly solitary animals, adults only coming together during the breeding season. They have large home ranges for animals of their size and males will actively defend these territories from other males. They are however shy animals and are more active during the night than at day. This behaviour can change though, especially when prey is more abundant during daylight hours and the area is relatively undisturbed by humans.

When out searching for prey, caracals move in near silence due to their well-padded paws, not giving away their presence to potential prey or predators. Though extremely agile and quick, caracals are unable to run at a fast pace for long distances and use stealth as their main method of catching prey.

When hunting smaller mammals such as rats, rabbits or rock hyraxes, caracals will stalk as close as possible to the prey and leap at the unsuspecting victim with incredibly rapid reflexes. These cats are generally opportunistic hunters and if suitable prey is detected they will pursue it, even if that prey is much larger than themselves. Caracals have been recorded successfully hunting monkeys and jackals as well as adult impala and young kudu.

Caracals breed throughout the year, but litters are more common in the rainy seasons, when prey is more abundant. They produce between 1 and 4 kittens, though 2 kittens is most common. The female builds a nest of hair and dry grass usually in an abandoned burrow, in between rock crevices or tree hollows. The male plays little to no role in caring for his offspring and the mother will provide all the care for the kittens until they reach maturity at around 8 months old. At this time the young caracals will become fully independent and leave to establish a territory of their own.

Caracals are relatively common across their range in sub-Saharan Africa, but less so in North Africa and Asia. Though they are well skilled hunters, they do prefer less disturbed areas in which to inhabit and therefore habitat destruction greatly affects their ability to survive in that area.

Where caracals are abundant and livestock are present, they are known to become particularly destructive pests, killing sheep, chickens, and goats with much ease. In these instances their numbers are controlled to reduce livestock predation. Despite these occurrences, caracal play a vital role in reducing over-abundant prey numbers and thus are indicators of a healthy environment. 1

Caracal is thought to come from the Turkish name ‘Karrah-kulak’, which means ‘cat with black ears’. 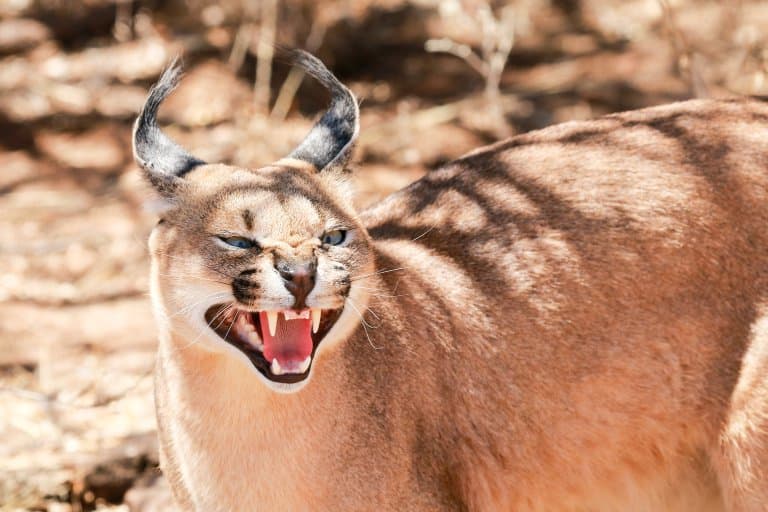 2. They are often confused with lynx

This is because they both have tufted ears, or ‘lynx tips’. However, the lynx has a spotted or blotched coat, whereas carcal do not.

Though they spend most of their time on the ground, caracals are able to climb trees with ease, especially when hunting nesting birds. 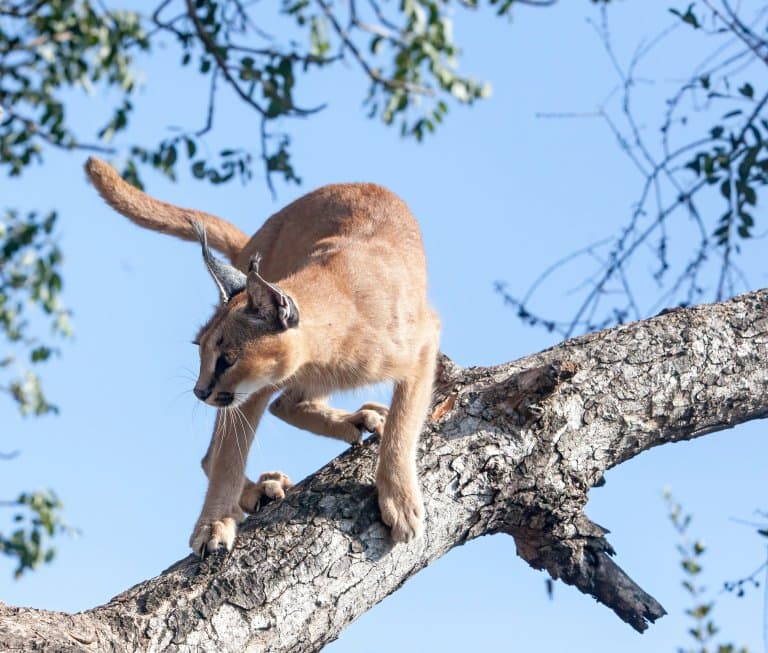 4. They have 20 separate muscles in their ears

Caracal ears are particularly well-muscled and they are able to move in many directions to sense prey as well as communicate to other caracals.

This allows them to move and tilt their ears independently to adjust them to listen to sound waves from their prey. Humans in comparison have just 6 muscles in their ears.

Caracals are also excellent bird hunters and due to their powerful legs, are able to jump up to 3m in the air to pull birds out of the air.

6. Occasionally caracals can catch more than one bird in a single leap

When sprinting into the air to grab escaping birds, caracals sometimes catch more than one bird in each of their front paws.

7. They gave rise to the expression ‘to put the cat among the pigeons’

The caracal was used by ancient Indian cultures where they were released in arenas with flocks of pigeons and people would bet on which caracal would catch and kill the highest number of pigeons.

8. Caracals are clean and efficient hunters

Like most cats, caracals often kill smaller prey with a single bite to the back of the neck. Meat from larger prey is cleanly sheared off, leaving the skin and intestines for other scavengers to feed on.

9. In Asia, caracals were once kept as trained pets for hunting

Due to their amazing physical prowess, caracals were once trained by people to hunt birds and rabbits known as ‘coursing’.

10. Caracals scent mark their territory to communicate their presence to other caracals

Caracals have scent glands which mix with urine to create scent marks.

Caracal kittens begin to explore outside their den only a few weeks after they are born.

They chase insects and lizards, learning hunting techniques that they will require when they become fully independent. 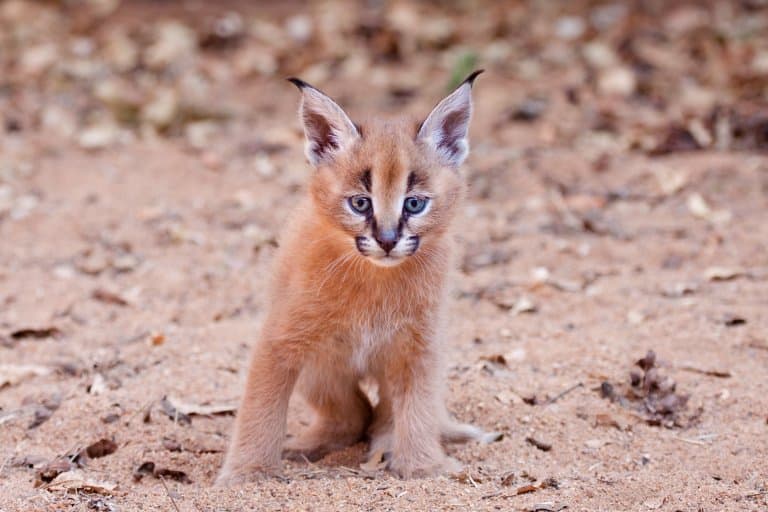 12. Caracals will cover a large kill with soil

Although capable of carrying caught prey into trees to cache it, caracals most often scrape dirt over larger kills and return to feed on it later.

13. Caracals are well camouflaged in amongst dry grass and vegetation

Their brown to red coloured coats blend in perfectly with the caracals’ surroundings, allowing them to sneak up and stalk prey.

14. The oldest recorded caracal was over 20 years old

Though wild caracals only live for around 12 years, a pet caracal was recorded to live for over 20 years.

Though far more abundant across their range, caracals are often found in similar habitats to cheetah. 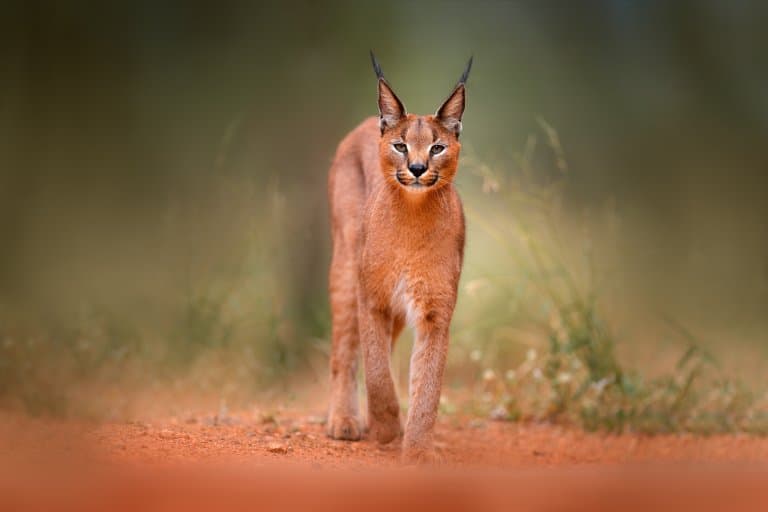 16. Caracals do not tend to compete for food with predators of similar size

A similar cat to the caracal is the serval. This spotted feline also has long legs and is an excellent hunter. However servals specialise in hunting rodents and prefer wetter areas where rats and mice are more common. Therefore these two cats share similar habitats but do not compete with one another for prey, having their own niches.

17. They were tamed in ancient Egypt

The caracal can be seen in Egyptian paintings and they are used in sculptures to guard over the tombs of the pharaohs and protection in the afterlife.

Ancient Egyptians revered cats of all kinds and honored them in their art. Caracals are believed to have been tamed for Royalty and used in hunting game birds. 3