Sometimes it’s easy to take for granted the relative peace and safety we live in.

Even in the roughest parts of town, you’re unlikely to be suddenly dragged underground by an explosive, snapping worm and consumed alive.

The same cannot be said for a lot of fish species forced to share their space with the bobbit worm.

This terrifying creature represents every reason we left the oceans in the first place and took our chances on land instead. 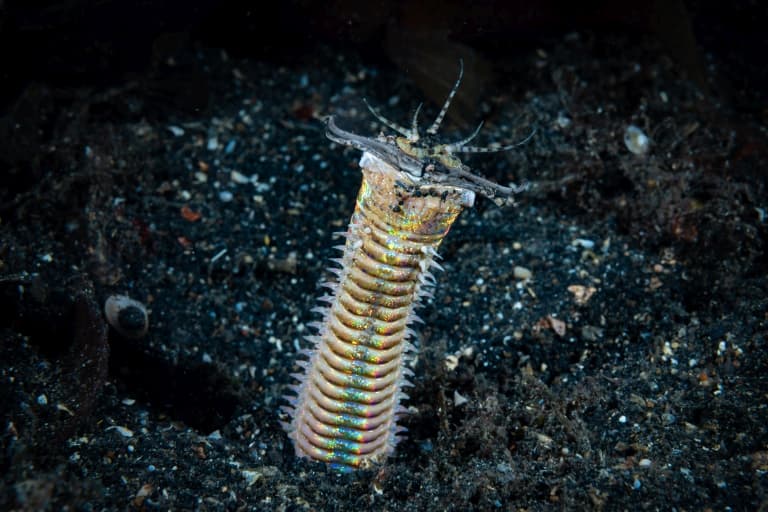 With a name like Eunice aphroditois, you’d be more likely expecting a dorky Greek lover to show up, rather than a snap-jawed Graboid in a snot tube.

The bobbit worm is a bristle worm that inhabits warm marine waters in the Atlantic Ocean and Indo-Pacific. They can be found in coral reefs, in sandy and muddy sea beds.

They are an ambush-predator and will burrow itself into the ocean floor and use it’s antennae to detect prey, where it will strike and drag them into the burrow. They like to eat smash fish and crustaceans, but will also diet on the odd plant.

These worms are quite horrifying, and their creepiness is compounded by a lack of information about their behaviour and ecology.

What mysteries are these animals hiding? Why do fish hate them? What happens when you chop them up? Let’s find out!

Bobbit worms hunt by burying all but the first couple of centimetres of their bodies in the sand and leaving a powerful set of snapping jaws and some motion-detecting bristles behind.

Like a bear trap, these jaws are triggered by passing prey, at which point the worm explodes out of the burrow and clamps down.

It’s thought that they then inject a toxin into the prey to incapacitate it for safety, but this is as yet unconfirmed. In many cases, it wouldn’t be necessary, as the force of the attack is enough to entirely bifurcate its victim.

What use are eyes when you spend most of your life burrowed deep in sand waiting to pounce on prey? Incredibly, they have been found as deep as up to 95m below the ocean bed.

Instead of eyes, the bobbit worm use five antennae on their head to sense prey.

This might not sound like a comfortable abode if you’re a terrestrial, duvet-loving mammal, but the bobbit worm is not.

It’s actually a relative of the common earthworm, an Annelid, and so slime and burrowing are its forte.

These burrows have been found in the fossil record dating back 20 million years, so it does seem that these raptorial worms have been at it for a while. Despite this, we still don’t know a lot about them. 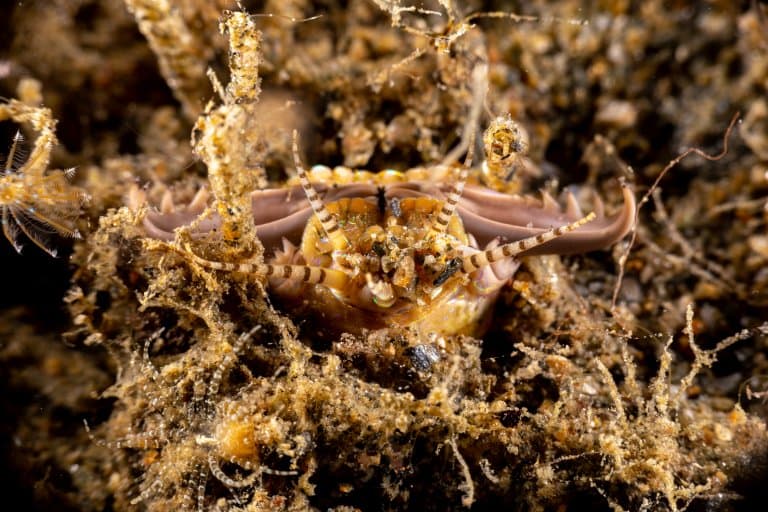 Like other species of worm, Bobbits have bristles all down the length of their bodies that help secure them in the substrate.

These bristles are attached to muscles that allow the worm to bury itself when digging, and hold its body in place as it lunges with its jaws to grab prey.

5. They can survive being cut in half

You might think that splitting this worm with a sea shovel would put a stop to it, but it’s been shown that these worms can regenerate entire clones of themselves from detached segments.

While this was a common myth attributed to earthworms (if you split an earthworm you’re very likely to kill it), some worms are capable of reproducing this way, and the Bobbit appears to be one example.

A specimen in Surry was cut into three pieces, and while the terminal piece died, the two major segments survived and became individual worms. This form of asexual reproduction is called binary fission. 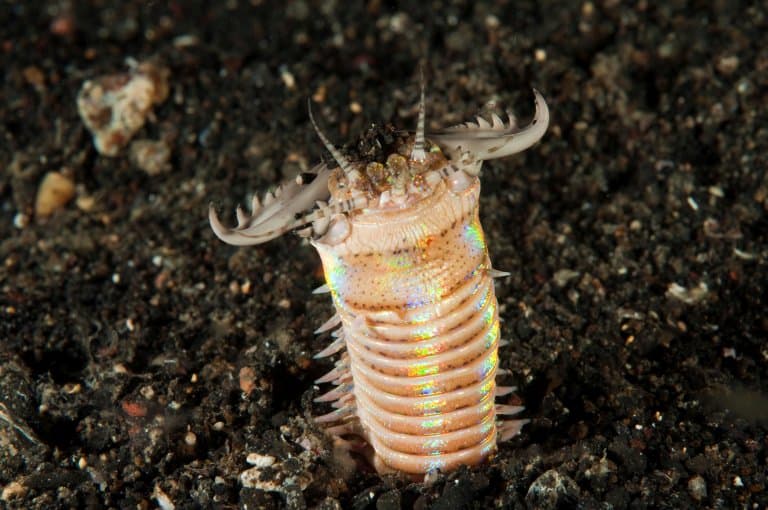 6. This is one of the longest polychaete worms

This relatively recent discovery is still in a state of taxonomic uncertainty (and, since it’s a worm, expect this to remain the case forever). One thing’s for certain though, it is a polychaete worm, and it’s a really long one. Polychaetes are one of the most diverse and abundant of all the invertebrate groups, so holding a record in this category is no mean feat!

A longer polychaete exists in a museum in Australia (of course) at 6 meters long. However, for annelids, the record is even more impressive: found in an earthworm called Amynthas mekongianus, which measured 6.7m (22ft) long.

Incidentally, the longest animal ever recorded is also a worm. The aptly-named Lineus longissimus is a type of ribbon worm, more than 55 meters (180ft) in length. 1

7. They are victims of mob justice

Much like many predators, bobbit worms are reasonably unpopular among their neighbours. When fish of the species Scolopsis affinis are off on their daily forage, they have a particular way of managing the bobbit worm threat.

When out and about, they blast the sandy seabed with water jets. If a bobbit worm is found, other individuals have been seen joining forces to bombard the worm with attacks. They do this by directing jets of water in the worm’s direction, which the worm finds unpleasant. As the bobbit retreats into its burrow, it leaves the foraging area secure for the fish.

In cases where one of the fish is taken by a bobbit worm, mobbing behaviour like this can kick off suddenly, as the fish hurriedly bombard the worm in a frenzy of jets. In some cases, other species of fish join the attack and it becomes very clear that the behaviour of the worm has been deemed unacceptable. 2 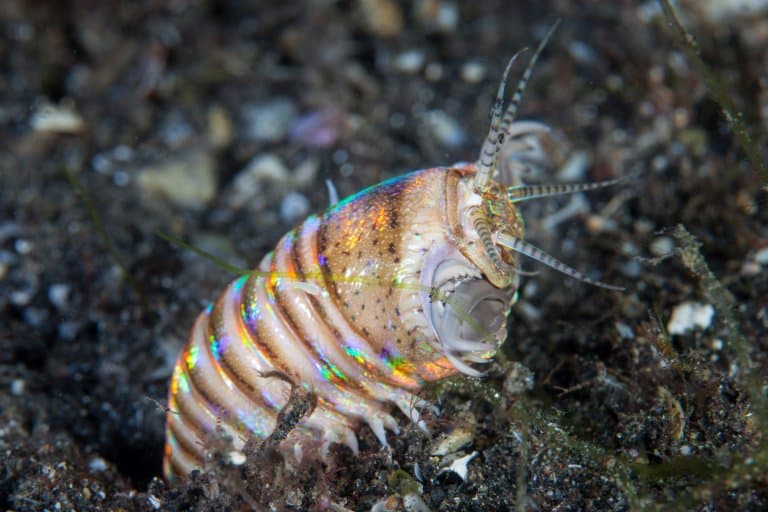 This isn’t entirely true, but instead of a typical brain, they have a nerve cell cluster called a ganglion located in the species’ autonomic nervous system.

9. Their name comes from the Bobbitt family ‘incident’

While they are sometimes called the ‘sand-stalker’, their more common name ‘bobbit worm’ is inspired by Lorena Bobbitt, who famously sliced off her husband’s genitalia while he was sleeping.

The jaws of the bobbit worm are said to resemble the said cutting action, as well as their shape resembling said member that was cut off!

Fortunately for the husband his member was surgically reattached and went on to perform just fine in various adult movies later in his life.

While the name has been widely attributed to Eunice aphroditois, even experts in the genus can’t seem to agree on the true identity of this animal.

As mentioned, taxonomy commonly amounts to the scientific equivalent of “my dad’s bigger than your dad” and the contradictions are endless and often impossible to substantiate.

Even the common name has some researchers bristling, though this seems to be a meaningless distraction as there’s no such thing as a worm anyway. Besides, if pedantry so insists, arguing over the legitimacy of the name “Bobbit” should surely come after we get our heads around the confusion that is ladybird or butterfly. 4