The black widow spider is an arachnid that strikes fear into the hearts of many.

They can be found on almost every continent (with the exception of Antarctica) and like to reside in areas that are warm, dark, and secluded.

They were dubbed “widows” because of the tendency of females to eat their mates. 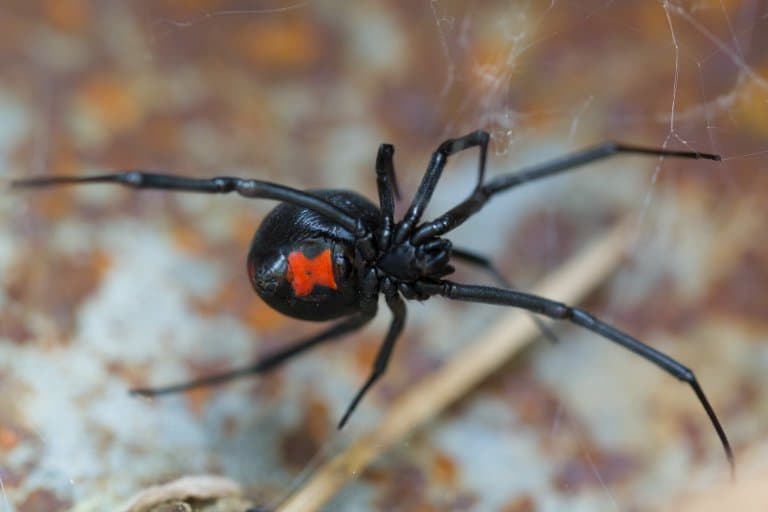 Like all spiders, black widows have eight legs, but what sets them apart is the distinctive red spot on their bodies. This famous marking does not develop until adulthood as spiderlings are usually white or orange.

Females are often twice as large as males that generally have longer legs but smaller bodies. In their juvenile stages, both sexes are harmless to humans.

Female widow spiders contain potent venom, which is dangerous to animals and humans. While potentially harmful, their bites rarely cause death or produce serious complications.

Their reputation is fierce, but actually they are not aggressive and generally reclusive. They will only bite when threatened.

1. Their venom is 15 times more potent than a rattlesnake’s

Bites can induce nausea, paralysis of the diaphragm, and muscle aches and pains. Fortunately, it is quite rare to die from a black widow bite. 1

2. They wait patiently for their prey

Prey will find their way into the webs and become entangled in its threads. The spider, which is usually hanging upside down, will then inject its poison into the victim, paralyzing them before they are consumed. 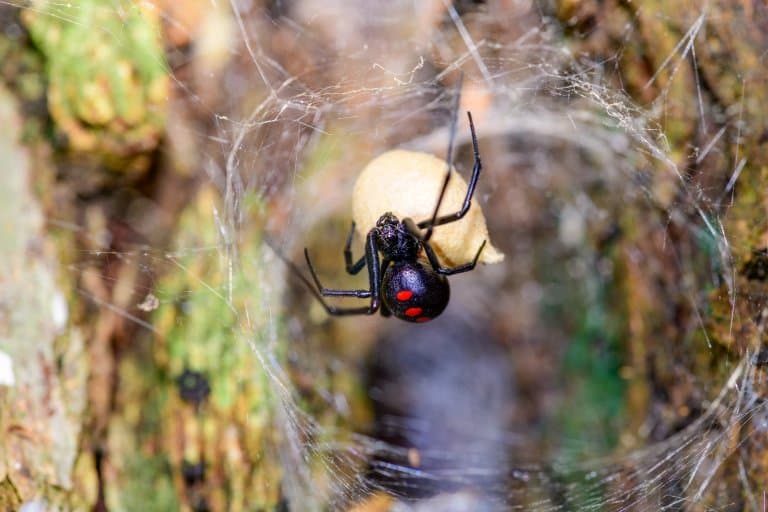 Each year, there are approximately 2,500 people who seek medical attention for black widow spider bites. There exists an antivenom that is produced by injecting horses with minute amounts of venom.

Antibodies against the venom are developed by the horses’ immune systems and pharmaceutical companies can extract them to be used in human patients. 2

4. Males are sometimes eaten after mating

For male widow spiders, mating can be extremely dangerous.

Female widow spiders are larger and stronger than males, and following copulation, females will occasionally catch and consume males for energy.

5. They are solitary arthropods

Black widow spiders generally only come together to mate.

Afterwards, they will part ways (assuming the male is not eaten) and the female will lay her eggs. 3

6. Black widow spiders use their webs for more than catching prey

In addition to trapping insects, females also use their webs to store their eggs in a cocoon.

Hundreds of eggs (between 250—750) are laid and, about 30 days later, spiderlings will hatch and leave immediately after. 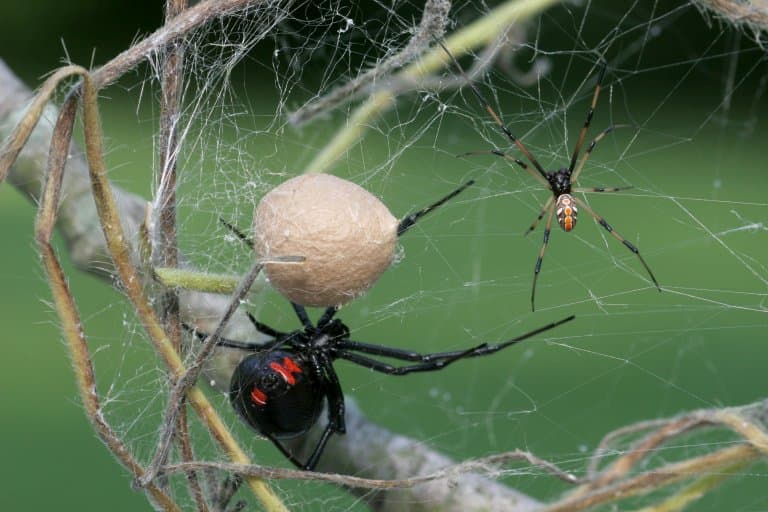 These spiders belong to the Theridiidae family, a group known as “comb-footed spiders”.

They are so named because all members of the family possess legs with short hairs on them that look like the teeth of a comb. These hairs help spiders swathe their victims in webbing. 4

8. They liquefy their prey

Black widow spiders will bite their victims and use their venom to immobilize them. At the same time, they inject digestive enzymes that liquefy their prey into a fluid that the spider then drinks.

9. Their red marking is a warning sign to predators

The characteristic red hourglass-shaped design on female black widows reminds predators to stay away. While their venom cannot kill a bird, it can trigger severe nausea and sickness when consumed. 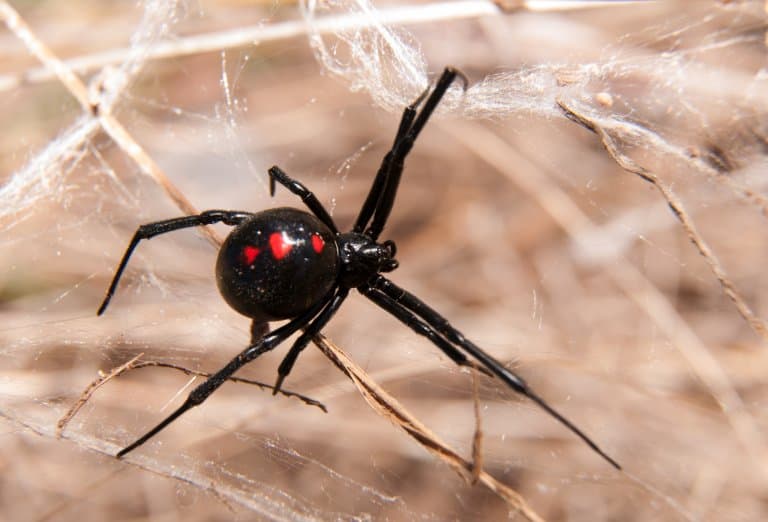 10. They will eat their siblings

It has been reported that, when there is a notable difference in size, larger spiderlings will cannibalize smaller ones once hatched.

Interestingly, if hatchlings are similar in size, this practice tends to occur less frequently.

11. They are not aggressive

Contrary to popular belief, black widow spiders are not aggressive.

Females will usually only bite when they feel threatened or if one approaches its web that contains eggs. Males are even more reclusive and are rarely sighted.

12. Their eyesight is poor

Despite having eight eyes (arranged in two rows of four), black widow spiders do not have good eyesight.

Rather, they are sensitive to air currents and vibrations carried through the strands of their webs.

A well-made web is a sign of strength and reproductive fitness. There have been reports of male widows destroying sections of webs to prevent other males from approaching. 5

14. Their webs have specialized areas

Generally, the top area is strong and composed of supporting threads that anchor the web in place. Webs engineered for trapping prey are closing to the bottom portion of the web. 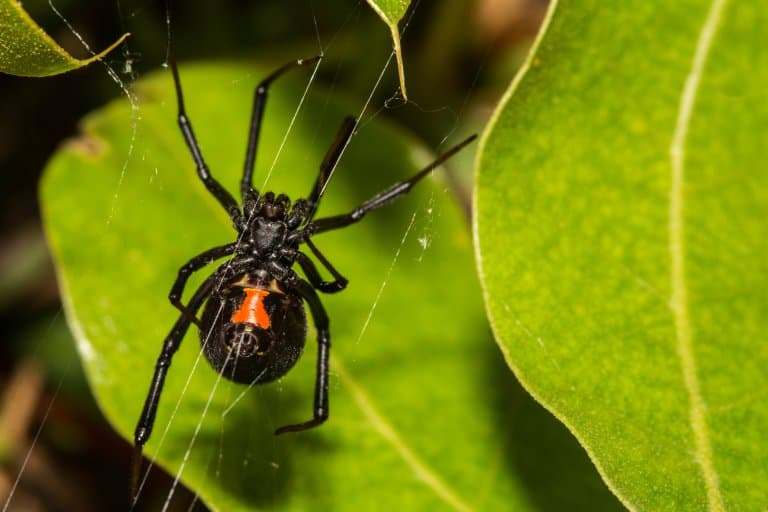 15. There are false widow spiders too

These are spiders from the genus Steatoda, who often get mistaken for black widow spiders.

While their bites can be painful, they are not really harmful to humans.

Compared to a couple of decades ago, black widow spiders are now being found in areas that they previously did not occupy.

Some are proposing this transition has to do with changing climates and temperature rises. Good news, right?! 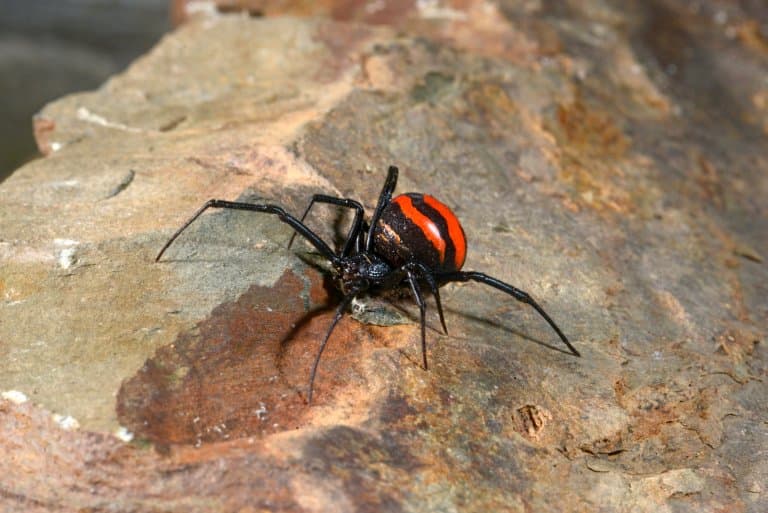