Of all the giant African mammals that roamed the plains, a mere handful remain.

The iconic Loxodonta elephants, the bizarre and elongated giraffes, and the quietly declining black and white rhinos. Of the two, the black rhino is significantly more threatened with extinction.

The black rhino is one of five species of rhinoceros still living today that are native to Eastern and Southern Africa. 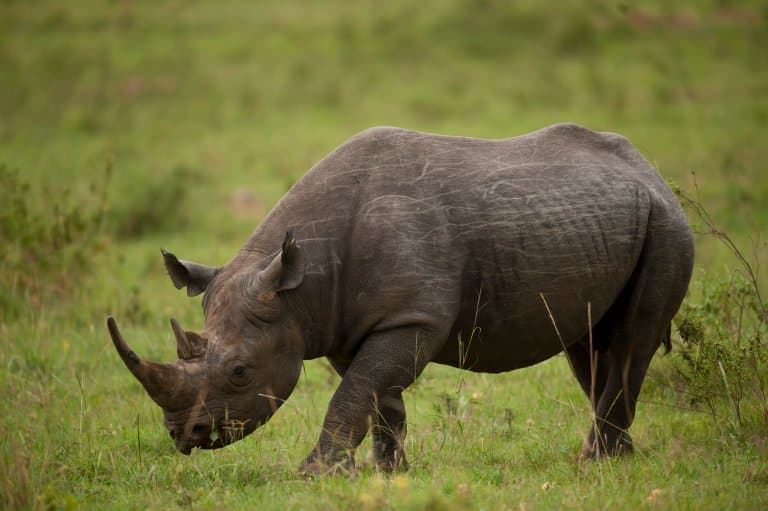 Black rhinos are cute and playful when they want to be, but they can pack a serious punch. Sadly, they’re hard to find nowadays, on account of being hunted almost to near extinction for their protective horn.

The variation of black rhino is of some debate by researchers, but there’s generally accepted to be between 7-8 subspecies, with 3 sadly already extinct.

These animals diverged from their white cousins around 4 million years ago and took to browsing branches with their well-adapted lips. Black rhino are herbivorous and like to diet on over 30 species of leafy plants, as well as branches, roots and fruit.

They’re phenomenally powerful and aggressive animals and can grow to 3.8m (12.5ft) in length and weigh as much as 2,900 kg. While huge in size, the black rhino is smaller than the white rhino, which is the largest of all rhino species. They are closer in size to the Javan rhino.

A huge amount of money is being fed into their protection, but unfortunately, a whole lot more is being made on their exploitation.

Although the black rhinoceros is referred to as ‘black’, its colours actually vary from brown to grey. 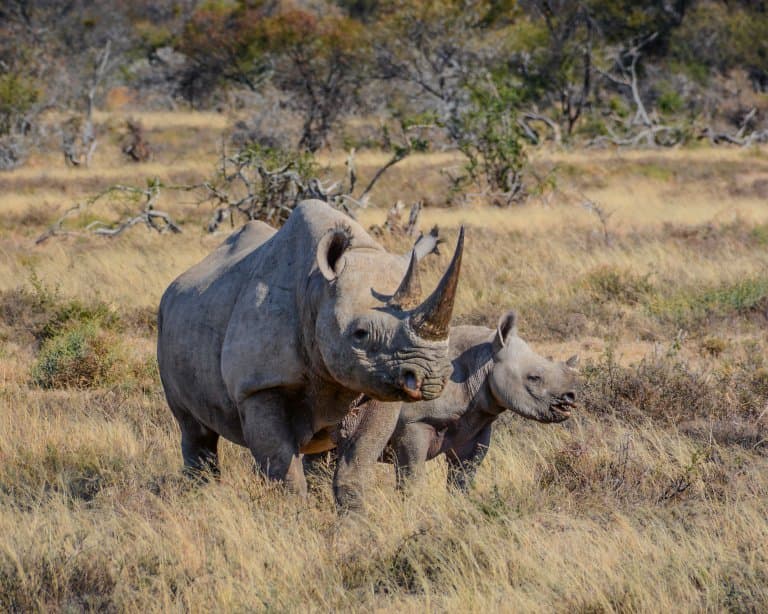 Large herbivores can be loosely separable into two types of feeding behaviour. Animals who clip grasses and forbs from the ground are grazers. The close cousin of the black rhino, the white rhino, has a wide mouth for doing just this, and its name is derived from the Afrikaans for wide.

In contrast, the black rhino has a hooked, pointed upper lip that’s really great for picking at shrubs of different heights and selecting different parts of plants to eat. This is called browsing.

3. Rhino horn is believed to be a powerful medicine used to treat fever

At least, that’s what a lot of traditional Chinese and Vietnamese healers will claim. In fact, it’s entirely false, has no scientific merit and is a dangerous and ignorant myth.

The use of rhino horn in traditional medicines is a perfect example of how alternative ‘medicine’ is a useless waste of money at best and immensely dangerous and destructive at worst.

Rhino horn is made of simple keratin – the same protein as your fingernails – and contains nothing of medicinal value. However, this has not stopped poachers from receiving $20,000 per kilo for African rhino horns. 1

The demand for rhino horn isn’t just in Vietnamese medicine. In the 20th Century, European hunters and settlers set to work wiping out rhino populations for sport.

Numbers dropped to 2,500 individuals and established the black rhino as critically endangered.

How many black rhinos are left today? Numbers are on the rise again, but with only 5,500 remaining, they’re still at great risk. 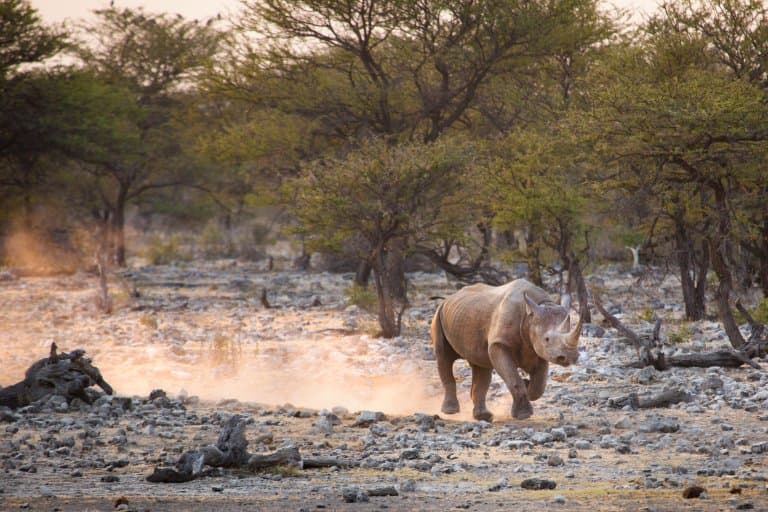 Back in the Pliocene, early hominids shared a space with sabre-toothed tigers and sloths the size of busses. Giant armadillos, mastodons, and… modern rhinos emerged around this time, as speciation between the grazing white rhino and the browsing black rhino occurred.

In the time since (around 4 million years), humans and their ancestors have spanned the globe, wiping out all mega beats they could find, and surviving those killed by climate changes.

Among the handful that was left were the rhinos.

Animals who have survived countless ecological disasters including the expansion of humanity. Only to become critically endangered soon after people invented guns.

Evolution works in a way that leaves only the most adept behind. In the case of the ancient, large mammals, only the grumpiest and most proactively violent survived human hunters, and rhinos (just like elephants) evolved alongside humans to develop this survival trait.

In most other places, where animals hadn’t evolved alongside humans, they simply weren’t dangerous enough to protect themselves, and within a few generations, they were gone.

Black rhinos have been seen charging at tree stumps and termite hills.

Rhinos are very dangerous, but with modern tracking and hunting equipment, they’re no match for a wealthy idiot or a greedy collector with a gun. 2 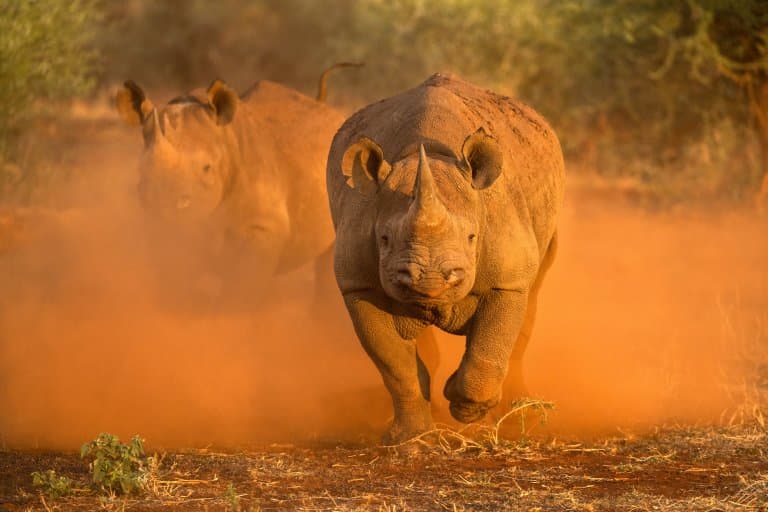 Captive rhinos, or ones who grew up around people, can be a world apart from their wild relatives.

Rhinos are surprisingly emotionally intelligent and curious for a solitary animal, and baby rhinos will play and practice charging to the point of mischief.

The front horn of the black rhino which is the larger of their two horns averages around 50cms, but some particularly large bulls can have much longer horns.

Sometimes a third larger horn can also grow. Their horns are used in fighting, breaking up branches when browsing for food, or digging up roots.

9. They can still be saved

The tragic irony of rhino decline is twofold: the very adaptation that protected the rhino for so long has become the source of its demise; and further, if the horn’s medicinal value held any merit, its active components could have long since been synthesised in sustainable ways, reducing both the price and the demand of the raw product.

The WWF, among other organizations, is making a good effort to protect the species. A mixture of community support, anti-poaching groups, translocation projects, protective habitat programs, and dehorning programs have aided the black rhino in its recovery.

Dehorning involves tranquillizing a rhino and painlessly removing its horn so that it is no longer a target of poaching. The horn is destroyed and the rhino is released, unharmed.

This is a costly and temporary measure and a desperate one that will not solve the underlying problem, but it has demonstrably helped reduce poaching. 3

10. Horn removal may even save more rhinos

Horns are important to rhinos. They’re clearly used for defence, and possibly mating, but when black rhinos fight one another, they have the highest rates of fatal injuries of any mammal.

These formidable beasts are so dangerous to one another that half of all males will eventually succumb to injuries from fighting, and almost a third of females.

These stats are somewhat skewed by the fact that there isn’t much else (other than humans) that can kill them. Still, it’s a scary and violent world to live in for the black rhino. 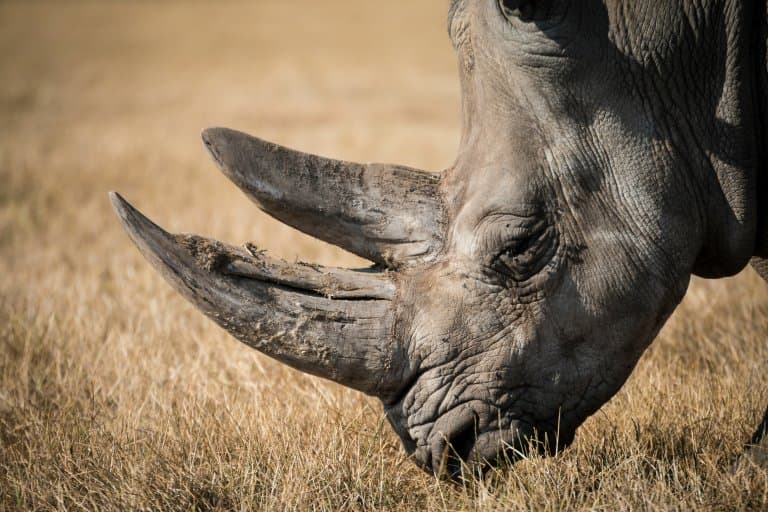