Once a revered spiritual guide to both European and North American native tribes, the majestic bison represented strength, and security and was a staple of culture and diet.

Sadly, now, most species are extinct, and the two that remain are clawing their way back into our culture. Often confused with buffalo, these bovids are distinctly separate from their African and Asian counterparts. They are large, wild hooved ox, most closely related to yaks. 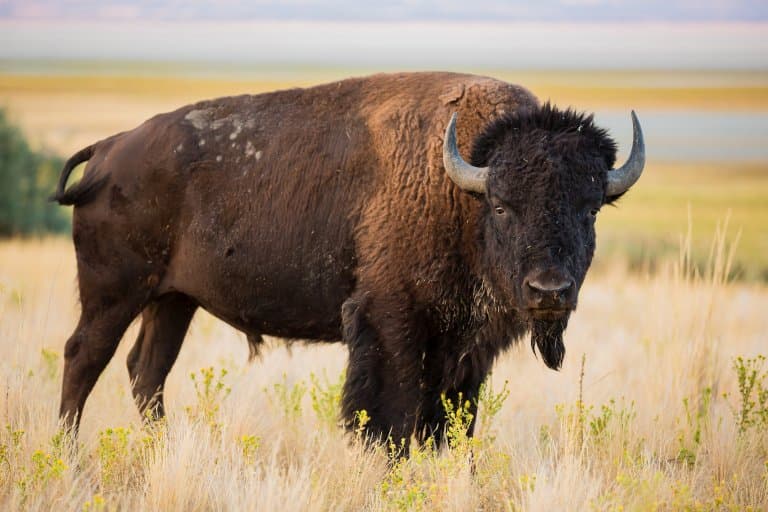 There used to be many more species and these remaining two are all that remains of an animal that was once ubiquitous to our ancient ancestors.

Bison are ruminants (similar to cattle, goats, sheep, giraffe and deer), which means they are able to ferment plants in a specialized stomach prior to digesting them.

Thankfully, their populations are on the rebound, and there are now bison in areas you may not expect. These powerful and enigmatic beasts have some serious resilience and may soon be back to healthy population levels in their once-native lands.

1. Bison once roamed the plains of the US in their millions

Prior to the devastation that bison populations faced by colonials in the 1890s, there were estimates of between 30 and 60 million bison on the American continent.

A combination of a boom in hunting from both native and invading human populations, an extermination program by the colonists to weaken the native peoples, and possible climatic effects, rapidly reduced the bison populations down to their hundreds.

It’s said that Yellowstone populations reached as low as 23 individuals! The fact that their populations are recovering is a testament to their resilience. 1 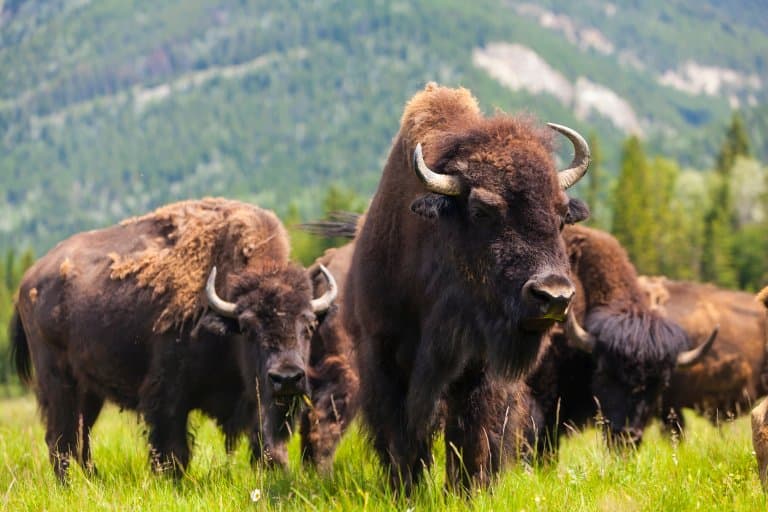 This mass destruction of the bison population created what’s known as a genetic bottleneck, in which only a small proportion of the population’s genes were preserved. This phenomenon is very dangerous to the viability (chances of reproductive success) in a population and could have spelt the extinction of the species.

There are some suggestions as to how they managed to survive; some think that the geographically distant populations reserved enough genetic diversity to come together and repopulate the species, while others suggest that hybridization efforts in the early 20th century between bison and domestic cattle may have donated some genetic material to the cause.

If the latter is true, it’s likely that there are almost no American bison around today who share a true genetic match with their ancestors on the plains over 250 years ago.

The two known exceptions to this are the Yellowstone population in the US, (now reaching around 5,000 individuals) and Elk Island in Canada, which is home to around 700 woods and plains bison.

These populations represent less than 5% of the extant individuals, meaning that their true lineage is almost wiped out. 2

3. Bison are the largest mammal in North America 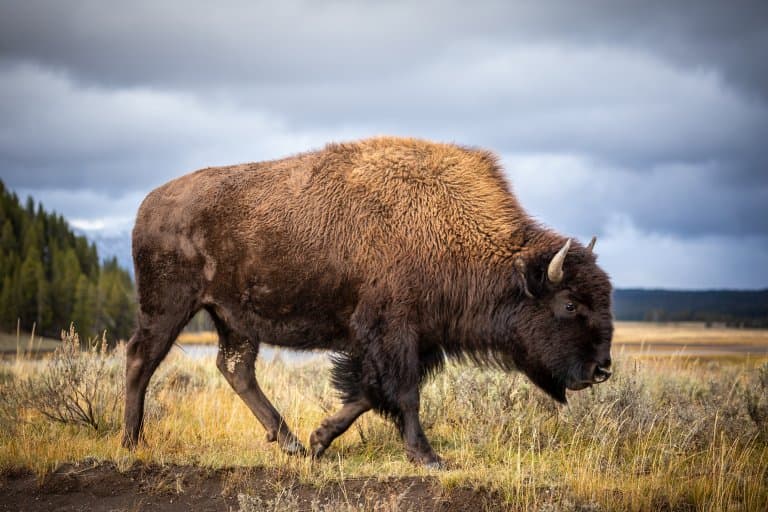 4. Their tail can help judge their mood

Bison are enormous, powerful animals, but they’re not usually aggressive. Despite the fact that they weigh a ton and have horns, they are typically unconcerned with the presence of humans.

However, it’s not a good idea to take this for granted. Bison can attack without warning or purpose, and they can be exceptionally dangerous animals when they want to be.

One sign to watch out for is it’s tail. If it hangs down, it’s usually calm, if it’s standing straight up, then beware as it may be ready to charge!

Bison can also kick with devastating consequences. Historically they had the reputation of being fearless and powerful creatures who could take on anything and anyone, and they’re known for being faster across all terrain than almost any other animal.

Their unpredictable temperament makes them an animal you should not try to get too close to.

5. There are European bison!

Many people immediately think of the US when they hear the word bison, but a lesser-known species of bison still exist to this day in central and Eastern Europe. This is the heaviest land animal in Europe, and all indications point to the fact that it used to be even bigger.

The Polish beer Żubr is named after this animal and is the common word for the bison in many Slavic languages. There have been depictions of the European bison in cave paintings, rock carvings and sculptures all across Europe and spanning tens of thousands of years; showing its cultural significance as a native animal throughout human history on the continent.

Despite this, it was hunted to extinction in the early 20th century and has only recently been reintroduced from captive breeding populations.

Since 1996 this wild population has improved in its conservation status from endangered to near-threatened, and it continues to improve. There are now close to 8,000 individuals in Europe, around half of which is on the Poland-Belarus border. 3 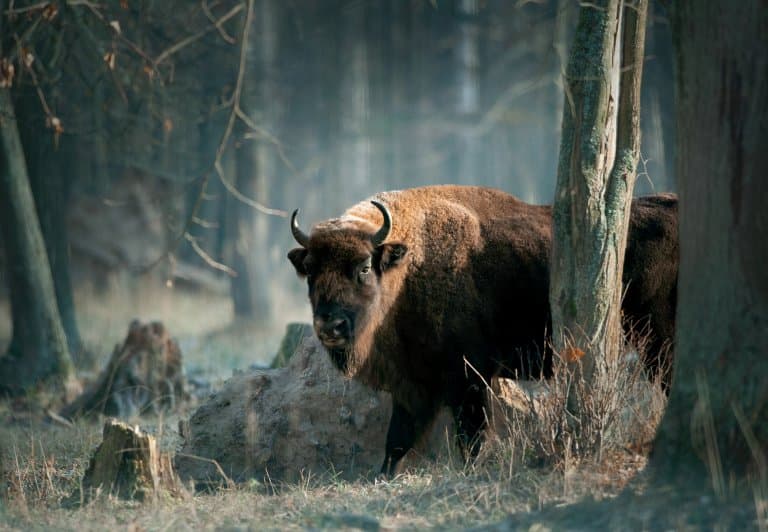 6. There are Bison in the UK

The bison population has been expanding across Europe and has made it as far West as Spain, France and the UK.

Bison in the UK are some of the most recent reintroduced populations, having been established in July 2022 in West Blean and Thorndon Woods, in Kent. 4

Both the European bison and the US variety are matriarchal in their hierarchies.

This means that the females lead the group, with daughters sticking around with their mothers as sons tend to drift off and disperse. This way of dispersing genes may have contributed somewhat to the successful recovery of the bottlenecked populations in the US, as Polygamous breeding systems have been shown to be more resilient to these genetic bottlenecks. 5

This is where they roll around in dirt in the ground. It’s thought to deter biting flies and help shed fur!

Some researchers also believe it can leave behind scent during mating season to display their strength to females and rival males.

9. They’re not Buffalo, but can be called it in America

Let’s clear one thing up. Despite commonly being called such, both species of bison are distinct from buffalo, which are a different group of bovid from Africa and Asia.

Bison and buffalo have been used interchangeably for slow long in America, the term buffalo is now considered correct as a result of being used so much in American English. The American bison is often referred to as the American buffalo.

10. The American bison is the national mammal of the United States

It was named the national mammal of the USA in 2016, joining the Bald Eagle as the official symbol of the country and one of the best conservation success stories.

This is because bison calves are born orange-red in color, earning them the nickname ‘red dogs’ in America. After a few months, their hair schanges to dark brown. 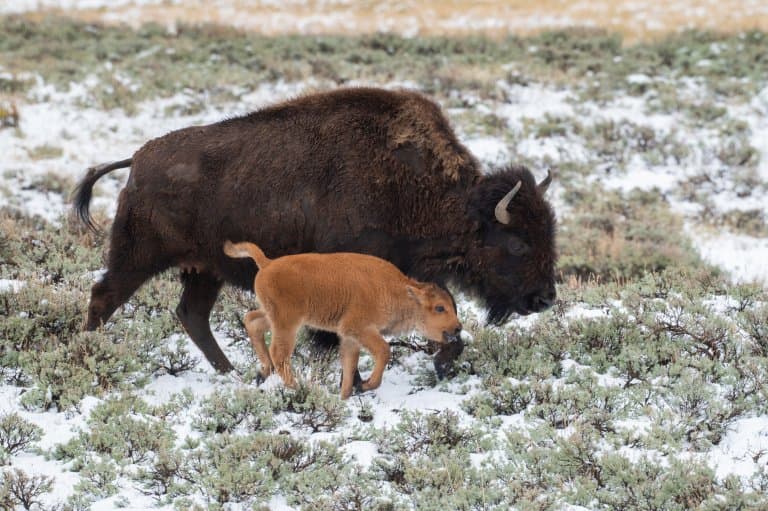 They produce offspring called beefalo or zubron. Beefalo offspring is usually from domestic male cattle and a female American bison, while a zubron is usually mated with a European bison.

Bison were highly treasured by native Americans and were a significant resource until their near extinction in the late 19th century. They were a primary food source, and used for raw materials such as clothing, teepees, bags, and tools.

Using their ingenuity, American tribes worked out how to use almost every part of the buffalo they killed – even bones would be used as tools, while horns were turned into cups and laddles.

Various parts of the bison were used in religious ceremonies as well, where they played a spiritual role in the life of natives and were hugely valued and respected. 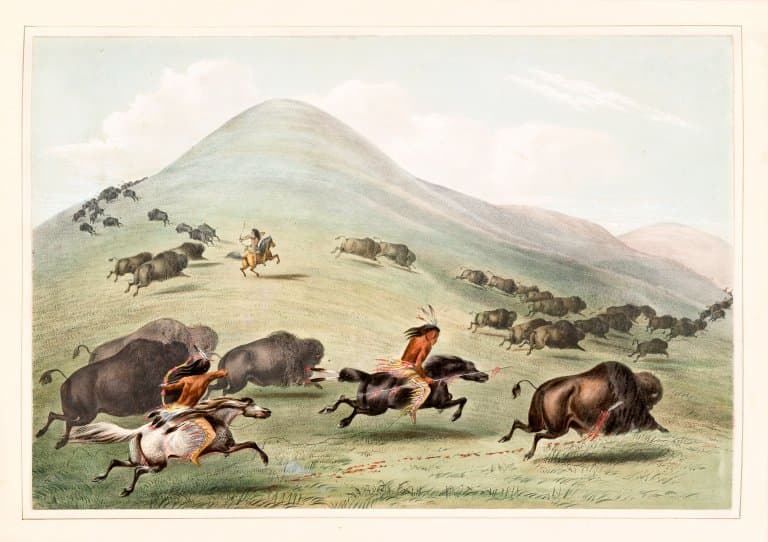