Throughout the tropical oceans of the world lurks a truly ferocious piscivore – one which has achieved worldwide notoriety for its role in Pixar’s Finding Nemo, in which it infamously gobbles up the titular character’s mother!

All but invisible until it’s too late, the barracuda or ‘cuda’ for short, is a fearsome and lightning fast fish-seeking missile, which packs a deadly arsenal of teeth. 29 species of barracuda occupy the genus Sphyraena, which belongs to the monotypic family Sphyraenidae. Sphyraena translates from Greek to ‘hammer fish’, a fitting name considering their habit of ramming directly into their prey at high speed. 1

The closest extant relatives of the barracuda are thought to be the marlin, spearfish and sailfish (Istiophoridae), and also the swordfish (Xiphiidae).

Baracuda are saltwater fish that reside close to the top of the water and near corals, which maintain their food source of fish. Adults are predominantly solitary, while younger fish are often in groups known as schools of fish.

They have a thin, snake like appearance with very sharp fang like teeth similar to a Piranha, which underbite in many species to give them an even scarier appearance.

All barracuda are stealthy, opportunistic predators which rely on short bursts of astounding speed to capture their prey. They compete with other sea creatures such as dolphins for prey.

With a slim, torpedo-like body shape and crescent-shaped tail fins, barracudas are built for short bursts of speed. They can accelerate from a standstill to their top speed of 36 miles per hour (58 kph) in a blink of an eye, closing the distance and seizing their prey before it even has time to react.

2. The Largest barracuda caught was over 6 feet in length

Thomas Gibson from the USA caught a Guinean barracuda weighing 46.40 kilograms (102 pounds 4 ounces) which measured around 2 metres (6 feet 6 inches) on 14 February 2013 in Angola.

3. They can hide in plain sight

Barracudas are countershaded; with darker colours on the top half of their bodies and lighter shades on their bellies, they are camouflaged against both the ocean below them and the surface above.

Their silvered flanks help to conceal them further, and their snake-like bodies create an extremely small profile when viewed head-on; from the point of view of their prey, the barracuda is virtually invisible as it approaches.

4. They are visual hunters

Barracudas have excellent eyesight, and are drawn to the silvery flashes and sudden movements made by their prey.

They are able to accurately track a single fast-moving fish in a school of hundreds during the chase, and land their strikes with deadly precision.

5. Some species are nocturnal specialists

Their extra-large, highly sensitive eyes allow them to see their prey clearly in the darkness, when their hapless targets are at a significant disadvantage. 2

The only real limitation to what a barracuda sees as food is size, and they are more than capable of tackling prey almost as large as themselves.

Little fish are not safe either; even if they are not worth the energy to actively hunt, barracudas will happily snap up any small fry that make the mistake of straying into the danger zone.

7. Their jaws are lethal weapons

Barracudas are equipped with powerful jaw muscles and impressive sets of specialised cutting and impaling teeth.

Their bite produces huge amounts of shearing force, and when tackling prey that is too large to swallow in one go they simply bite it in half.

8. They have a unique and efficient hunting strategy

Unlike many other piscivorous fish which rely on sudden, powerful suction to capture food, barracudas have the ability to bite right through their prey.

Their hunting strategy, fittingly known as ram-biting, allows them to tackle prey that is too large to gulp down in one go; this massively increases the amount of energy they can gain from each attack compared to suction-feeding predators of a similar size.

9. Some of their teeth are angled backwards

This prevents fish from slipping out of their mouth, allowing them to hold and bite them!

10. Barracudas have been known to attack humans

Barracudas regularly mistake scuba divers for large predators and follow them around in the hopes that they will flush out prey.

This behaviour, combined with their sensitivity to silvery flashes and quick movements, has occasionally caused the larger species to attack and even kill human divers, especially in water with lower visibility. 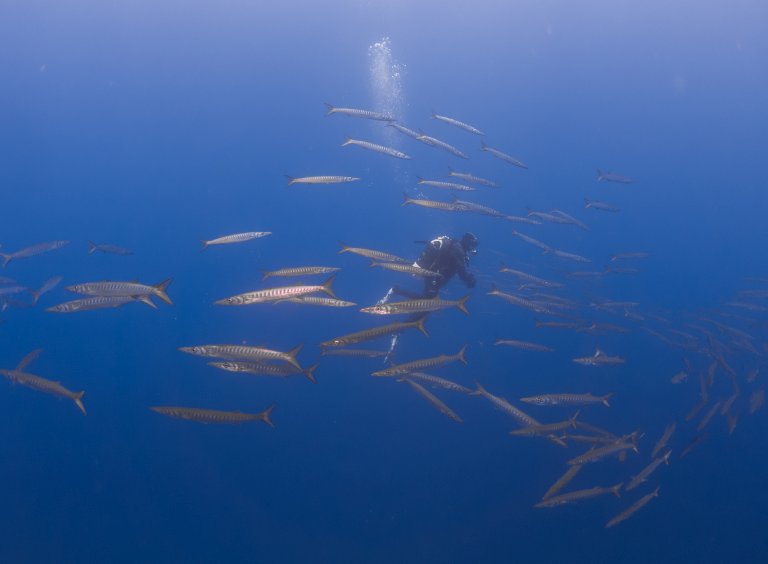 11. Each barracuda has unique patterning

Scientists are able to identify and track individual barracudas from their complex patterning, which much like human fingerprints differs between each individual.

This technique allows them to repeatedly monitor the same individuals, while causing minimal disturbance compared with more invasive tracking methods like GPS tagging.

12. They can be poisonous to humans

People around the world regularly catch and eat barracuda, but larger species are not safe for human consumption because their bodies collect toxins from their prey in a process called bioaccumulation.

They are known to contain high concentrations of ciguatoxins – naturally occurring compounds manufactured by algae – but also large amounts of heavy metals, a large proportion of which are released into the ocean by humans. 3

13. Their range is expanding

Rising ocean temperatures have allowed many tropical species, including barracuda, to expand their natural range.

This could have severe implications for species that until now have not had to deal with predation by barracuda, as well as for other predators that find themselves in competition with the voracious new arrivals. 4

14. Barracuda are hunted for fun, and food

Barracuda are popular as game fish for sport, where fisherman catch them for fun. They are also eaten as fillets or steaks close to regions they habitat.