The bald eagle is a species of sea eagle native to North America. It is the National Bird of the United States and has featured on a variety of official seals and national documents since 1782.

The bald eagle is the second largest flying bird found in North America, with only the California Condor having a larger wingspan. This beautiful bird of prey is not in fact bald, but has a distinctive white, feathered head. 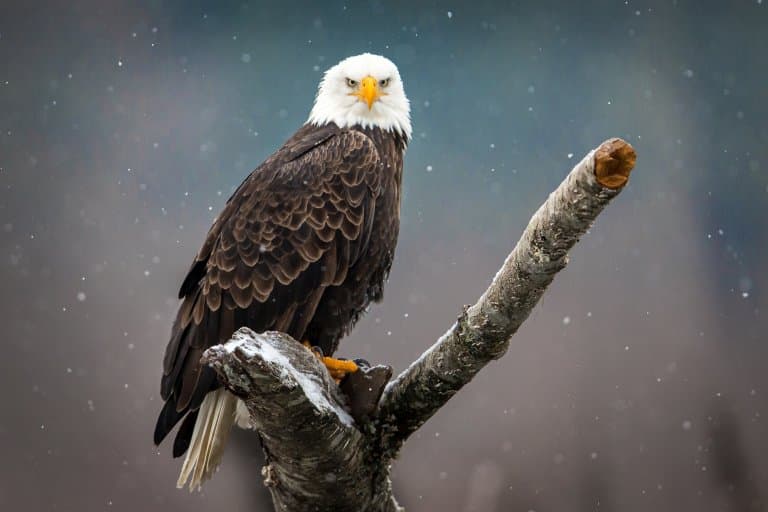 Their are 2 subspecies of bald eagle, H. l. leucocephalus which is found in southern USA, and H. l. washingtoniensis which is larger and found in northern USA, Canada and Alaska.

Bald eagles prefer habitats that are undisturbed by humans and they are rarely found more than a few kilometres away from water. Their preferred food choice are fish, hence their preference for occupying areas with large bodies of water. Due to their large size, bald eagles require tall trees with thick canopies in order to nest and roost, but are occasionally found nesting on cliffs, smaller tree species and even on the ground.

Though they are strong fliers, bald eagles prefer to soar where possible, using slow but powerful wing beats that allow them to cover larger distances while expending less energy. They generally only migrate to areas where food is more abundant but in colder climates, such as Canada, they will migrate south to avoid the coldest seasons.

Bald eagles are monogamous and mate for life, with both parents sharing parental duties when looking after their offspring. Having found a suitable nest, they will continue to use that same one for years on end and perform elaborate mating displays to reinforce the bond between the mating pair.

Adult females are generally larger than males, but both share similar colouration; a dark-brown to almost black plumage, with a white head and bright yellow eyes, bill and feet. Their large size allows for a more opportunistic diet, being able to prey upon mammals and other birds when the chance arises. However, bald eagles show a definite preference for fish and will time their arrival at feeding spots with the spawning of salmon and other fish.

Their large, strong wings mean they are able to dive at high speeds and their sharp, strong talons are ideal for clutching fish out of the water. They will also tail other fish-eating birds and will harass them until the fish is dropped or even steal the fish directly from the smaller bird.

Though juveniles are relatively solitary, bald eagles are commonly found in pairs, due to their monogamous nature. During fish spawning, especially that of salmon, there have been records of over 1,000 individuals feeding at the same site.

Despite being the national bird of the United States, bald eagles were once close to becoming extinct in the wild. Before the early 1970s the use of the insecticide DDT was commonplace across North America. The chemical DDT remains in the ecosystem for long periods of time and had a hugely negative effect on bald eagle numbers.

DDT was commonly found in fish and other animals which the eagles preyed upon and this led to fewer eggs hatching and chicks born with deformities. During this time there remained only a few hundred bald eagles in the wild. Fortunately the eagles were granted protected status and following a complete ban on the use of DDT, eagle numbers increased and the bald eagle population of North America is now considered stable and healthy. 1

1. Bald eagles are not actually bald

Despite their name, bald eagles have white, well feathered heads. The word bald once meant ‘white-haired’ and this was the name given to the eagle.

Young bald eagles often don’t have white feathers on their head either, they are mostly brown. They develop these from around 5-6 years old. 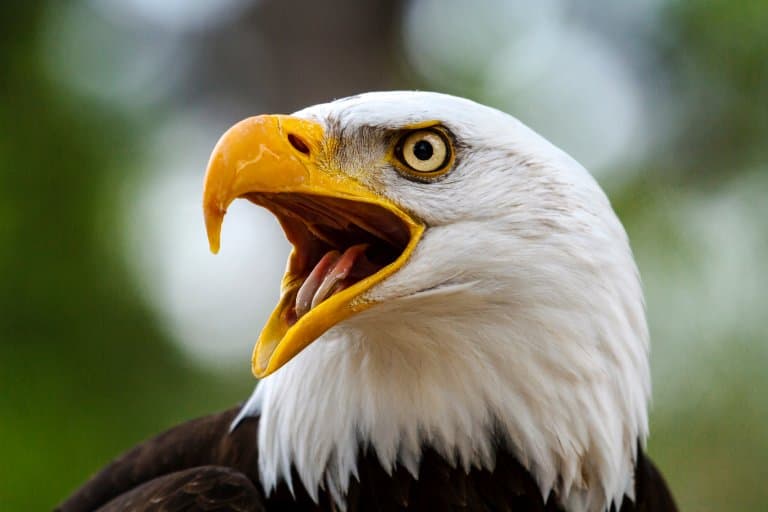 2. They form a species pair with the white-tailed eagle

A ‘species pair’ means two species are so similar in appearance and other features that the boundaries between them are often unclear.

While roughly the same size and apperance, the white-tailed eagle is thought to have a somewhat paler brown body plumage and inhabits Eurasia, rather than North America.

The pair are thought to have diverged from other sea eagles.

3. They have high pitch, rather underwhelming calls

They have a high pitch giggle-scream, rather than an impressive powerful scream that might be the expectation of a bird of the size and power of the bald eagle.

Their rather underwhelming call has historically been dubbed over in some TV shows to make it sound more impressive!

When in groups, they emit these surprisingly high-pitched calls to one another and it is believed these vocalisations are a form of transferal of knowledge regarding the area and abundance of prey.

This means the largest bald eagles are generally found in Alaska, and can weigh as much as 7kg with wingspans of 2.4m in length. 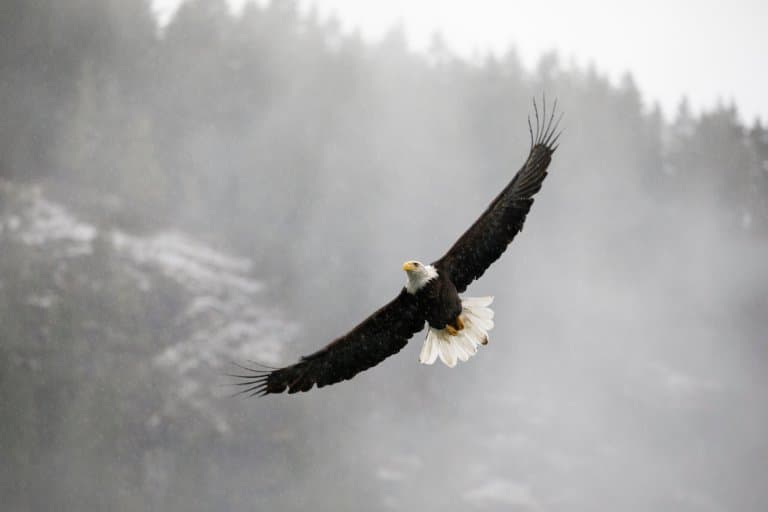 The osprey, a much smaller fish-eating raptor, often shares the same habitat as bald eagles.

There are many records of bald eagles following osprey and stealing fish they have caught, either straight from the unfortunate bird or when it lands on a nest or perch.

It’s not often that they dive vertically, but they are capable of reaching extremely high speeds when diving for prey!

Like most birds of prey, the bald eagle has excellent vision, with sharper vision, a wider field of vision and they can even see UV light. It’s thought they are able to see a tadpole move at over 100m distance. It uses this exceptional sense to locate prey while flying at speed.

Bald eagles also have a see-through eyelid called a nictitating membrane, which they can close to protect and clean their eyes, but still see! 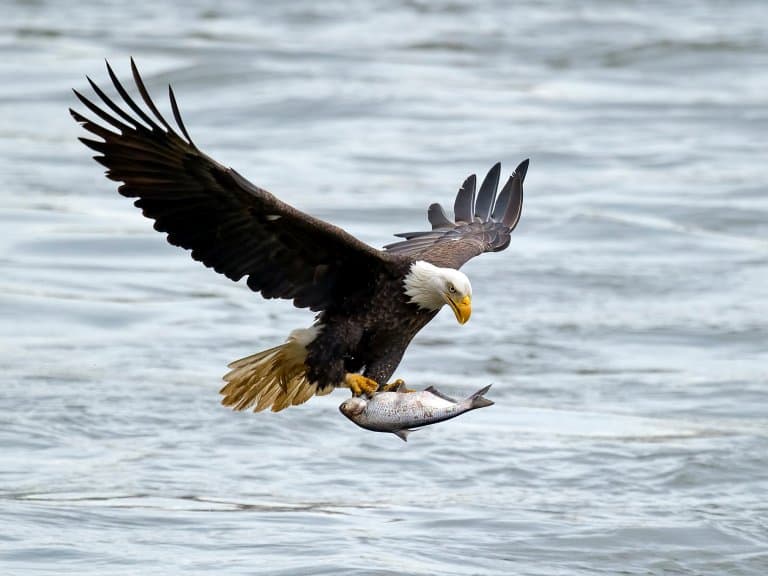 8. They can catch animals as large as Canada geese

Though they prefer fish, bald eagles will also hunt animals as large as geese which can grow up to 1m in size, and even foxes!

Bald eagles will sometimes try to catch fish that are too large to pull out of the water.

They will rarely let go of prey once they have gripped onto it. Occasionally they will not be able to pull the fish out of water and will subsequently swim to shore with their catch. They use their wings to perform a breaststroke of sorts!

It’s a myth that their talons get ‘locked’, they just refuse to let go!

10. Their nests can measure over 2.5m in diameter!

Bald eagles have some of the largest nests of any North American bird, occasionally measuring over 2.5m (8ft) in diameter and 4m (13ft) deep.

According to the Guiness World Records, the bald eagle also has the largest nest ever discovered near St Petersburg, Florida in the US in 1963. The nest measured 2.9 m (9 ft 6 in) wide and 6 m (20 ft) deep and weighed more than two tonnes (4,409 lb).

The size of this eagle and nest size requirements mean that they are very particular when it comes to choosing a nest site.

By far the majority of bald eagle nests are found in large, living tall trees which have strong, thick branches to support the mass of the nest as well as the birds themselves. The nests comprise of hundreds of smaller branches and twigs, often with larger branches around the edge.

They usually lay between 1 to 3 eggs with two hatchlings most often surviving up to fledgling stage. Fledged chicks leave the nest at around 10 weeks but will still be cared for by their parents for just over a month. 2

11. They will sometimes nest on large electricity towers or pylons

12. The oldest nest on record was used for over 30 years

If well-built in an ideal tree, bald eagle nests can last for many years. One such nest lasted for 34 years before the tree in which it was built was blown down. 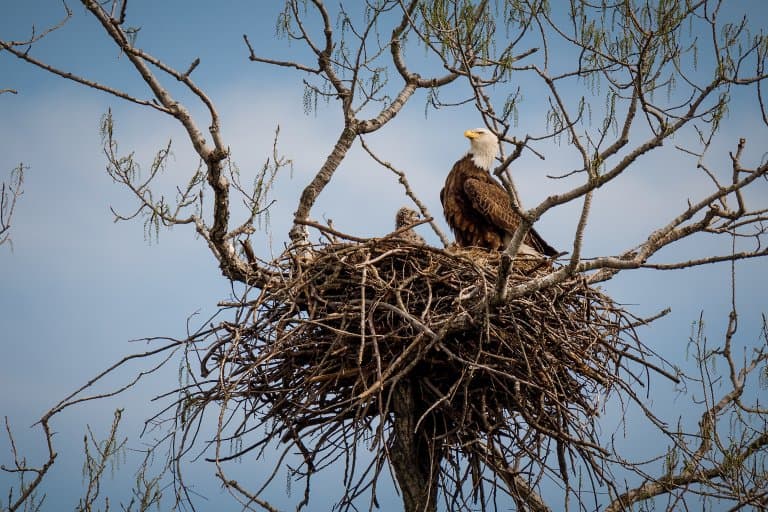 13. Bald eagle chicks will cling onto and move sticks within their nests

Chicks develop the muscles in their feet and legs by playing with the twigs and sticks in their nests and even playing tug of war with their siblings.

14. Immature eagles live a nomadic existence until they find a mate

Once young bald eagles have left their parents, they spend much of their time flying across large ranges, seemingly learning about the different habitats that occur in that range.

Though they are found on different continents, both eagles bare remarkable similarities. Both occupy a similar ecological niche and have similar colouration.

However the African fish eagle is somewhat smaller, is a lighter brown colour and has a black tip to its beak.

16. President Benjamin Franklin would have preferred the wild turkey as the national bird

People often wrongly believed that bald eagles were cowardly animals as well as prolific thieves of other birds. Even a former American president thought the bald eagle was a poor choice as the national bird. 3 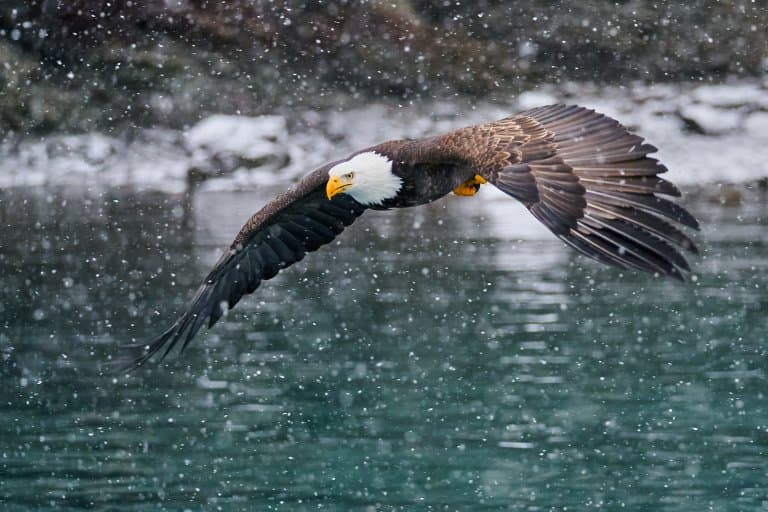 17. They are an endangered species success story!

In 1963 researchers estimated there were just 400 pairs of bald eagles in the US.

Thanks to years of protection and a complete ban on the insecticide ‘DDT’, there are now more than 300,000 bald eagles in the lower 48 states, and the species is no longer endangered.  4