Babirusas have a distinct prehistoric appearance that has made them the stuff of legends.

They are sometimes referred to as ‘deer-pigs’ and live in a very limited area that includes swamps and forests in an Indonesia island of Sulawesi. 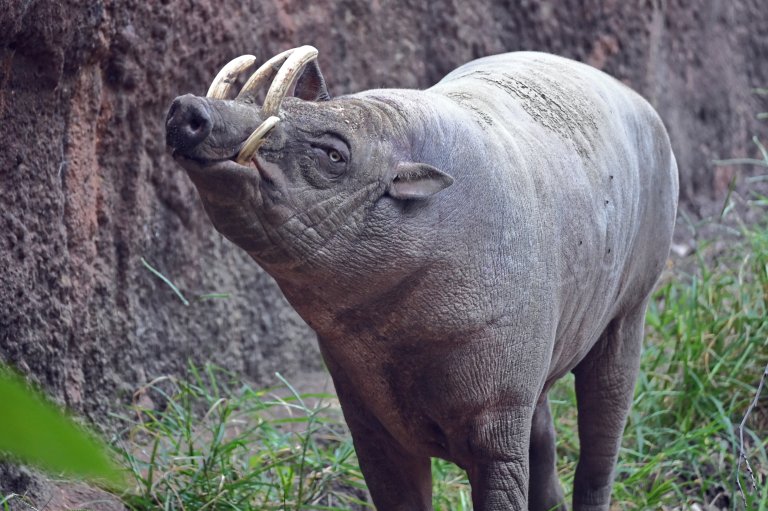 Babirusas are sometimes called “prehistoric pigs,” and for good reason. Their stocky bodies and curved teeth give them the appearance of an ancient animal.

They are part of the swine family, which includes pigs, hogs, boars and warthogs.

They have been depicted in cave drawings more than 35,000 years old. These unusual animals can still be seen today in their small native habitats.

Babirusas are a threatened species and protected in Indonesia where killing them is illegal, although poaching remains a threat to Babirusa.

These names come from the features that babirusas share with both kinds of animals. Their rounded, hairless bodies resemble domestic pigs, while the teeth that grow over their heads can resemble deer antlers.

Male babirusas have 2 set of tusks that curve over their heads and between their eyes. Each tusk ends in a sharp point. 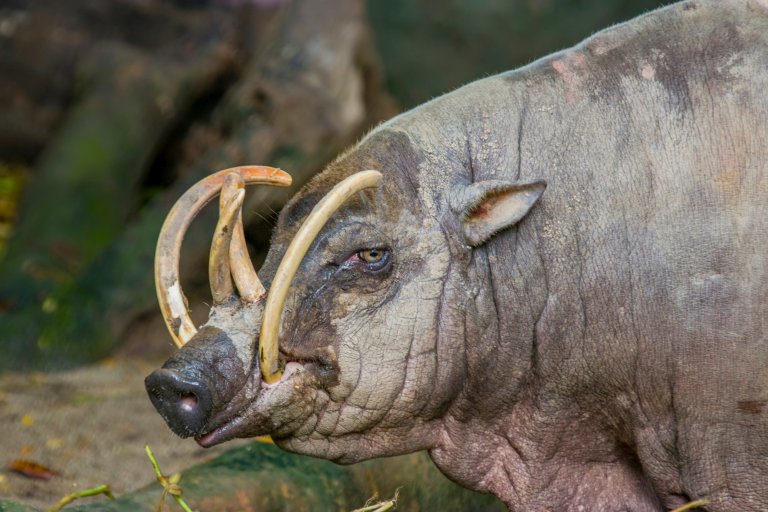 3. Babirusa tusks can grow through their skulls

These teeth can grow long enough that they puncture the roof of the babirusa’s mouth and out the top of their snouts. Despite their fearsome appearance, these tusks do not appear to cause the babirusa pain. 1

4. Females have very small or no tusks

In contrast to the males, female babirusas lack the distinctive large tusks for which the species are known. If they do develop tusks, they are very small and do not grow through the snout.

5. They were once a single species

A fourth species, Babyrousa bolabatuensis (the Bola Batu babirusa), has been proposed by some scientists.1 Experts have not yet decided whether these animals are distinct enough from existing babirusa species to be considered separate.

7. They are in need of protection

Of the 3 existing babirusa species, 2 (the hairy babirusa and the Sulawesi babirusa) are considered vulnerable. The Togian babirusa is considered threatened and in need of greater protection and conservation. 3

Male babirusas are solitary and generally only encounter other individuals to breed or fight. Females live in small groups of 3 or 4 individuals plus young, and male young usually leave the group as soon as they can fend for themselves. 4

9. They can communicate in groups

Babirusas communicate through a series of grunts and moans that alert other individuals to food or danger. 5

10. They use their tusks for fighting

Male babirusas will fight over mates and resources. They charge at other males and attempt to stab them with their sharp tusks.

The outside of a babirusa looks like a pig, but their internal organs share some of the same functions as well. Their digestive systems break down their varied diet similar to domestic pigs.

12. They are missing a bone in their nose

Unlike pigs, babirusas rarely root, or dig, into the ground. Their snouts are missing what is called a rostral bone. This bone keeps the snout rigid and stable. Without it, babirusas cannot pierce the hard dirt.

They have been known to eat dirt and rocks in the course of their normal feeding habits. Although the exact reason for this unusual behaviour is unknown, it is thought that eating these materials may provide babirusas with minerals that are missing from their diets. 6

14. They are the inspiration for demons

Depictions of demons in Indonesia look similar to babirusas. This has led some researchers to believe that their appearance in the shadowy jungle may have inspired myths and superstitions. 7

15. They are sometimes given as gifts

The babirusa’s habitat consists of small islands between larger ones. Researchers have guessed that this unusual distribution came about when babirusas were given as gifts among the islanders. Once set free in their new homes, the babirusas reproduced and their populations grew.