In Cantonese, it’s known as the “Snake’s Head Moth” and is said to resemble a cobra. In Indonesia, locals call it Kupu Gajah: the elephant, or “large” butterfly. And large it is!

This is one of the largest insects in the world, and one of the top three biggest moths. Named after a Titan of Greek mythology, the Atlas moth lives up to its name.

It’s a member of the Saturnids: a family known for their dazzling colours and enormous size, and it certainly doesn’t let the family down. 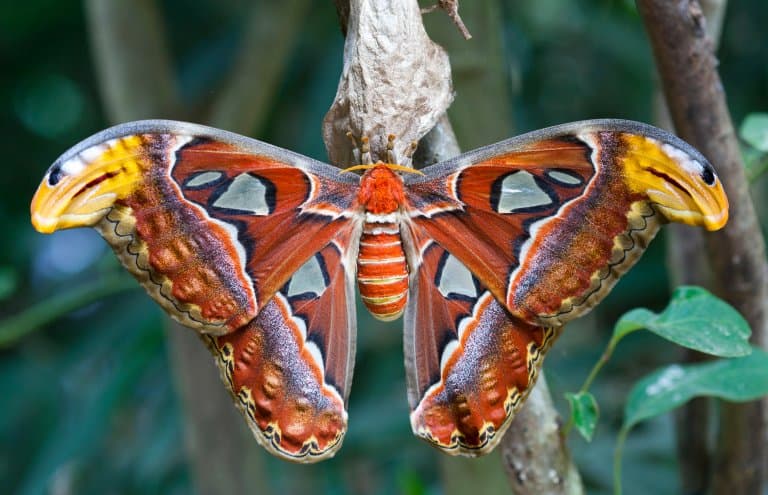 They have the largest wing area of any moth, and its body is disproportionally small in comparison to its wings. This surface area gives it an advantage when it comes to defending against predators, but it makes the animal cumbersome in flight. As such, it prefers to relax for its short life as an adult moth, only taking action in defence or response to the smell of a mate.

These gentle giants can cause havoc in a citrus plantation, but they’re becoming very popular for their silk. This has led to a lot of research being done to figure out what they like to eat and the best living conditions for them. They also have some cool defence mechanisms!

Let’s take a look at some of the things that make this huge insect so special.

1. They are the third largest moth in the world

Their wingspan can measure up to 24 cm (9.4 in) and only the white witch (Thysania agrippina) and Attacus caesar moth have surpassed it.

The white witch (Thysania agrippina) holds the record with an incredible 30 cm (12 in) wingspan.

At least, once they emerge as adults, that’s the end of their feeding.

The mature moths have vestigial mouthparts that are small and useless, and as such, the adult stage will only live long enough to mate, which is usually no longer than a couple of weeks.

This means that they’re reluctant to use up their precious energy, and with such cumbersome wings, flying is quite resource-intensive. Instead, they spend most of their time within a short distance of the site of their emergence.

At night, or in the evening, they use their huge antennae, each one built like an FM radio antenna, to pick up on pheromone cues from the opposite sex. 1

4. Their wing motion is a species feature

Most insects have a rigidity to their wings that aids them in flight. In moths, the beating of a wing involves twisting and bending, which makes the motion very hard to analyse. Researchers trying to figure out the mechanics behind a moth’s flight found it too complex to compare against non-deformable wing simulations.

It’s thought that the nature of a wing’s motion in insects is so unique that it can be used to tell species apart. There’s still quite a lot that doesn’t make sense with these wing motions, and unlocking the mysteries might help engineers design new technologies. 2

5. They have a high mortality rate

Moths, like most (if not all) insects, reproduce using what’s known as R-strategy.

This is basically the scatter-gun approach to making babies, where an animal gets out as many eggs and offspring as possible and hopes for the best.

In Atlas moths, this translates to an 89% mortality rate, with most larvae dying not long after hatching from their eggs.

6. Their silk is prized

Though the silk from the silkworm tends to be produced in longer strands, it’s said that Atlas moth silk is stronger and more durable as a textile.

These properties have led to the cocoons being traditionally used as coin purses in parts of Taiwan, and have led also to more contemporary applications in shoes, jackets, lampshades and scarfs. 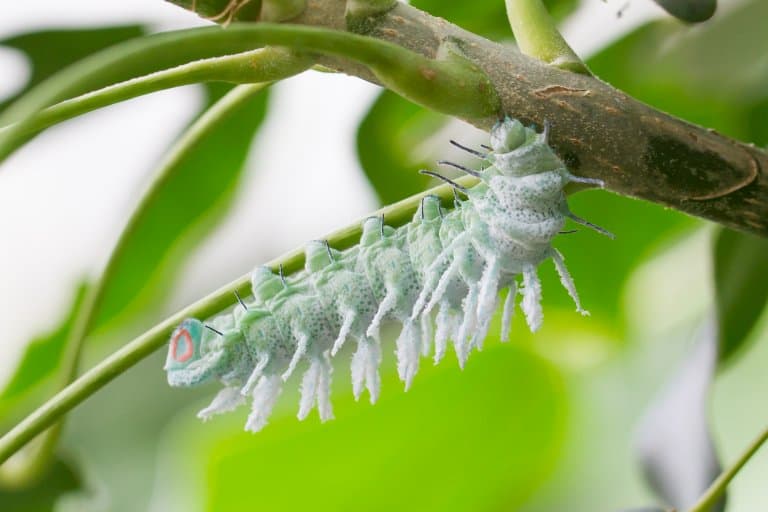 7. This has led to a lot of information on how to rear them

Despite the fact that each species has a supporting role in the sustainability of the ecosystem we live in, it seems like the world only takes an interest in one if there’s a financial gain to be made from it.

Fortunately for the Atlas moth, the quality of its silk has prevented it from being considered a pest – even though it eats a bunch of mango leaves – and instead, great care has been placed in the healthy rearing of captive specimens, to the point where there are entire catalogues of information on how to design the best artificial diet for them.

This information is primarily designed to help people get the best possible silk out of the caterpillars, but it’s also interesting for hobbyists and researchers alike. 3

8. The larvae have butt canons

When threatened, the caterpillars of this moth have a very irritating defence.

There are special glands in the abdomen that contain histamine, a compound responsible for allergy symptoms (the one that you take antihistamines to suppress), that, in response to a threat, explode out of pressurised channels to deter predators. 4

The bizarre-looking caterpillar of the atlas moth is thought to mimic bird faeces as a way of avoiding predation. It produces a waxy white secretion that does make it look a lot like something even less appetising than a caterpillar.

This wax also functions as a physical barrier against ants and parasites and presumably helps the animal maintain hydration.

The adult moth has a dappled and enormous wing area that is said to resemble a snake.

When attacked, they’ve been known to thrash around on the ground, apparently mimicking an uncurling serpent. They’re also known to play dead, blending in with the leaf litter of the forest.

Their local name in Cantonese translates to “snake’s head moth” because of the protrusions on the wings resembling a snake’s head. 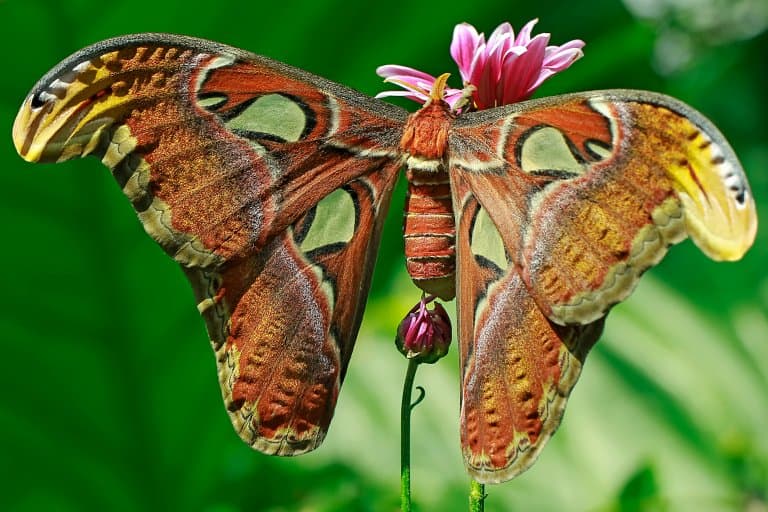