Atlantic wolffish are a species of large, mostly solitary fish native to the North Atlantic Ocean. They are known for their unusual teeth and breeding behaviours. 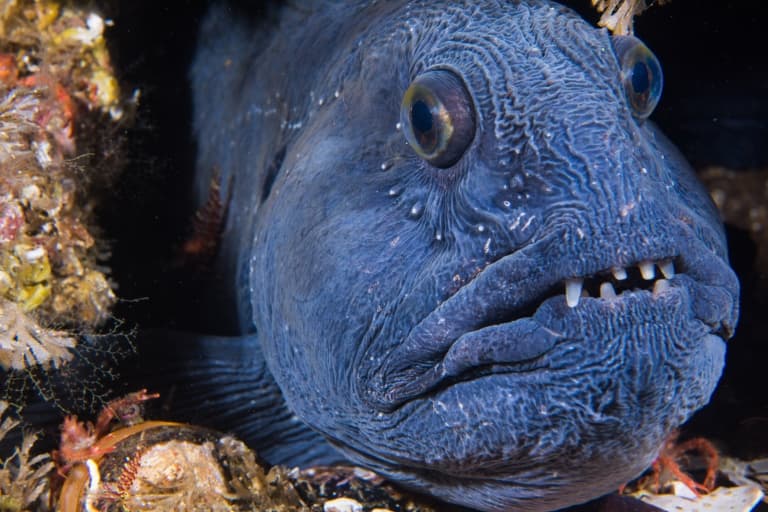 Atlantic wolffish are a benthic species, meaning that their natural habitat is the bottom of oceans.

Their distinctive teeth, unusual adaptations for aquatic life, and role in the ocean ecosystem make them an important animal to study.

They are currently a species of concern due to overfishing and bycatch, however there is little data on their population as they live on the bottom of the sea bed.

1. Atlantic wolffish get their name from their impressive teeth

They have a set of cone-shaped, fanglike teeth on both their top and bottom jaws. These protruding teeth give them appearance of a wolf or other fearsome predator. 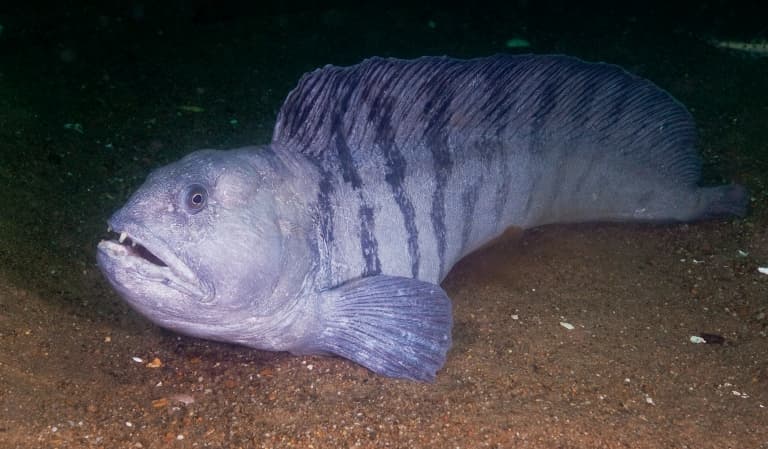 2. They have many different names

3. Atlantic wolffish come in a variety of colours

Their skin ranges from blue-grey to green and purple. 1 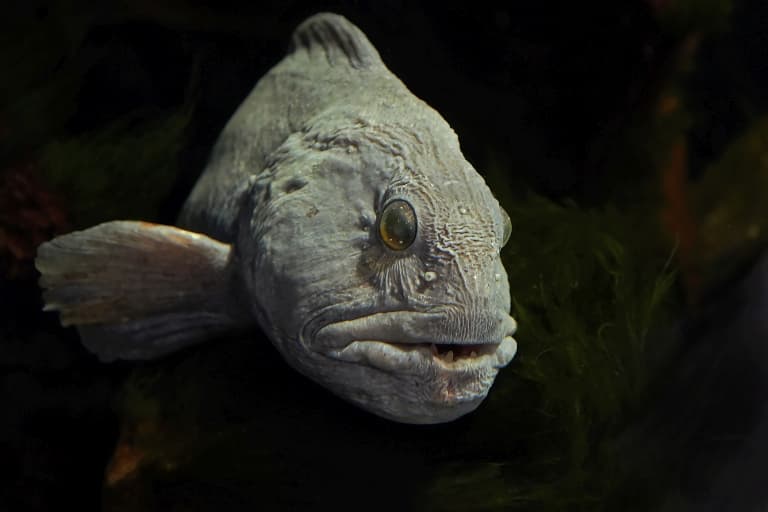 4. They have several different kinds of teeth

In addition to frontal canine teeth, Atlantic wolffish also have flat teeth in the back of their mouth. Their throats have a series of sharp serrated teeth that help the wolffish digest the sharp shells. 2

One might expect Atlantic wolffish to prey on other fish, but this is not generally the case. Their diet consists primarily of invertebrates with hard shells such as crabs, sea urchins, mussels, and whelks.

Atlantic wolffish can be found on the ocean floor in both shallow and deep water. Some have been found in areas as deep as 500 meters (more than 1600 feet). 3

This species is a weak swimmer and lacks the pectoral fins that help other fishes move easily through the water. Once an Atlantic wolffish has found a suitable habitat in a cave or crevice, it rarely leaves that area. 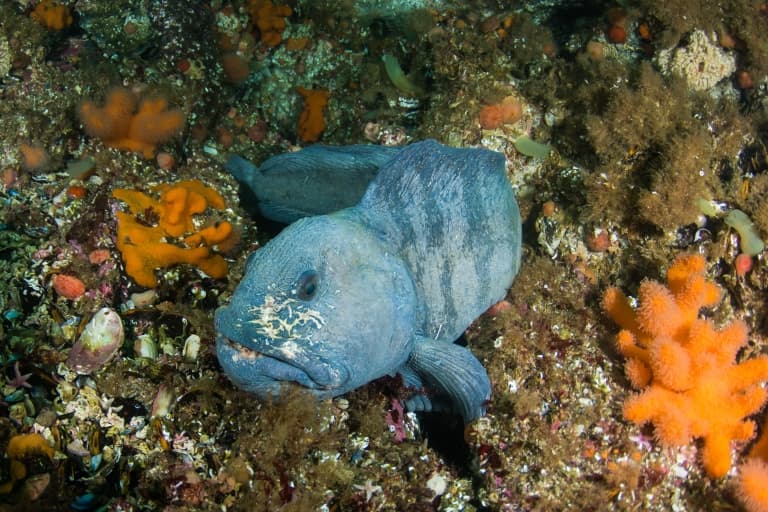 8. Hard ocean floors are their home

Unlike other fish who swim up and down in the water column, these fish prefer to make their homes on the rocky floor of the ocean. This provides them with ample access to the prey that make up their diet.

Water temperatures can drop dramatically during the winter, but this does not impede Atlantic wolffish. They are found in waters as cold as 0° Celsius (32° Fahrenheit) and may be able to withstand temperatures that are even lower.

10. A natural antifreeze runs in their blood

Atlantic wolffish create proteins that enable them to survive in extremely cold temperatures without damaging their body systems. 4

11. They can live in different salinities

Few fish can survive when the salinity, or concentration of salt, in the water around them changes. Atlantic wolffish are able to move between areas of higher and lower salinity without damage. Their bodies excrete salt ions in high-salinity areas and absorb them in low-salinity areas.

Most species of fish reproduce when the female releases eggs and the male fertilizes them. Atlantic wolffish are unusual in that the female retains the eggs inside her body during fertilization. She then lays the fertilized eggs in clumps on the rocky ocean floor. 5

Another uncommon behaviour of the Atlantic wolffish is its mating rituals. Females will identify a desirable male and “court” him by swimming around the male and rubbing against his body. Once an Atlantic wolffish has chosen a mate, they rarely breed with a different individual.

14. Both male and female Atlantic wolffish are involved in raising young

After the female lays her clutch of eggs, male Atlantic wolffish guard the nest. They stay this way for more than 4 months, protecting the fragile eggs and spawn until they are able to fend for themselves. 6 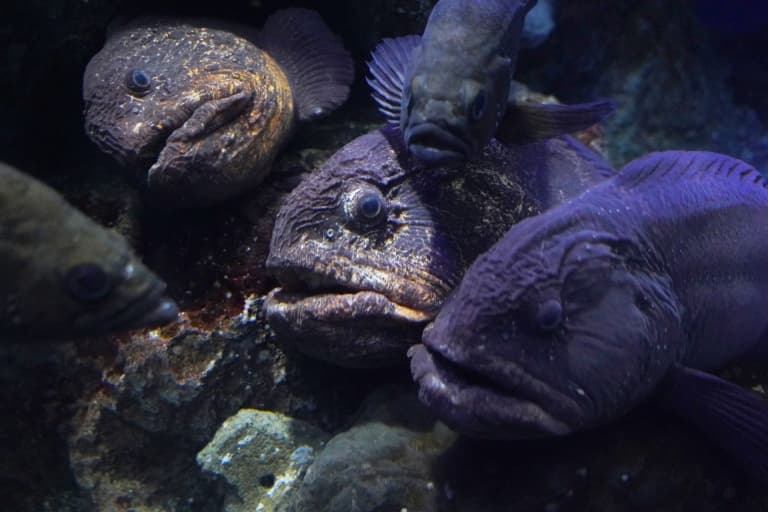 Most fish eggs are tiny. At 5.5 to 6 millimetres (about 0.2 inches), Atlantic wolffish eggs are among the largest of the fishes.

16. It can take up to 6 years for an Atlantic wolffish to mature

Young Atlantic wolffish develop relatively slowly, and many do not become sexually mature until around 6 years of age.

17. Overfishing and bycatch pose serious risks to them

One of the Atlantic wolffish’s primary predators is humans. Although these fish are a source of food for some people, they are generally caught by accident. Overfishing (harvesting fish faster than their population can recover) and bycatch (accidentally catching a fish while attempting to capture others) have dramatically reduced Atlantic wolffish populations. 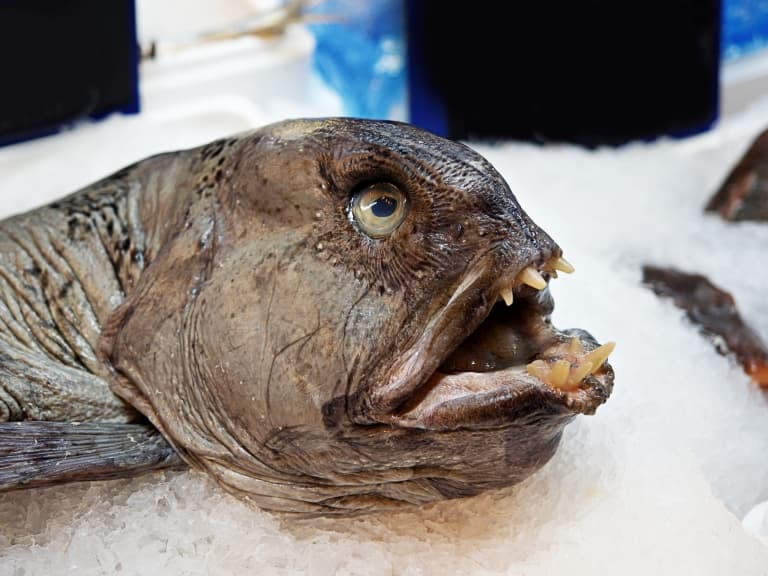 18. Atlantic wolffish are in danger

The IUCN lists Atlantic wolffish as a “data deficient” species, meaning that there is not enough information available to determine how many individuals survive. However, the NOAA National Marine Fisheries Service has deemed Atlantic wolffish a “Species of Concern” warranting protection and conservation efforts.

19. They help other species survive

Atlantic wolffish play a crucial role in controlling the populations of green crabs and sea urchins. These species reproduce quickly and can take over an area, consuming so much food that little is available for other animals. Atlantic wolffish reduce the size of crab and urchin populations by feeding on them, ensuring that other species are able to survive.