People are generally hysterical and over-reactionary when it comes to wasps. Often, they’ll flap about, run screaming and do almost everything they can to inspire one to sting them, despite this being the very thing they’re afraid of. In most cases, this is generally unfair to the wasp, who is almost always just going about their day.

There’s one wasp though, that gives even the most hardened entomologist a meditative challenge in staying calm. They sound like a petrol lawnmower, can sting through a bee suit and carry an unusually long stinger to do it with.

This is the Asian giant hornet, also known as the giant Northern hornet, or murder hornet. But are they really to be feared any more than other wasps? 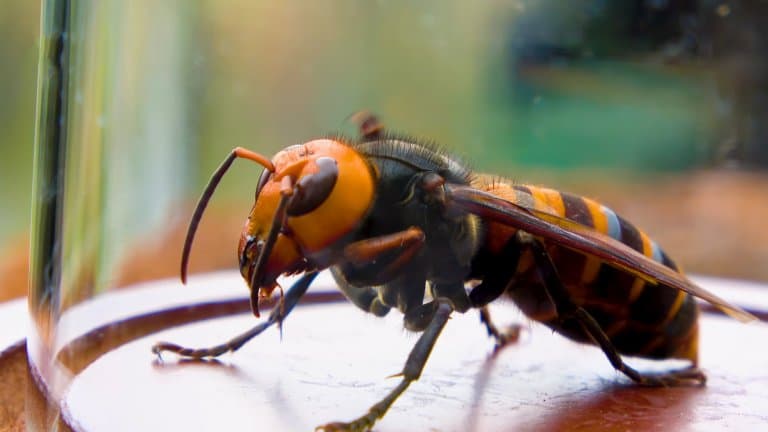 The Asian giant hornet is a beast. It’s the largest species of wasp in the world and a ferocious insect killer. They have a long strong, armour plating and a hankering for honeybees.

Asian giant hornets have an orange head, and dark thorax while their abdomens are banded yellow-orange, black and brown.

They are mainly found in Asia, including countries such as Japan, China, Korea, Taiwan, Russia, Thailand, Laos, Cambodia, Vietnam, Nepal, India and Sri Lanka. They have also now been seen in North America, but are not present in Europe.

Like other wasps, they will build a nest each year, will have a single queen and workers in a colony – all who have their own duties. They like to diet on medium to large insects, such as bees, other hornets and wasps, beetles, crickets and moths.

Once thought to be feared by local farmers, upon further inspection, they’re not much of a threat at all; choosing, like most wasps, to leave people alone unless provoked.

1. They’re the largest wasp species in the world

The average Asian giant hornet worker can grow up to nearly 2 inches in length, with a wingspan of around 3 inches. Its stinger is 6mm in length alone (around a quarter of an inch).

However, ‘Queens’ can grow considerably larger to over 2 inches in length! 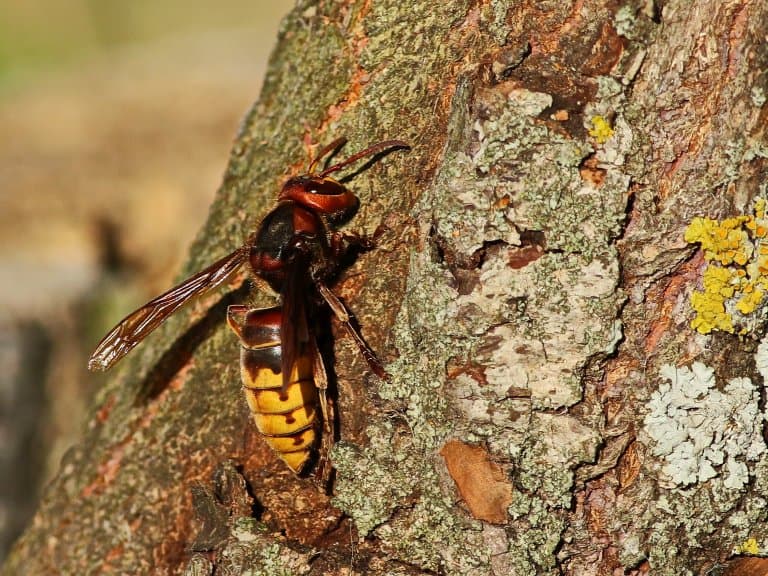 Most wasp species build their nests high up, either out in the open or covered inside trees or attics. The Asian giant hornet only occasionally nests this far off the ground, instead preferring to form their papery homes inside mammal burrows. This makes them hard to find, hard to monitor, and easy to stumble upon by mistake.

When threatened, like most wasps, Asian giant hornets will aggressively defend their nests. However, like most wasps, if they’re left alone, they aren’t at all interested in messing with people. When people are stung, while painful, it’s rarely a dangerous experience unless the person happens to have an allergic reaction.

While 62 people in the US are killed by bees and wasps every year, this hornet has a significantly lower threat; responsible for only 50 deaths per year in its natural habitat.

Unlike in bees, wasps and hornet queens typically only live for a year. At the beginning of her life, the queen giant hornet will burrow into the ground and wait for Winter to pass before she starts laying eggs. The sterile female hornet larvae that are produced are fed on tree sap until they mature, take over the running of the nest.

Worker populations will reach around 100 individuals, Later in the season, fertile males and females will be reared, and released into the area. The colony then gradually collapses as the queen dies, and the new generation of hornets set up new nests elsewhere.

Queen wasps violently resist males, leading to a sexual selection for powerful genetics to continue the lineage; with only 45% of queens finding a suitably strong mate. 1

In 2019, populations of Vespa mandarinia were found in British Colombia and Washington State. These colonies were apparently eradicated but it’s unknown whether there are hidden invasive populations yet to be found. The invasive colonies would have some advantages over their honeybee prey and could therefore represent a threat to local species. 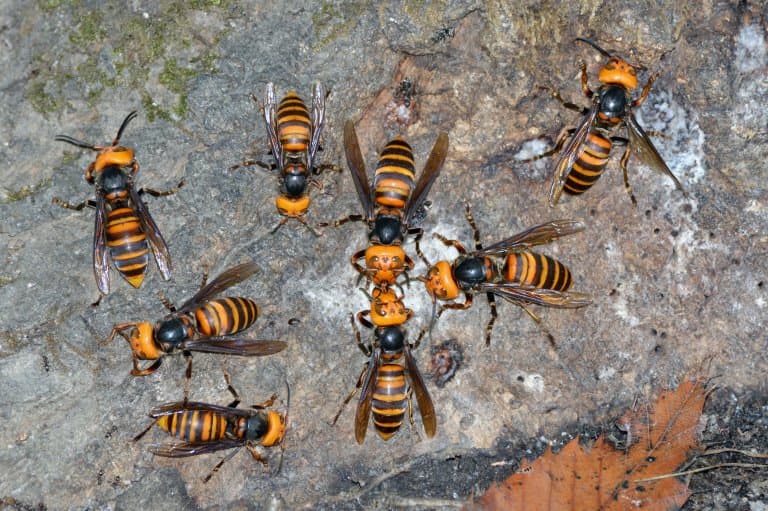 5. They’re a potential threat to agriculture

In general, wasps are poor pollinators, so by many, they’re not considered significant to their ecology. However, they’re extremely important predators, they provide selective pressure and limiting factors to many herbivorous insects. And in some species, they do pollinate too.

The giant hornet, on the other hand, pollinates only a parasitic plant species and actually has a negative effect on pollination in agriculture due to its predation upon honeybees and other pollinating insects.

6. Murder hornets can decimate a colony of bees

These Northern giant hornets are sometimes called murder hornets and for good reason. Later in the season, as the colony grows larger, hornets abandon most of their other insect prey sources and focus primarily on honeybees.

It’s unclear why this is, but considering the life cycle of the hornet queen, and the synchrony of her fertile egg production, it’s possible it has something to do with the quality of the food source and its impact on hornet development.

When murder hornets invade a honeybee colony, they really go to town. An individual hornet may attack a handful of bees and return to its nest. But on occasion, and nobody knows exactly how this works, hornets will form death squads and enter what is called the slaughter phase.

Not much is known about the triggers for this, but it’s thought that when three or more hornets begin an attack, they become entirely committed. Each hornet, when feeding on honeybees, will form a meaty ball from the highly-proteinous thorax of the bee, leaving the head, the abdomen and the legs behind. However, when in slaughter mode, the hornets will not return to their nests after a kill. They will abandon the corpse, and move through the colony, killing every bee they come across.

These hornets are well armoured against bee stings and can sever heads with a single bite. The attack continues until the entire colony is destroyed, at which point, the hornets enter the brood chambers and predate upon the larvae and eggs. At this occupational stage, the attackers will relay the honey and food from the bee colony to the hornet nest for up to two weeks.

A slaughter on a honeybee colony can be over in a matter of hours. A small group of 15 hornets can wipe out 25,000 bees with violent efficiency. Whether these are specifically-timed attacks as part of the colony’s reproductive strategy remains unknown.

The honeybees in Asia have developed a fantastic defence mechanism against giant hornets.

Apis cerana have evolved to form ‘heated bee balls’ around attacking hornets and, by swarming the hornet, buzzing their wings, and increasing the heat and carbon dixoide to levels higher than the hornet can tolerate it kills them.

Essentially the wasp is suffocated and cooked alive by the bees.3

9. Western honeybees have no defence

Unfortunately, honeybees in Europe and the US are a different species, Apis melifera.

Having never encountered Asian hornets, they didn’t evolve this defence, making them vulnerable to invasion, should the hornets return and attack.

10. While large and scary, their sting is non-lethal to humans

Their venom is actually less toxic than that of other wasp species, but they can inject more per sting due to their size. Their stinger is long enough to puncture thicker protective clothing, such as those usually worn by beekeepers.

They can also sting multiple times and will defend their nests, and can attack as a group, but in general are not aggressive unless provoked.

The most deadly wasp venom has a lethal dose in 50% of cases rated at 1.6mg/kg. This means for an average, 65kg human, a dose of 104mg of this venom would result in a 50% chance of death. The Asian giant hornet would need to inject the same person with 260mg for the same result.

Hence, their venom in general shouldn’t be a problem for most people, but is more dangerous to children, those with pre-existing health conditions or anyone allergic. They can be more dangerous to anyone if they are stung multiple times. 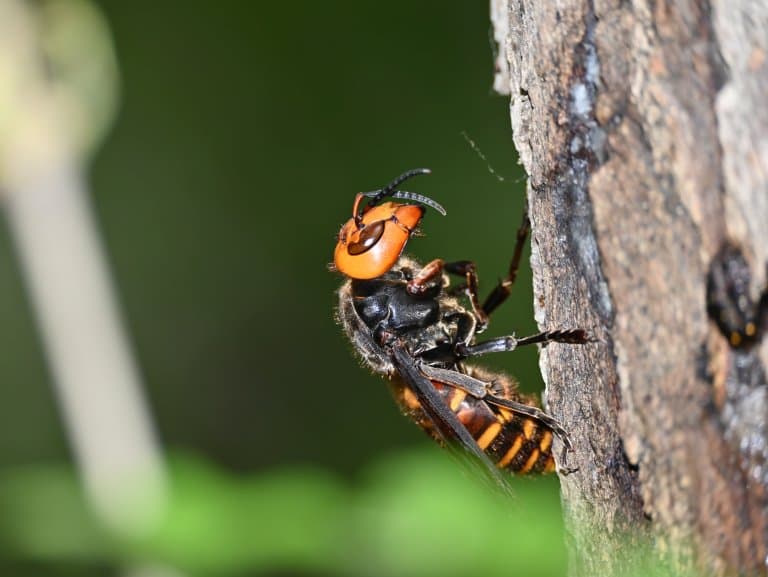 11. They can spray their venom too!

There has been reports from Japan that the Asian giant hornet is able to spray their venom, as well as adminster it by their stinger.

In one case, someone was sprayed in the eyes with venom, which is believed to have caused some long-term visual impairment.

12. They are a delicacy in Japan

In some mountain villages their larvae is hunted down, fried and then eaten as a delicacy. Adult wasps can also be cooked on skewers (including the stinger!) and eaten when crunchy.