There are a number of frogs referred to as ‘bullfrogs’. Aside from being frogs, American, Asian and African varieties have nothing much in common genetically, any more than a tree frog has with a garden toad.

For this piece, we’re looking at the infamous American invader – the American bullfrog, one of the more notorious species of frog. 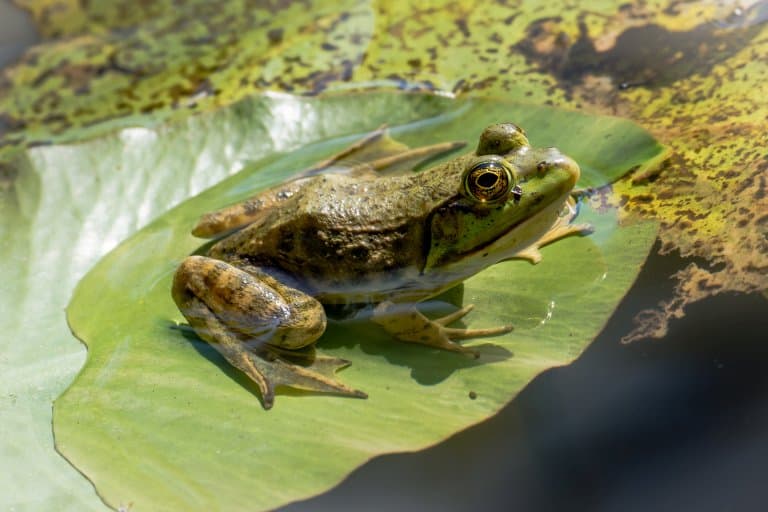 American bullfrogs, so named because they sound like bulls during breeding season, have exploded across the country, and even across the globe. They inhabit large bodies of water, such as lakes, canals, ponds and swamps.

They are olive green in color, and are the largest species of frog in North America, growing between 9-15 cm (3.5 – 6″) in length and weighing up to 800 grams. They’re distinguishable by their huge tympanum (ear drum), worn proudly by the males on the side of their heads.

These are exceptionally resilient and destructive amphibians, and frightening hunters of pretty much anything smaller than they are. They are ambush predators and will prey on small animals, including lizards, snakes, rodents, frogs, insects and more.

They have a powerful leap and a huge mouth, and despite their popularity as a food source, have proven difficult to farm.

One thing that makes an animal successful is a generalist diet. Humans, dogs, foxes, rats, cockroaches, and pretty much anything that can survive in a range of habitats does so by being able to adapt to whatever food sources are around.

Bullfrogs are not picky eaters. As tadpoles, they’ll eat plants. As Adults, they will consume anything that moves if they can fit it into their mouth. This might be scorpions, mice, crayfish, bats, tarantulas, or snakes, as well as the usual frog food like snails and worms.

Much like their hominid neighbours, these oversized, voracious gas bags have infested numerous countries outside of their native range and often contribute to the mindless destruction of their environment. Their ability to consume is almost unprecedented, and this allows them to thrive at the expense of the habitat destruction wherever they go.

The bullfrogs are no better, either. They’ve been classed as highly invasive in multiple countries in Europe, Asia, and South America and efforts to control their population by releasing sterile males have had limited success. 1 2 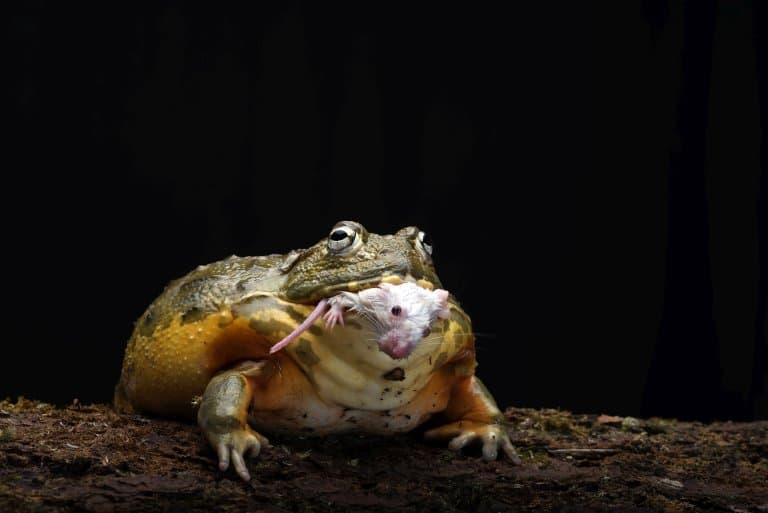 It’s been about 200 million years since amphibians were big enough to eat people. Nowadays, frogs are typically small enough to be overlooked as scary predators, but it’s worth trying to imagine yourself a little smaller in order to get a handle on just how frightening these animals are when they hunt.

If you were small enough, and you were splashing about in bullfrog territory, like with a T-rex, it would be your motion that would trigger its hunting instincts. This ambush predator would spot you from the reeds and slowly turn to face you.

From there, it’s worth paraphrasing from a classic Hollywood account of a similar aquatic encounter:

“Y’know, the thing about a bullfrog, he’s got… lifeless eyes. Black eyes, like a doll’s eyes. When he comes at ya, doesn’t seem to be livin’… until he bites ya. And those black eyes roll over white, and then… oh, then you hear that terrible high-pitch screamin’, the pond turns red, and spite of all the poundin’ and the hollerin’, they all come in and they… swallow you whole… Little shakin’, little tenderizin’, an’ down you go”.

The hunting leap of a bullfrog involves the animal closing its eyes and lunging blindly towards its prey.

The mouth opens, and a meaty, sticky tongue is ejected, engulfing the prey and pulling it inside, often within 0.7 seconds. If it’s a large morsel, the frog then uses its creepy hands to stuff it in. With mammals, they’re often dragged under the water to drown them before swallowing.

These killing leaps are powered by some incredible adaptations.

They have the ability to contract their muscles in a way that stores energy in their tendons and connective tissues, which is then released as the plantaris muscle extends, adding power to the leap.

This generates enough energy to propel the frog ten times its body length.

Male American bullfrogs have a distinctive call that sounds like a bull, which is where they get their name.

Between May and June, male bullfrogs will congregate at a breeding site to attract females. These groups are called choruses, which are similar to lek behaviour in birds.

They use their calls under different circumstances, including calls to attract females during breeding season, territorial calls as threats to ward off other males, and preceding fighting.

Males will wrestle for position and to establish social dominance in choruses. They do this by jumping at one another, putting their arms around each other and rolling around.

6. The hunter becomes the hunted

While in tadpole form, as gentle vegetarians, bullfrogs are under threat from dragonfly nymphs, garter snakes, water bugs and other small predators. Over the three years, it can take for a bullfrog to morph into an adult, the ecology is heavily in the favour of its predators.

This soon changes after maturity, as the bullfrog immediately turns on its bullies and begins to consume them on the daily, without remorse or self-control. 3

Bullfrogs seem to be able to munch on wasps and hornets without giving much attention to the power of their stings. They also may be somewhat impervious to the venom of the copperhead snake, one of their natural predators. 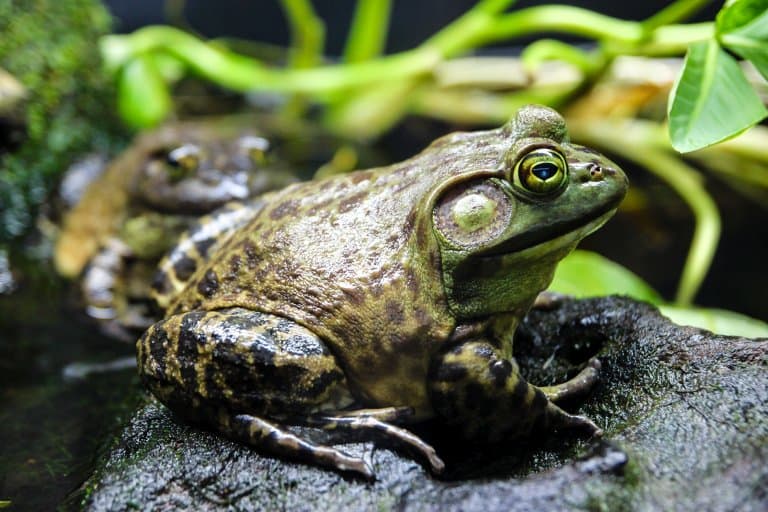 You’d think such an indiscriminate eater would be easy to farm, and the demand for their little drumsticks is certainly high enough to make this a profitable venture. However, their eating habits present two major issues to cultivating hordes of these frogs for food.

Firstly, they eat one another. This is not ideal. Secondly, they don’t seem remotely interested in the mass-produced pellet food that is produced for farming them. It seems as liberal as their dietary preferences are, even bullfrogs draw the line at processed food.

9. They thrive on destruction

These frogs aren’t fussy about their habitats, as you may have gathered. In fact, they seem to prefer polluted lakes. They’re looking for warm, still, and shallow pools to reproduce in, and many artificial ponds and small lakes affected by agricultural runoff really fit the bill. 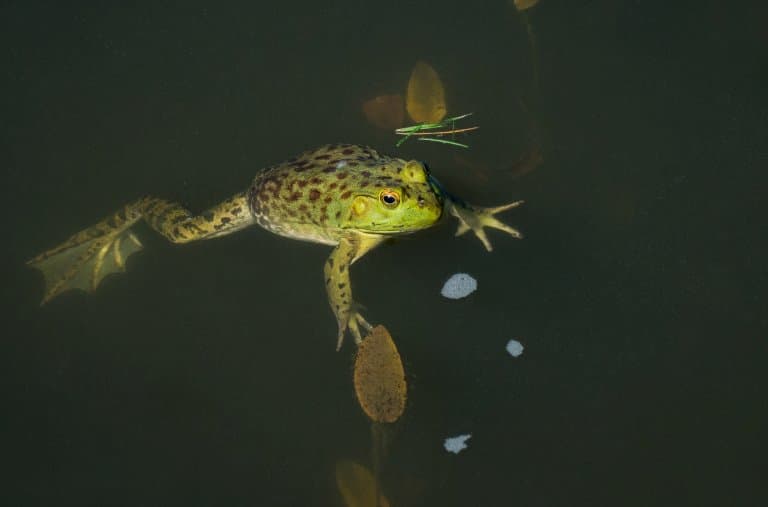 Bullfrogs are very skittish and hard to catch, but they are hunted and eaten in some areas of Southern and Midwestern US.

Their legs are cooked and eaten like small chicken drumsticks! Yum.

As well as food, they are also often used by science classes for dissection in education.