The story of the Alpine Ibex is a rollercoaster. Treated as a walking pharmacy from as far back as the middle ages, then saved from the brink of extinction by a poacher, and currently breeding with local goats with impunity, this large, charismatic mammal has had a wild ride. 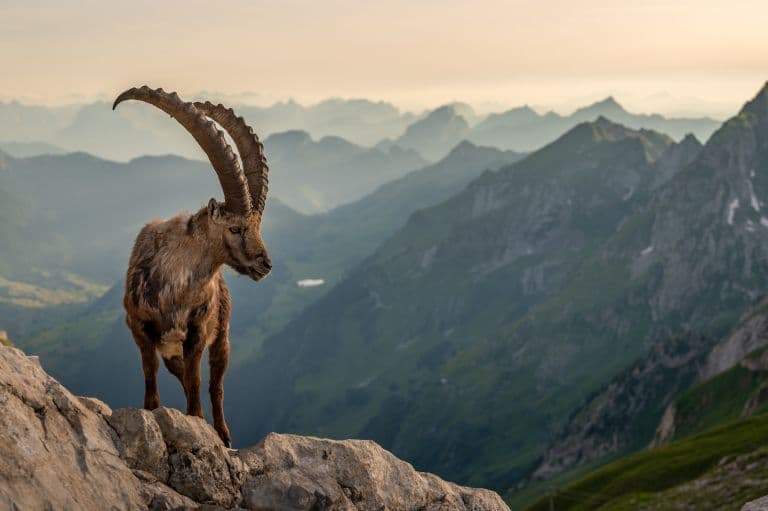 The Alpine Ibex is a large mountain goat with horns that curve backwards over its head and powerful, muscular frames on spindly legs. Despite this, they’re incredibly agile; well adapted to their mountainous habitats, and are not typically aggressive.

They are one of the most iconic animals in the mountains of Europe and have equally revered cousins dotted around mountain ranges all over the world.

There are 6 species of Ibex in total, which include the Alpine Ibex, the Nubian Ibex, the Walia Ibex, Spanish or Iberian Ibex, the Asiatic or Siberian Ibex and the Wild Goat which is also known as the West Asian Ibex.

The Alpine Ibex is also known as the steinbock and bouquetin and tend to live near the snow line in the mountains of the European Alps across Italy, France, Germany, Switzerland, Bulgaria, Slovenia and Austria. This is generally around 2,000-3,000 meters (6,000-11,000 feet) above sea level.

Alpine Ibex are social animals, although they tend to live in groups based upon gender and age, with adult male and female Ibex coming together to mate each year.

They are herbivourous and diet on grasses, leaves, flowers, moss and twigs. They are able to stand on their hind legs to reach for food higher in trees.

Their conservation status is currently classified as least concern by the IUCN, however they were historically near to extinction with fewer than 100 Alpine Ibex left in the world.

Before real medicine (and still to this day among some particularly stubborn populations) humans took the simple view that if a particular animal had horns, killing it and eating that horn could give them the horn, so to speak.

The Ibex was one of the victims of this nonsense and was hunted to almost extinction to meet the demand for Ibex horn as a cure for impotence.

Along with its blood, which was said to relieve kidney stones, the horn of the Ibex was the cause of its narrow escape from demise, as some populations dropped to less than 100 individuals. 1 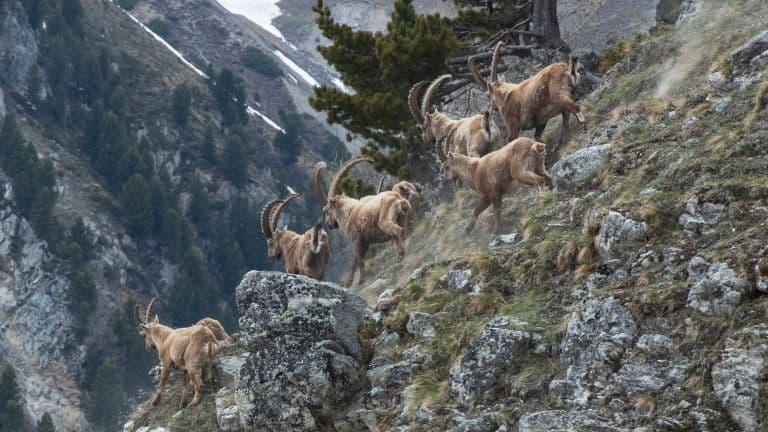 Thankfully, a ban on hunting came into place in the 1800s, and the advent of National Parks, along with animal exchange and reintroduction programs has seen their populations increase tremendously over the last decades. As of 1991, there were over 20,000 recorded individuals and by 2015 that number had jumped to over 55k.

There are some threats that remain, however, and a reassessment is encouraged to update our records on how well they’re doing now. 2

3. They can breed with goats!

One of the issues that animals face when coming back from the brink of extinction is the lack of genetic diversity. This is called a bottleneck and can mean that even though a population still exists, there isn’t enough diversity in its genes to protect them from various inbreeding issues.

The Ibex seems to have attempted a solution to this problem by mating with populations of domestic goats, whose habitats overlap with theirs. This isn’t as good a strategy as it seems, though, because ibex-goat hybrids tend to have very low fertility rates due to having too much genetic diversity.

Female horns are generally smaller, while males are longer and curvier. Their horns grow throughout their lives, and are used for fighting and protection. 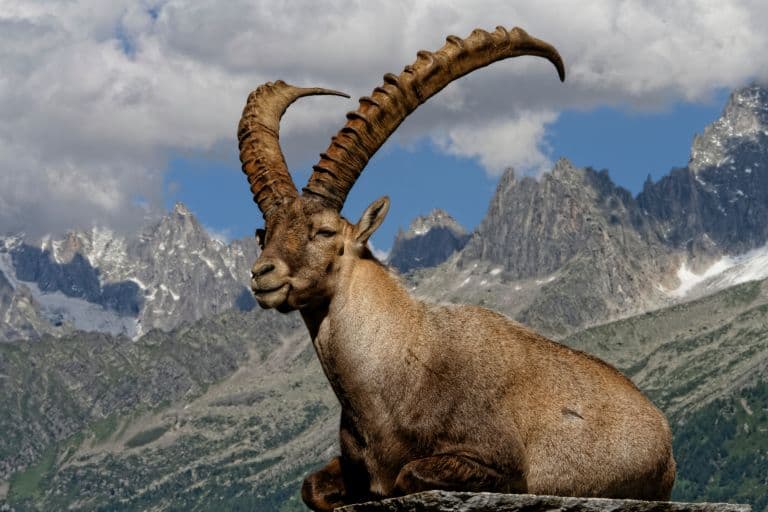 Straight up, without running!

They are super nimble and their hooves act like suction cups helping them grip to rocky terrain. 6. They climb dams for salt

In such unforgiving terrain, only the nimblest survive, and the Ibex is definitely a top contender for that position. They’ve been seen scaling the sheer faces of dams just to lick the mineral deposits carried through the rocks by water.

These mineral sources are one of the best ways for the ibex to get its electrolytes and valuable micronutrients, but one false step and the ibex could easily fall to its death. The Ibex is adapted to this frozen, craggy world with spit and independent hoof segments.

7. They have alternative mating strategies

When an animal lives to relatively old age, it suggests a form of reproductive success. Many animals, including Ibis, engage in high-risk, high-reward mating strategies, and this tends to lead males to shorter lifespans.

The Ibis has found a way around this by adopting alternative, low-risk mating strategies that allow them to remain viable for longer. When a strong male is tending to his mates, a subordinate can wait for an opportunity and sneak in as a female is running. This tactic allows younger, smaller males to avoid confrontation and improve their survival rates.

8. They don’t fight much, either

Another contributor to their extended longevity is their ability to resolve conflict using low-energy means. Fighting is, at the very least, energy-intensive, and can also lead to injury or death.

Ibex subordinates rarely challenge dominant males and instead refer to a seemingly predetermined dominance hierarchy that everyone agrees with and follows.

This means that the Ibex is one of the least aggressive and most diplomatic of the polygynous ungulates.

9. When they do fight, however…

Male Ibex do occasionally come to blows, and it’s terrifying. Males can have horns weighing 15kg and can stand well over 1.5m tall, before bringing them down on their opponents.

Males who are evenly matched will engage in brutal head-butting events to establish dominance, the echo of which can be heard throughout the mountains.

10. They have a small heart

Demonstrated by their mating strategies and diplomacy, the Alpine Ibex is well adapted to conserving energy in the frigid Alpine environments. Another way in which they spend less on resources is by having a reduced heart and slow metabolism.

As such, they adopt certain ectothermic, or cold-blooded, animal strategies such as basking in the sun on warm rocks, to reduce the need to draw upon fat reserves in the winter. 3

11. They occupy the same order as Killer Whales

The Alpine Ibex is a member of the order Artiodactyla, which refers to their feet being even-toed. These animals typically bear weight on two of their five toes, and the order contains pigs, deer, camels and other similar, terrestrial, animals.

Strangely, cetaceans also fit into this category. It turns out their ancestors were even-toed ungulates, and, having moved back into the water, their toes became more vestigial, or adapted into flippers for swimming. This is easier to imagine if you consider that a hippo is part of this order, and represents a sort of missing link between terrestrial Artiodactyla and their marine counterparts.